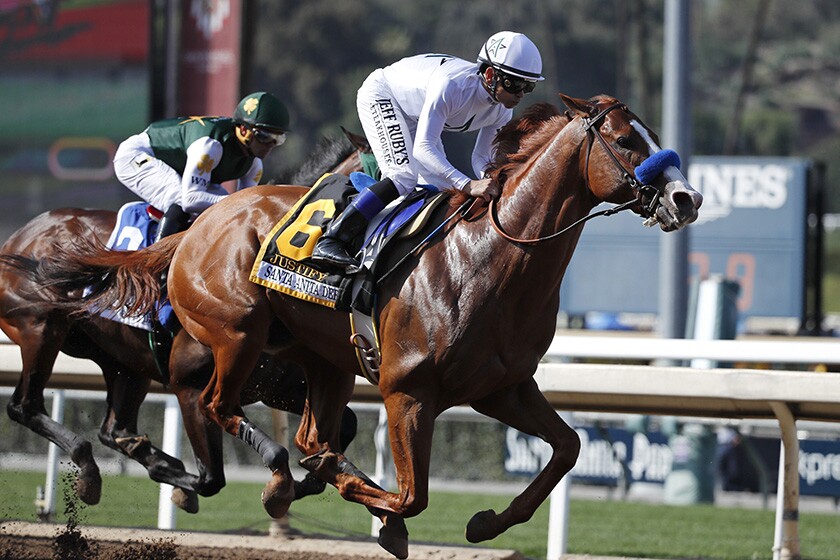 The California Horse Racing Board has agreed to file a complaint and schedule a hearing in regard to Justify’s win in the 2018 Santa Anita Derby as part of a lawsuit settlement with Mick Ruis, owner and trainer of second-place finisher Bolt d’Oro.

Justify was one of seven horses at the track, including a second thoroughbred in trainer Bob Baffert’s barn, who tested positive for scopolamine, a compound commonly found in jimson weed. Most veterinarians agree that scopolamine is not a performance enhancing substance. It is believed that the compound was introduced through feed contamination. Because of how it was ingested, the presence of scopolamine in the horses was considered a poisoning rather than a drugging.

The normal procedure in response to the positive tests would have been for a complaint to be filed with the board against the horse’s trainer under the “trainer’s insurer rule,” which makes trainers responsible for anything that happens to their horses, even if they were not directly involved.

In this case, the CHRB did not act for several months until the matter was brought up in closed session during a meeting in August 2018. The case was dropped at that point. The positive test did not become public until a year later, when it was reported by the New York Times.

At this point, any disciplinary action would only affect the distribution of purse money and would not change Justify’s status as the 13th winner of the Triple Crown. The Santa Anita Derby, in a normal year, comes one month before the Kentucky Derby, and any case against the colt could not have been settled in time to result in his being disqualified from running at Churchill Downs or the other Triple Crown races. Drug cases are rarely adjudicated quickly, and appeals can take up to a year or longer.

How the CHRB handled the case and the purse money led to the lawsuit by Ruis.

“It is only fair that the current CHRB voted to finally have a hearing related to the Justify matter,” Ruis said in a statement released by his attorneys. “This settlement would be a major step toward restoring public confidence in the CHRB.”

Since the closed session in 2018, the board has undergone significant change. At that meeting, three current members were on the board: Greg Ferraro, Dennis Alfieri and Alex Solis. Ferraro, a veterinarian, replaced Chuck Winner as chairman, and Oscar Gonzales, a new member, was elected vice chairman, replacing Madeline Auerbach. Two other current members — Wendy Mitchell and Damascus Castellanos — were not on the board at that time.

The board voted to accept the settlement proposal in closed session after the July 16 teleconference meeting. It has not been filed with the court yet. The CHRB has no financial responsibility in the settlement.

“This legal action was never just about the purse money, I wanted to stand up for what’s right and to make sure that every horseman, from the little guy to Bob Baffert, is treated fairly and equally,” Ruis said. “I commend the current CHRB for reviewing this matter and look forward concluding negotiations regarding a public hearing.”

Baffert is currently embroiled in another possible banned substance case, this time with the Arkansas Racing Commission. Charlatan and Gamine were disqualified for having lidocaine in their systems after racing at Oaklawn on May 2. Baffert contends the horses ingested the drug when an assistant, who had applied a pain relief patch to his back then touched tongue ties used on the two horses, causing the transference. Both cases will be on appeal.

No date for the Justify hearing has been set. Mike Marten, CHRB spokesman, said that because no settlement has been signed the CHRB has no comment.

How Lakers assistant Lionel Hollins is helping from home