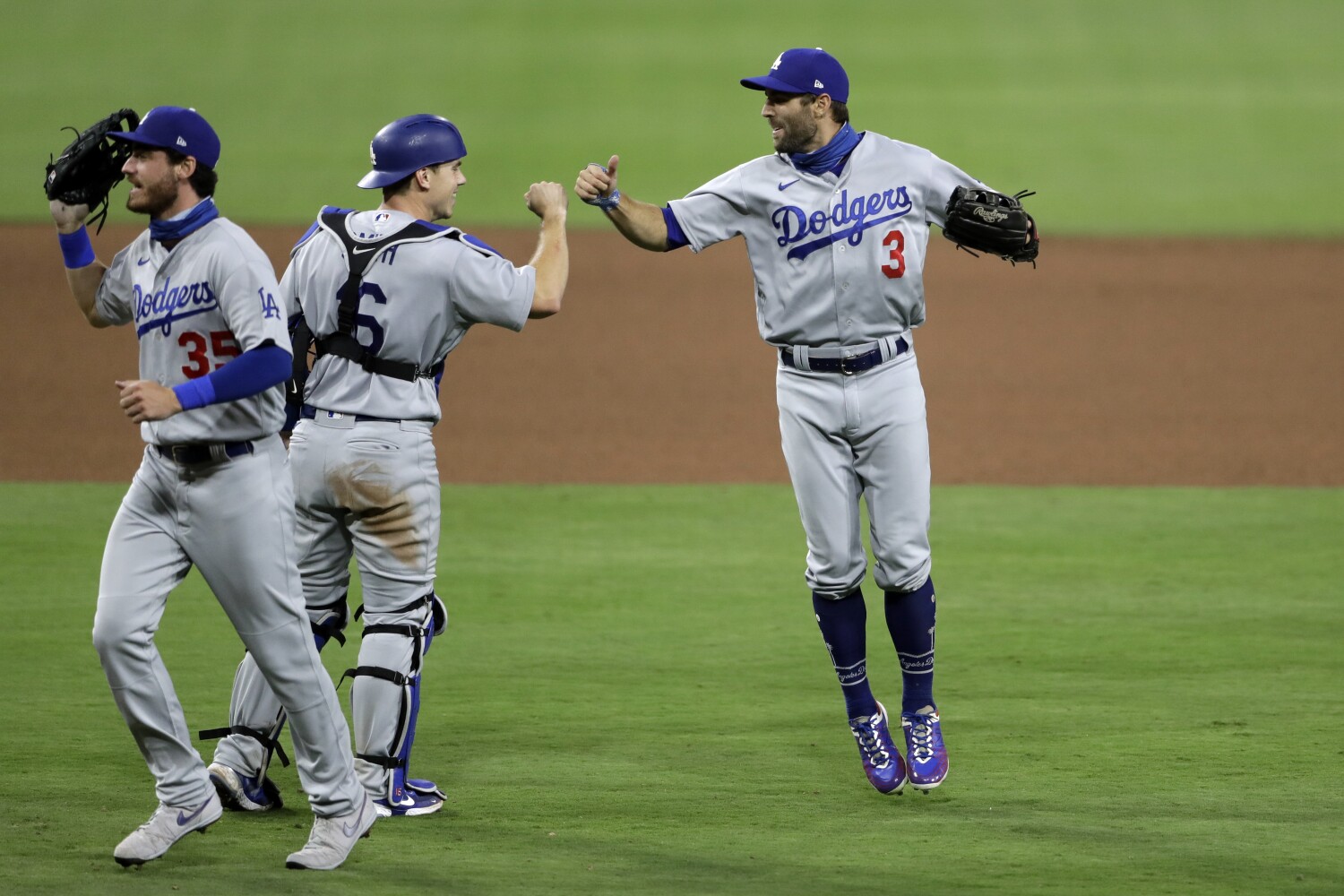 Consider the situation: A one-run lead with one out and a baserunner standing at third.

Or the stakes: The 27th out on the line, a series-deciding rubber match in the balance.

However you calculate it, Chris Taylor’s game-winning outfield assist Wednesday night, when the utility man one-hopped a long toss from left field to throw out San Diego Padres’ runner Trent Grisham at home plate and seal a 7-6 Dodgers win, was quite the sight.

“A huge play,” manager Dave Roberts said. “To come in and make a strong, accurate throw, he just does so many things.”

Added Joc Pederson during a postgame TV interview: “It was incredible. You couldn’t have wrote it up better.”

Starting pitcher Ross Stripling chimed in on Twitter, writing “CT93.3!” in reference to Taylor’s nickname and a throwing speed that was a tick higher than Stripling’s average fastball velocity Wednesday.

“I don’t think I’ve ever ended a game on the defensive side like that,” Taylor said.

And if not for a series of improbable factors, the situation may have never arisen.

Taylor is an infielder by trade but has played every nonpitching position except catcher and first base in his career. He was forced into left field Wednesday because an injury to usual right fielder Mookie Betts forced Roberts to shuffle his outfield and move Pederson, who normally plays left when he’s in the lineup, to the other corner.

The game also looked well in hand hours earlier, with the Dodgers leading by as many as five before the Padres chipped away with two runs in the sixth, one in the eighth and another in the ninth.

But when Manny Machado stepped to the plate with one out in the ninth, it looked like closer Kenley Jansen was on the ropes and the upstart Padres were on the verge of stealing a three-game set from the seven-time defending NL West division champions.

Machado connected on Jansen’s first offering, a line drive that left his bat at 88.5 mph. According to Statcast, the expected batting average of Machado’s ball was .500. The chances of it at least producing a sacrifice fly to tie the score were surely higher than that.

“Had to be a perfect throw,” Padres manager Jayce Tingler said.

Taylor made the catch on the move, shuffled his feet while transferring the ball to his right throwing hand, then flung his arm and body at the plate.

“Manny hit it pretty low, so I feel like I got a good jump,” Taylor said. “I don’t think he really got into it. Luckily, my momentum was already taking me in and just tried to get rid of it as quick as I could and give [catcher] Will [Smith] an easy one-hop.”

The ball raced Grisham home, bouncing off the infield grass as the baserunner went into a sideways slide.

Had the thrown been a foot higher or further outside, Grisham might have been able to sneak past Smith’s tag. But the ball sailed perfectly into Smith’s waiting mitt, enabling a one-handed tag that brushed Grisham’s shoulder and rib cage a split-second before his left hand swiped the plate.

“Chris has done so much to help us win baseball games,” Roberts said. “He’s a manager’s dream, always ready when called upon and seems to impact the game every time he’s in there.”

Taylor previously had 10 outfield assists in his career. None were likely as suspenseful, however, nor quite so significant given this year’s shortened 60-game schedule and the Padres’ increasingly apparent status as serious NL West challengers.

“That was an exciting series,” Taylor said, comparing the atmosphere to a postseason setting even without fans in attendance. “To get a series win against that team, it was back-and-forth and hard-fought and they’ve got a lot of talented players, young players. They’re trying to make a statement.”