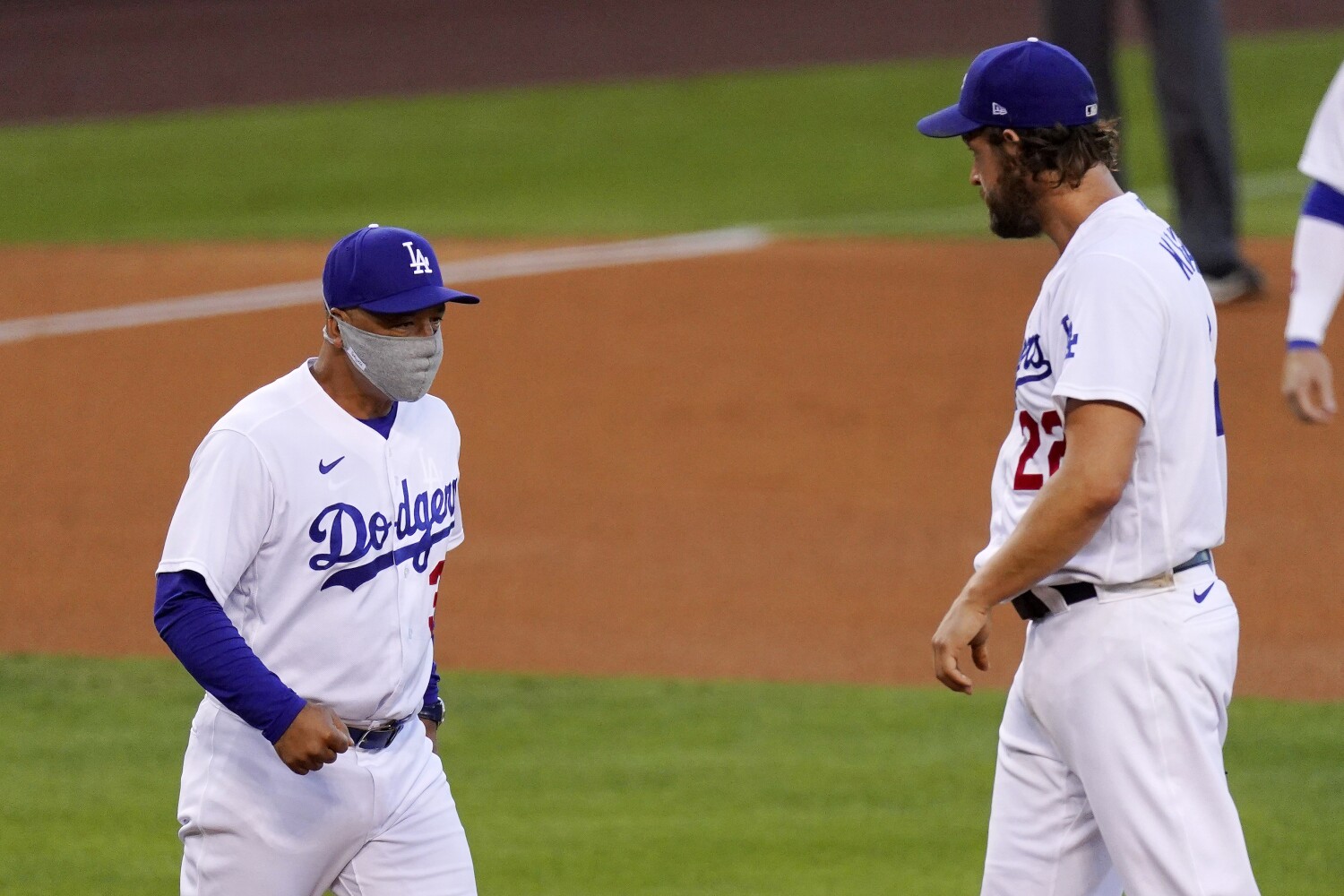 Clayton Kershaw left one hand on his hip, glanced quickly toward the sky, then slowly paced around behind the mound.

A week after gliding through almost six scoreless innings in an auspicious season debut, the Dodger ace had stumbled once more Saturday. For the third time in five innings, the San Francisco Giants had taken the left-hander deep. For the first time in 2020, the 32-year-old ran into trouble.

Kerhsaw’s outing didn’t last much longer in the Dodgers’ 5-4 loss. Instead of building upon his near-flawless outing from six days earlier, he went back to battling his biggest issue from 2019, haunted by the long ball again in a four-run, 4⅓-inning setback.

Kershaw appeared to miss his spot on both pitches, leaving each four-seamer up in the zone after catcher Austin Barnes set up low on the left-hander’s glove side.

The third home run wasn’t as much of a mistake, as Slater got to a first-pitch slider at the knees for another solo shot two innings later. But Kershaw couldn’t recover, getting the hook after allowing back-to-back doubles to Donovan Solano and Yastrzemski in the next two at-bats.

“Just had a couple rough innings there,” Kershaw said. “They did a good job. With two strikes they battled. Had good at-bats. Did a good job all the way through.”

The Dodgers’ offense wouldn’t come to life until much later, catching a huge break at the start of a four-run sixth inning.

With Giants starter Johnny Cueto working on a no-hitter, Kike Hernandez led off the frame with a high fly ball to left. It should have been a routine catch for veteran outfielder Hunter Pence. Instead, he lost it in the dim evening sky, breaking toward the infield as the ball carried toward the warning track.

By the time Pence heard the ball land with a thud some 50 feet behind him, Hernandez was already pulling into third. And after he scored on an Austin Barnes grounder, Justin Turner mashed a hanging curveball later in the inning to left for a two-out, three-run homer.

That cut the Giants’ lead, which had swelled to five after Dodgers reliever Brusdar Graterol surrendered a run in the top of the frame, to one.

But the Dodgers would get no closer, their comeback bid stifled by a Giants bullpen that allowed only one baserunner in the final three innings. The Dodgers finished the night with a season-low two hits.

The teams will face off in a rubber match Sunday. Walker Buehler will take the mound for his third start of the season.

Kershaw at times had problems keeping the ball in the park last season, allowing a career-high 28 home runs despite making his eighth career All-Star game and posting a 16-5 record. On days an opponent hit a big fly, he was just 9-4 with a 4.41 ERA. In his last appearance of the campaign, he infamously allowed back-to-back home runs in Game 5 of the NLDS.

That wasn’t the case Saturday, as Kershaw suffered his ninth career game of at least three home runs against.

“The command,” Kershaw said, “just wasn’t quite as good tonight.”

Three observations on the Dodgers

— Chris Taylor filled in at shortstop for the injured Corey Seager, who missed Saturday’s game with a back injury. Scans on Seager’s back came back clean Friday night, and manager Dave Roberts said Seager would be day to day as he receives treatment.

— Max Muncy told SportsNet LA before Saturday’s game that he suffered a finger fracture during training camp. Muncy said he’s healthy now, though has slumped to begin the season.

— Brusdar Graterol allowed another run Friday, surrendering a sacrifice fly in the sixth inning to raise his earned run average to 5.40, the highest for any Dodgers reliever with at least two appearances.