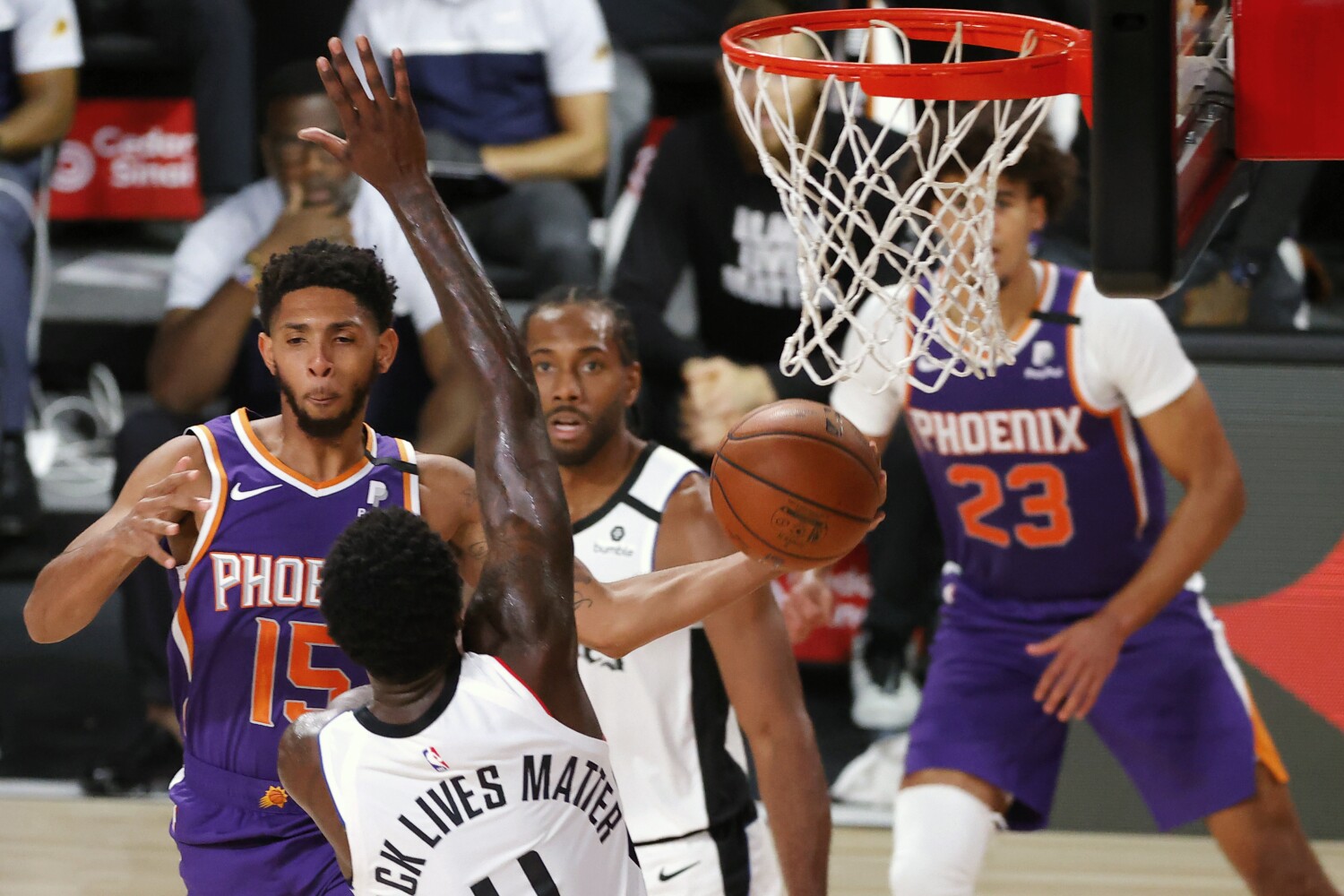 The race for the Western Conference’s second seed in the postseason grew tighter Tuesday after Phoenix’s Devin Booker made a game-winning shot in the final seconds to beat the Clippers 117-115.

The Clippers (45-22) are now one game ahead of third-place Denver (44-23) with five seeding games to play. The Nuggets, who did not play Tuesday, have six games remaining.

Here are five takeaways from the Clippers’ defeat:

1. Clippers coach Doc Rivers has said that backup forward JaMychal Green adds “such a dimension” to the team’s smaller lineups because of the range the 6-foot-8 veteran provides when playing center. He continued to display what his coach meant against the Suns by scoring 10 points off the bench and making two of his four three-pointers. In three seeding games, Green has made seven of his 13 three-pointers.

Green’s opportunities at center have increased with the absence of backup center Montrezl Harrell, but the expected return of Harrell — a more traditional, back-to-the-basket scorer — won’t necessarily dim Green’s usage. He and Harrell have played together an average of 17.6 minutes per game this season, with the Clippers outscoring opponents by 3.1 points per game during that span.

2. Ivica Zubac’s final pass, which was tipped by Phoenix’s Mikal Bridges and eventual led to Booker’s game-winning shot, marred what was otherwise the starting center’s best game yet in the bubble after scoring a season-high 18 points to go with 12 rebounds. Rivers has consistently played Harrell over Zubac in fourth quarters this season, largely because of the reasoning that the team needs another offensive option late in games, but Zubac acquitted himself well during the Clippers’ fourth-quarter comeback Tuesday until the very last moment.

“I thought he was good, honestly,” Rivers said. “I thought as a group we just had so many mental errors. Zu was included in that. So his numbers were great, but he’s a better player than he even played today.”

3. Starting guard Patrick Beverley did not return to the game after leaving in the second quarter because of soreness in his left calf. He finished with four points and two rebounds in eight minutes. Rivers said the team would be “very cautious” in handling Beverley’s recovery.

Despite sitting out, Beverley did not disengage from the game. In fact, he moved from his assigned seat to be closer to the team’s front row of assistant coaches in Tuesday’s final minutes, where he barked out instructions seated next to coach Sam Cassell.

4. Starting forward Marcus Morris produced his most promising performance of the restart by making six of his eight shots, including three of his four three-pointers, for 16 points. Morris has made just 27% of his three-pointers since joining the team by trade in February, a far cry from the 43% of three-pointers he made during 43 games with the New York Knicks prior to the trade.

“In New York, he got the ball 20 times so it’s really … if you’re judging him on that, that’s unfair,” Rivers said before the game. “Really, what we need him to do is be a good player and he’s doing that. He’s spacing the floor and he’s just gonna get more and more comfortable when he needs to be aggressive and when he needs to get PG and Kawhi be aggressive and Lou and other guys.

“He’s playing on a team now where there’s a lot of good players, so clearly he’s not gonna get the same shots he did in New York and that, again, will affect his numbers.”

5. Rivers cautioned before the game that guard Lou Williams would play under a minutes restriction that hinged on how his lungs felt after spending the last 10 days in quarantine. Yet Williams played 21 minutes, which was more than Rivers said he expected. Throughout the NBA restart, Rivers has preferred to throw his roster’s new arrivals into games as quickly as possible to build up their conditioning and Williams was handled the same way. He’d cleared quarantine only hours before tipoff Tuesday.