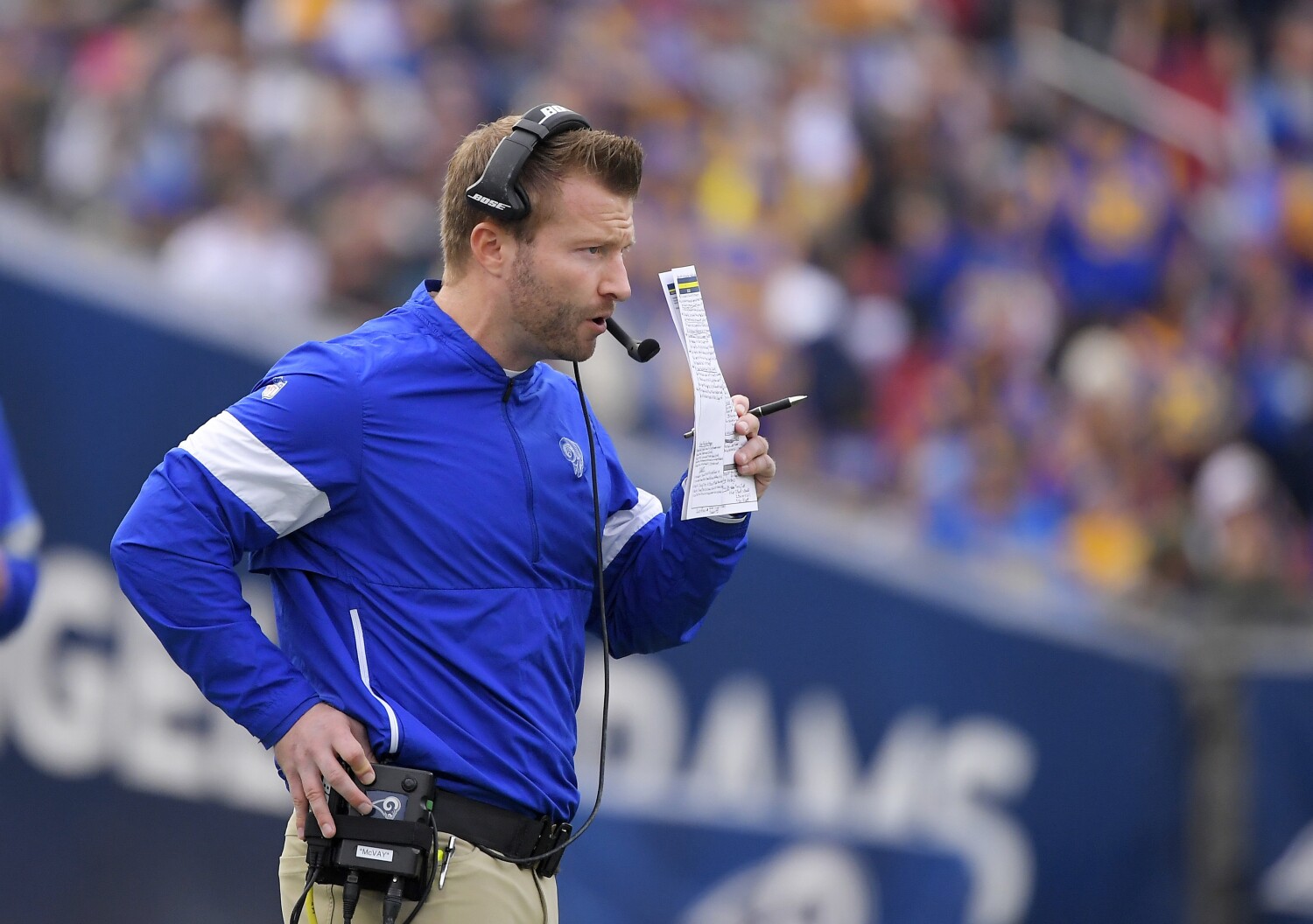 It’s been more than seven months since Rams coach Sean McVay met with players and coaches together — and in person — at the same time.

The COVID-19 pandemic forced NFL teams to conduct virtual offseason programs, so the Rams have not had a non-virtual team meeting since Dec. 30, the day after their 2019 season ended and they went home to watch other teams compete in the playoffs.

McVay, 80 Rams players and the coaching staff finally will gather Monday, following social-distancing protocols, beneath a large, open-air tent at the team’s Thousand Oaks facility for the start of training camp, which will be conducted in several phases.

“I’m just excited to see these guys in person and be able to have a meeting and go out and walk through,” McVay said Sunday during a videoconference. “Now, would I like to be able to practice a little bit sooner than mid-August?

“Of course. But everybody’s got to follow these guidelines.”

During a videoconference in June, McVay expressed skepticism about following protocols and playing football during a pandemic.

“We’re going to social distance, but we play football?” he said. “Hey, this is really hard for me to understand all this. I don’t want to be … I don’t get it. I really don’t.”

“I feel a lot better now having a little more knowledge,” he said. “It’s really about the risk mitigation.”

The Rams have had at least five players touched by the pandemic.

Offensive linemen Brian Allen tested positive for the novel coronavirus during the spring, and offensive lineman Andrew Whitworth tested positive earlier this summer. Both recovered, and they reported to the facility with other players early last week. All players must test negative three times before they are cleared to participate in team activities.

Rookie edge rusher Terrell Lewis and undrafted free-agent defensive lineman Michael Hoecht were placed on the COVID/IR list because they either tested positive or were in close contact with someone who did. Hoecht was removed from the list and added to the roster Sunday.

“Having that testing every day for the first two weeks is going to be extremely important to make sure guys are in the right place and feel safe and the anxiety level is low for that kind of stuff,” Whitworth told reporters last month.

Starting Monday, and continuing through Aug. 11, there will be an acclimation period, with players limited to one hour of weight room work and one hour of on-field conditioning in small groups. Walkthroughs can be 60 minutes in the first week, 75 in the second.

Non-contact workouts begin Aug. 13, and contact begins Aug. 18. Rosters must be trimmed to 53 players by Sept. 5.

The Rams are scheduled to open the season Sept. 13 at brand-new SoFi Stadium against the Dallas Cowboys on “Sunday Night Football.”

They will do it with a different roster and staff than the team that finished 9-7 last season and did not qualify for the postseason for the first time in McVay‘s three seasons.

Running back Cam Akers and wide receiver Van Jefferson are among nine rookies selected in the draft who will on the field with coaches and teammates for the first time.

McVay said the Rams would scrimmage a few times at SoFi Stadium before the opener.

“It will be newer challenges, things that we’ve never navigated through,” McVay said of his fourth training camp as a head coach, “but I am very confident with the plan we have in place.”

McVay said he did not anticipate more players opting out. But he said he would support anyone that chose to do so because of health concerns for themselves or family members.

The NBA is staging its rebooted season in a bubble near Orlando, Fla., and has not experienced any COVID-19 outbreaks.

But Major League Baseball’s season, which like the NFL is not being conducted in a bubble environment, has been affected by outbreaks among the Miami Marlins and St. Louis Cardinals.

“You hate to see it affecting baseball and how quickly it can spread throughout a team if you aren’t following those things outside the building,” McVay said, adding, “That’s going to be part of how we have a successful season, is guys successfully handling themselves in the right way with regards to the risk of mitigation.

“We’ve always just talked about handling yourself in a professional manner outside the building for just good decision making, and now that’s an added part of it as we navigate through this.”

Martin Jarmond arrives at UCLA eager for his greatest challenge

Josh Rebholz is not a finalist for UCLA athletic director job