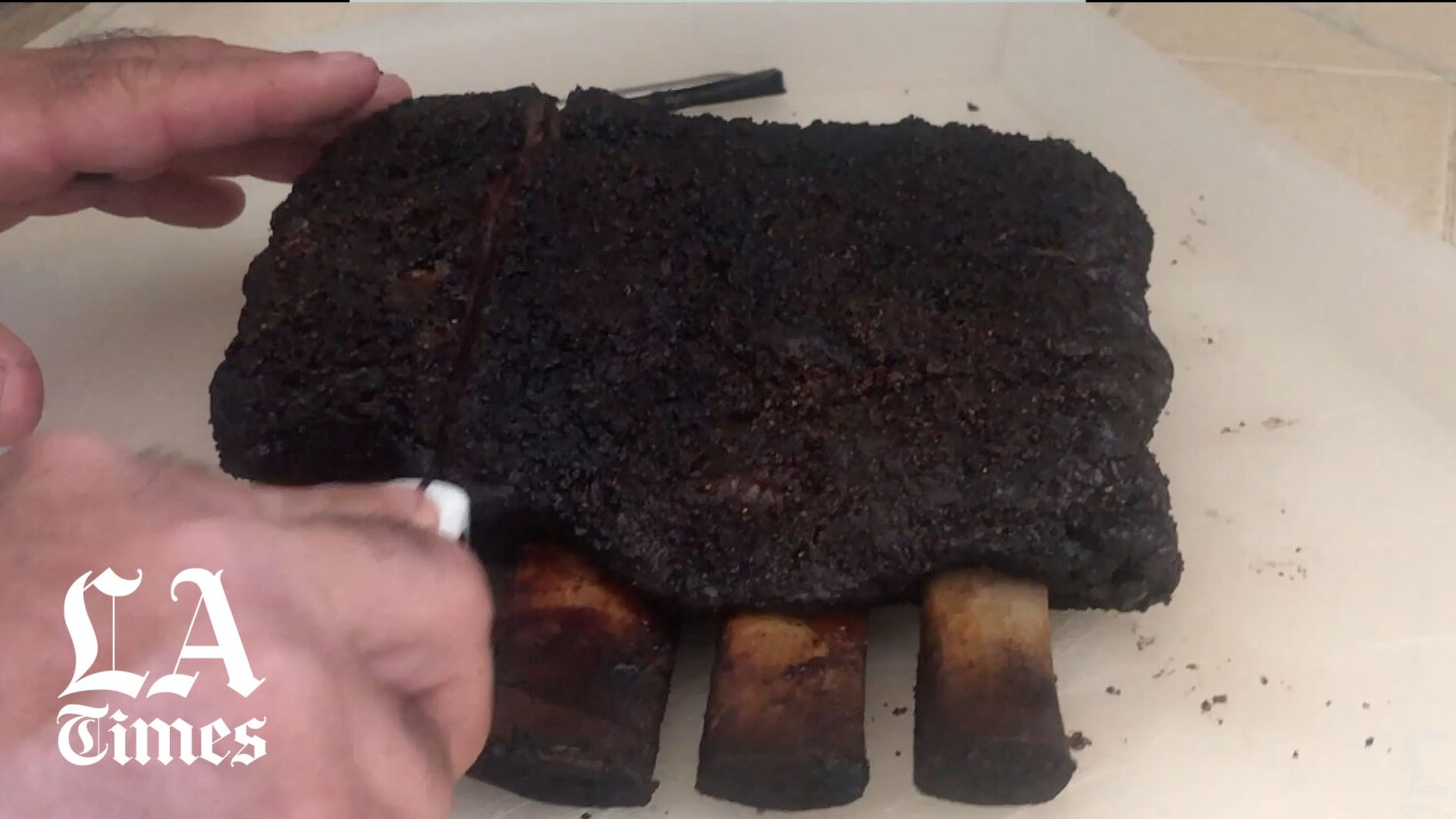 Two giant Texas-style beef plate ribs have been placed in the massive smoker in the backyard of Nick Garcia’s house in North Hills. He pushes a button to set the temperature to 285 degrees, and soon small pieces of red California oak being used as fuel produce rising blue smoke. The aroma is so intoxicating that you begin to understand why the summer of 2020 won’t be remembered only for the COVID-19 pandemic disrupting life in Southern California.

This is also the summer in which coaches discovered a new passion for spending hour upon hour learning how to barbecue ribs, chicken, steak, links and brisket in their backyard smokers and grills. Many have been home since March, when schools closed, and all that free time is leading to an all-out assault on smoking meat.

“Barbecue is just like coaching and being an athlete. The more you do it, the better you get at it and the more tricks you learn,” said Garcia, the strength and conditioning and shotput coach at Sherman Oaks Notre Dame.

In a normal summer, Garcia would be busy directing players in the weight room during the week and spending time Saturdays at passing tournaments, leaving little time for cooking other than Sundays. But the stay-at-home orders from the coronavirus gave him extra time to continue to master a craft that motivated him to go to BBQ school to learn Texas-style cooking.

He has visited Austin, Texas, numerous times to learn tricks of the trade and sample finished products of competitors. The fact he has lost 90 pounds from a once 300-pound frame with a diet focusing on eating meat and vegetables only adds to his BBQ passion.

His wife, Cristina, the athletic director at Granada Hills, didn’t marry him just for his cooking skills, but she sure isn’t complaining because he is doing much of the cooking these days. And they’ve got a new dog, a black Labrador retriever named Viper who likes diving into their pool looking for balls and begging for leftover bones.

Garcia has plenty of company in spending time in the backyard. Seemingly every weekend, Sylmar baseball coach Ray Rivera shows off his backyard grill sessions with examples of ribeye, beef ribs, links, brats and spare ribs.

He got a smoker for a present and has picked up cooking ideas from talking to people at food trucks and attending competitions.

“I’ve taken from different guys I’ve observed,” he said. “I feel like you never have it figured out like coaching. You keep picking and choosing and making it your own.”

His specialties are baby back ribs and spare ribs and he has been cooking more than ever. “You can’t go out. You can’t go to a restaurant, so you might as well do it,” he said.

Birmingham baseball coach Matt Mowry has a brother who owns a meat market, and for the time being he’s home more than his wife, so he’s doing 95% of the cooking. “My baby back ribs, the meat falls off the bone,” Mowry said.

Granada Hills baseball coach Matt Matuzak, known for being a perfectionist in taking care of his field, just bought a new smoker, so who knows what kind of smoke will be rising from his house for the rest of the summer.

There are no polls or surveys proving that coaches are on a BBQ/grilling binge, but Garcia certainly is “kicking it up a notch,” to paraphrase chef Emeril Lagasse. He has four smokers in his backyard and on a recent Saturday created two slabs of beef plate ribs that were so tender, moist and juicy that they could have been sold at any high-quality BBQ restaurant.

Last year, Garcia invited 23 shotputters to his backyard for a party and cooked nine racks of ribs, five tri-tips and two gallons of chili. There were no leftovers. “It was pretty good,” former Notre Dame shotputter Quintin Lyons recalled. “I had 10 ribs.”

Garcia starts his cooking with preparation the night before. He creates a rub made up of pepper, kosher salt, Lawry’s seasoning salt and garlic powder. He first uses a binder on his ribs made up of mustard and pickle juice, then adds the rub and leaves the ribs in the refrigerator overnight for the spices to blend.

The next morning, the smoker is warmed up and two $90 temperature gauges with Bluetooth technology are placed into the ribs so Garcia can monitor their temperature on his smartphone while they cook for seven hours. Every hour, he uses spritzer water on the ribs to keep them moist. By the time they come out of the smoker and are cooled off for two hours, they have a dark crust and are as soft as butter when he slices them.

“You hope and pray it turns out good,” he said.

Angels’ plans for Jo Adell still up in the air