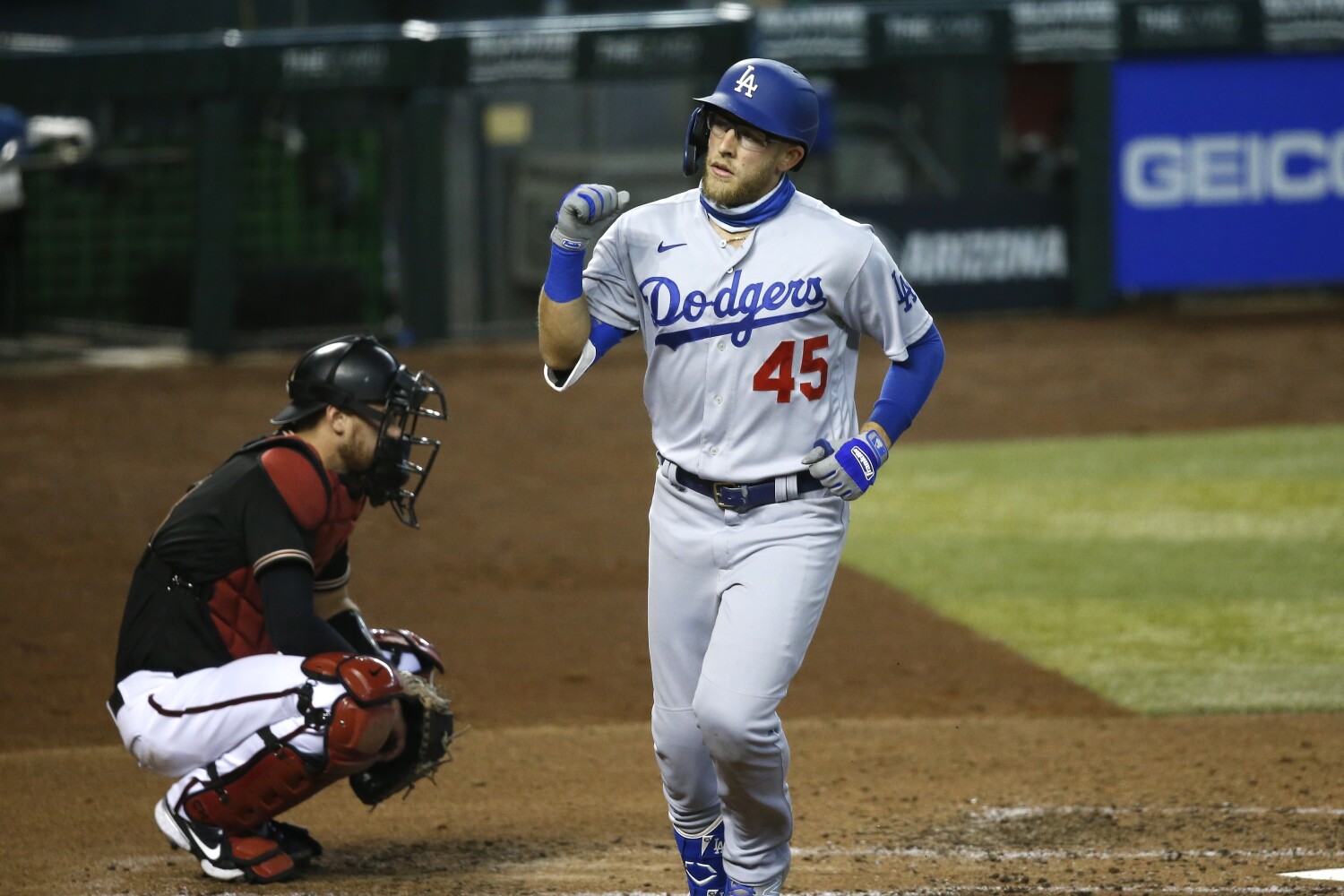 Cody Bellinger still joked with hitting coaches, laughed from behind his Dodger-blue face covering and frolicked around the batting cage between his turns to swing.

If the reigning National League MVP was bothered by being removed from Saturday’s lineup — given an early day off amid a five-for-36 start to the season — he didn’t show it during a pregame hitting session.

“He wanted to be in there tonight,” manager Dave Roberts said. “But I just felt [it was time] to give him a little blow, get Matt Beaty in there, give him some at-bats, and get Cody back in there tomorrow.”

The plan worked. Bellinger got some extra cage work, Beaty hit a home run as part of a mid-game ambush from the Dodgers’ offense, and Roberts watched his team cruise to an 11-2 thumping of the Arizona Diamondbacks — depth and development working hand-in-hand as the Dodgers improved to 4-1 on this nine-game road trip and 6-3 on the season.

Bellinger’s absence was the biggest pregame story. The center fielder had faltered in the season’s first eight games, suffering from summer swing changes that failed to translate to the regular season and trademark power that was nowhere to be found.

Bellinger entered Saturday near the bottom of the majors in traditional stats (a .139 batting average, .372 on-base-plus-slugging percentage and only one extra-base hit in 39 trips to the plate) and advanced metrics (according to Statcast, he had a well-below-average “hard hit percentage” of 16.7 and was grounding more than half of his batted balls).

Even with the Diamondbacks starting a right-hander in Luke Weaver, Roberts elected to give Bellinger a break after an 0-for-16 slump.

“I don’t think he looks completely comfortable, he’s still trying to figure some things out,” Roberts said during a pregame videoconference call, arguing that close calls and bad counts had saddled Bellinger while also acknowledging the two-time All-Star is now trying to revert back to his 2019 mechanics.

“In the initial summer camp, [his swing change] was more drastic,” Roberts added. “I think over the last five to seven days, he’s trying to go back to what he did last year. Optically, it looks similar, but the production just doesn’t happen quite that easy.”

Bellinger appeared to take a positive step during pregame batting practice, launching several pitches over the wall in right. After one impressive stretch of hard-hit line drives, Roberts applauded in approval.

“I’m very confident [of] him getting back to what he did last year,” Roberts said. “He’ll find some comfort in his swing. I know the production will be there.”

The Dodgers didn’t miss a beat without him Saturday. Rookie Edwin Ríos erased an early one-run deficit by smashing a two-run homer 434 feet in the fourth. Beaty lined his first long ball of the season around the left-field foul pole two batters later.

In the fifth, the Dodgers scored five runs before recording an out, courtesy of a two-run Justin Turner triple, Joc Pederson RBI single and AJ Pollock two-run homer. In the eighth, Chris Taylor deposited a three-run blast in the right-field bleachers.

Trump calls for Bubba Wallace to apologize for noose ‘hoax’

This day in sports: Ervin Santana throws no-hitter for Angels