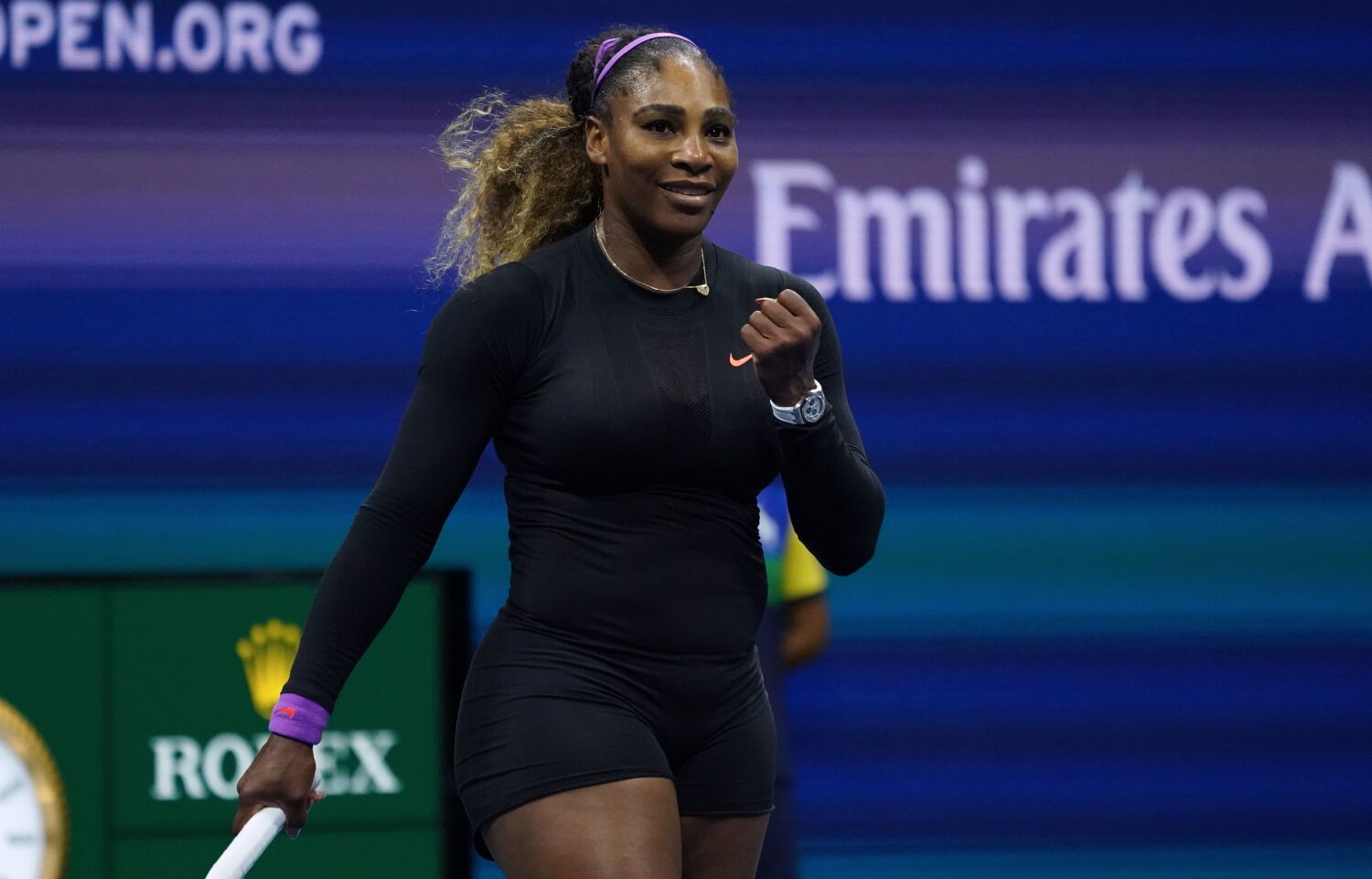 When Serena Williams left her luxurious bubble in Florida to play her first matches in six months, she packed a few dozen face masks and a new sense of perspective along with her tennis gear.

“One thing I have learned with this pandemic is don’t plan,” said Williams, who estimated she travels with 50 masks because of concerns about COVID-19. “I’m literally living for the day and for the moment and in a good way, but I’m not making plans too far out.”

Williams hasn’t competed since February, when she split a pair of Fed Cup qualifying matches against Latvia at Everett, Wash. Her last tournament action was at the Australian Open, where her pursuit of a record-tying 24th Grand Slam singles title ended with an upset loss to Wang Qiang of China in the third round.

Normally she wouldn’t have considered playing in the Top Seed Open, a first-time Women’s Tennis Assn. event that will begin on Monday in Nicholasville, Ky., but the timing works well for her and so does the short travel from her home. Williams, who will be 39 on Sept. 26, has self-isolated in Florida with her husband, tech entrepreneur and investor Alexis Ohanian, and their daughter Olympia, who will be 3 on Sept. 1. Williams has shared images on social media of playing dress-up with Olympia as well as playing tennis with the adorable toddler on a court her husband had built, but it’s time for Williams to go back on the road and back to work.

That process starts with the first WTA event to be held in the U.S. since the sport shut down in March. The field is scheduled to include Wlliams’ older sister Venus, 2017 U.S. Open champion Sloane Stephens, Victoria Azarenka, and 16-year-old sensation Coco Gauff. It’s a useful lead-in to the Western and Southern Open, which was moved to New York from Cincinnati this year, and to the U.S. Open, which is scheduled for Aug. 31-Sept. 13 in New York. All will be played in front of empty stands.

“I’m excited. There won’t be fans here — it’s all virtual — but it’s cool,” Williams said Saturday during a Zoom session on site in Kentucky. “We’ve been stuck at home for six months and a part of me, every part of me, loved it actually because I haven’t been home that long since I was literally a teenager. Even when I was pregnant I was traveling a lot, so I was in so many different places. So it’s been a long time since I was home that long. And it was nice.

“But it’s also a really cool opportunity to come to Kentucky and be isolating in a different place. It’s the same thing all over again, but it’s nice to kind of get out, I guess, because I’m so used to traveling, but I’m still trying to see how I like everything.”

She’s armed with her masks and caution born of her history of blood clots. “I don’t have full lung capacity so I’m not sure what would happen to me. I’m sure I’ll be OK, but I don’t want to find out that kind of thing,” she said of her vigilance. “I’m super, super careful with what I’ve been doing, and everyone in the Serena bubble is really protected. Yeah, it’s cool to play tennis, but this is my life and this is my health, so I’ve been a little neurotic to an extent, but that’s just what I have to be right now.”

The enforced time away from competition could work in her favor. When she returned to the tour in 2018 after a difficult pregnancy that included an emergency caesarean delivery and surgery made necessary when she developed blood clots, she often seemed behind in terms of regaining her fitness. She also incurred some injuries that prevented her from getting essential tournament experience.

Everyone is returning on roughly the same level now, with little or no match play and a foundation only of the fitness work they’ve done the last few months. Williams had to make some adjustments, such as finding new physiotherapists to replace her Europe-based associates, but she was able to hit while maintaining proper social distance from her partner and could work out on equipment she and her husband are collecting to stock a home workout facility.

“I wasn’t able to go to gyms but I’m also not bench-pressing. This is God-given, thank you very much to my mom,” she said, kissing her bicep. “The gym’s not quite done, but it’s cool. The tennis court is so fun. It’s like, I go there and it’s my own sanctuary. I’m like, why haven’t I done this 20 years ago? It’s really cool. It’s fun. We had a few players out there and I’m like, this is the U.S. Open surface, so come hit with me, come hit with me. I was just trying to get people to come.”

Her live-for-now mantra came into play when she was asked if she still plans to compete in the Tokyo Olympics, which were postponed until 2021. A four-time gold medalist — once in singles and three times in doubles — Williams isn’t ready to commit to another appearance. “That’s just looking too far ahead for me right now. I don’t know if Tokyo plans to be in Tokyo,” she said. “I’ll have to kind of wait to see what happens in the fall. I don’t know what to expect.”

Planning to play at the U.S. Open and a few weeks later the rescheduled French Open was as far as she was willing to go. “I see myself doing it all, if it happens. But like I said, I’m not planning for the future. I learned that as tournaments got canceled,” she said. “Every time one got canceled I was, ‘Just let me just work on today and focus on today and see what happens.’”

That’s true for everyone. “I feel almost like I’ve played through so many generations and so many different things, and I honestly feel cool to be able to play through this era so I can say, ‘I remember when it first happened.’ And that’s kind of how I’m trying to look at it,” she said.

“It’s something that the whole world is going through. It’s not just us as tennis players, or us as athletes. It’s literally the whole world that’s going through this pandemic right now and I think sport has been one of the few things that can actually provide almost like a good breath of fresh air or a sigh of relief to the people that are really still stuck in their homes.”

Santa Anita suffers its 15th horse death of the season