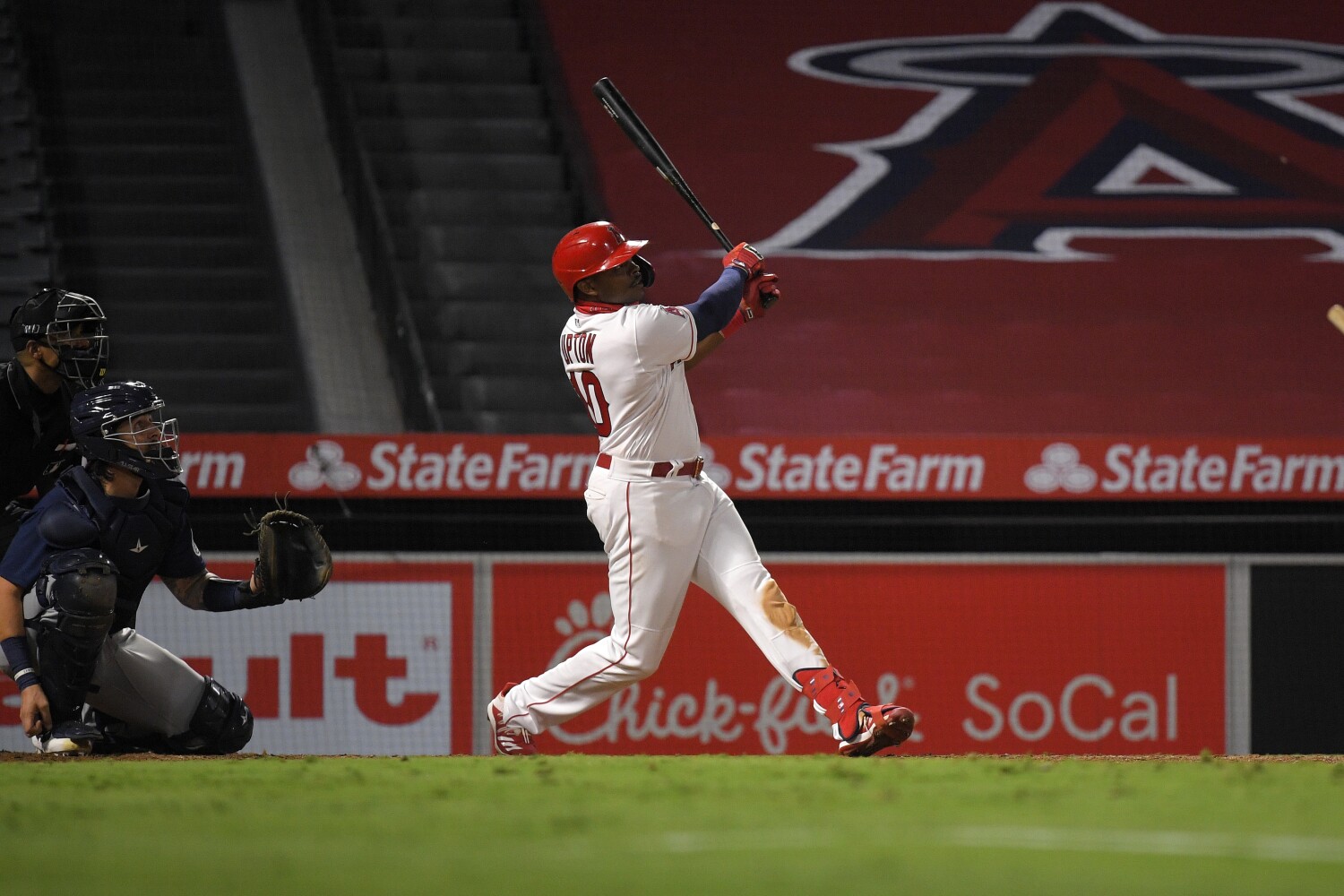 Baseball’s 3½-month shutdown worked in Griffin Canning’s favor, giving the Angels right-hander time to recover from an elbow injury that would have sidelined him for two months had a 162-game season started in late March.

Two turns through the rotation in this pandemic-shortened 60-game season, a healthy Canning has emerged as the team’s best starting pitcher.

COVID-19 did Justin Upton no such favors. The veteran left fielder was just starting to feel good at the plate, blasting a hanging curve to deep left for his first Cactus League homer against Cleveland on March 9 when spring training was halted. That turned out to be his last exhibition at-bat until late July.

“To be honest, I was a little upset when we got shut down because at the end of spring training, against Cleveland, it finally kind of clicked for me,” Upton said on a recent videoconference call. “Some things I had been working on finally came together in that last game.”

Upton couldn’t carry that feeling into the summer. He hit .135 (five for 37) with two homers, four RBIs, 14 strikeouts and three walks in 41 plate appearances over his first 10 games.

Those struggles expedited top outfield prospect Jo Adell’s promotion to the big leagues on Tuesday and reduced Upton to a platoon role with the left-handed-hitting Brian Goodwin in left field.

Upton started at designated hitter and was in the cleanup spot for Wednesday night’s game against the Seattle Mariners in T-Mobile Park, but it will be a challenge for him to find his swing with the sporadic playing time that comes with being the right-handed-hitting part of a platoon.

“It’s not easy, and Goody been doing nice job also,” Angels manager Joe Maddon said in a videoconference call Wednesday. “I explained [the decision] to Justin, and he was fine in the sense that he was very respectful. But knowing the competitor he is, he definitely wants back in.

“I’m certain his opportunity will re-pop up. He’s such a professional. I totally believe he will get to the point where he’ll get hot again, and we’ll be forced to put him out there. It’s just going to be a matter of time.”

Upton, 32, is a four-time All-Star who has hit 300 homers, but Adell, 21, is the organization’s best prospect since Mike Trout, “and when you bring up a player like that, you don’t want him sitting around and trying to be a bench player,” Maddon said.

Shohei Ohtani has made three starts on the mound in two years, his return from 2018 Tommy John surgery derailed by an elbow sprain that will relegate him to hitting for the rest of this season, but he is not ready to abandon his goal of being a two-way player in the major leagues.

“This time it’s not as severe as when I needed Tommy John; it’s just a little inflammation in my elbow, so I’m still going to try to get back on the mound,” Ohtani said through an interpreter Wednesday.

“If it comes down to [the Angels] telling me to just focus on hitting or just focus on pitching I will listen, but ideally, I would like to leave the window open for me to do both.”

Ohtani gave up seven earned runs and walked eight of 16 batters in 1 2/3 innings of two starts against Oakland and Houston. His fastball velocity dropped from a high of 97 mph to 89-90 mph at the end of a 42-pitch second inning on Sunday.

An MRI test revealed a Grade 1-2 sprain of the flexor pronator mass in his right arm, but Ohtani told Japanese reporters he will not need surgery. He said he could not pinpoint a specific pitch on which he hurt the elbow.

Did Ohtani feel any pain in his elbow during the lengthy second inning Sunday?

“I’m not sure if it was pain,” he said. “I always felt tightness through the whole rehab program. I think it’s natural that as I increase my velocity and intensity, I’m going to feel the soreness. It’s just hard to differentiate the tightness, soreness and pain.”

Andrelton Simmons (left-ankle sprain) is eligible to come off the 10-day injured list Friday, but Maddon said the shortstop is “still pretty sore” and will not return “in the real immediate future.”