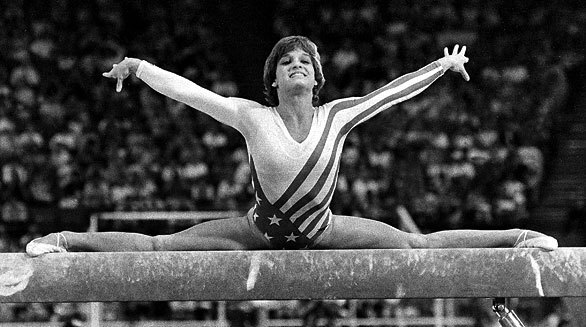 Mary Lou Retton, needing perfect scores, fought back in her final two events to beat Romania’s Ecaterina Szabo by five one-hundredths of a point and Romania’s Simona Pauca by five-tenths on this date in 1984 and won the women’s all-round gymnastics title at Pauley Pavilion in the Los Angeles Olympic Games.

For Retton, the gold medal that came with her championship was the first won by a U.S. women’s gymnast.

The 4-foot-9, 84-pound 16-year old from Fairmont, W.Va, trailed Szabo by 0.15 of a point with two events to go, She scored a 10 in the floor exercise with difficult moves that included a double back somersault and another 10 in the vault that sent the crowd of 9,023 into a wild celebration.

Other memorable games and outstanding individual performances on this date.

1948 — Forty-two-year-old Satchel Paige made his first major league start with the Cleveland Indians before a crowd of 70,000 at Municipal Stadium and pitched seven innings in a 5-3 victory over the Washington Senators. Paige, who had pitched in the Negro Leagues since the 1920s, was signed a month earlier by Indians owner Bill Veeck. He became the first player from the Negro Leagues to pitch in the World Series when the Indians met the Boston Braves that fall.

1949 — The National Basketball Assn. was formed with the merger of the National Basketball League (NBL) and the Basketball Assn. of America (BAA). Maurice Podoloff, the head of the BAA, was elected commissioner of the new league. NBL teams, which included the Boston Celtics, the Minneapolis Lakers, the New York Knickerbockers, the Philadelphia Warriors and the Rochester Royals, joined the BAA teams, plus an expansion team in Indianapolis.

1955 — Trotter Scott Frost, trained and driven by Joe O’Brien, won the Hambletonian at Good Time Park in Goshen, N.Y., when he edged Galophone by a head, after Galophone, driven by Billy Haugton, had taken a slight lead with 50 feet to go. Scott Frost would go on to win trotting’s Triple Crown when he took first place in the Yonkers Trot and the Kentucky Futurity.

1959 — The second of two All-Star games that year was played, and the American League won 5-3 at the Coliseum. Yogi Berra, Rocky Colavito and Frank Malzone hit home runs for the AL. Nellie Fox of the Chicago White Sox singled in the deciding run in the seventh inning. The teams were managed by Casey Stengel and Fred Haney, and the Dodgers’ Don Drysdale was the starter for the National League. The first All-Star game was played July 7 at Forbes Field in Pittsburgh, and the NL won 5-4.

1969 — Pinch-hitter Rich Reese hit a grand slam in the seventh inning that powered the Minnesota Twins to a 5-2 win over the visiting Baltimore Orioles, ending pitcher Dave McNally’s 15-game winning streak. Reese connected on a 3-2 pitch from the left-handed McNally, who started the game with a 15-0 record. It was the first of three career pinch-hit grand slams for Reese, and McNally would go on to finish the season 20-7.

1990 — The PGA Tour announced it will not hold tournaments at golf balls that have all-white memberships or show any other signs of discrimination. The statement came after a week of controversy concerning the PGA Championship, which was to be played at the previously all-white Shoal Creek Country Club near Birmingham, Ala. Bowing to pressure from civil rights groups and planned demonstrations, Shoal Creek awarded honorary membership to a Black businessman and said it was considering another Black for admission.

1997 — Colleen Walker, 40, won the du Maurier Classic by two strokes over Liselotte Neumann of Sweden when she shot an eight-under-par 65 in final round at Glen Abbey Golf Club in Oakville, Canada. It was the second-lowest score recorded in the final round of an LPGA major, after a nine-under 64 by JoAnne Carner in the 1978 du Maurier.

2006 — Champ Car driver Cristiano da Matta of Brazil needed surgery to remove a ruptured blood vessel on the surface of his brain after his race car collided with a deer that had wandered onto the track during a test session at Road America near Elkhart Lake, Wis. The open-wheel car’s right front tire struck the deer on an uphill run to the blind left-hand Turn 6, and it then flew back, hitting De Matta in the driver’s seat. De Matta’s recovery took more than two years, and he returned to driving in September 2008.

2013 — Katie Ledecky, 16, wrapped up a brilliant performance at the world swimming championships in Barcelona, Spain, when she won her fourth gold medal and set a second world record. Ledecky powered her way in final four laps of the 800-meter freestyle to win in 8 minutes 13.86 seconds, breaking the record of 8:14.10 set by Britain’s Rebecca Adlington at the Beijing Olympics in 2008.

How many positive COVID-19 tests before sports cease again?

Corey Seager to face his brother, Kyle, for the first time