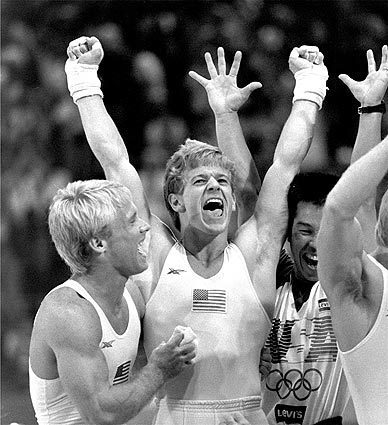 The U.S. men’s gymnastics team touched off a wildly emotional celebration at Pauley Pavilion on this date in 1984 when it stunned China in the Summer Olympics by winning the team title — the men’s first gold medal in the sport in 80 years.

Mitch Gaylord of Van Nuys, Bart Conner of Morton Grove, Ill., and Tim Daggett of West Springfield, Mass., all got perfect 10s in, respectively, the rings, parallel bars and the high bar. UCLA’s Peter Vidmar was the high scorer.

The United States outpointed China 591.40 to 590.80, and Japan finished third at 586.70. Although China was heavily favored, the Americans built up confidence in the compulsory exercises, and it carried over to the optionals round.

“It has to be the biggest moment for all of us,” Conner said. “Now we’ve proved we’re at the level of China and Russia. Nobody is going to blow us away.”

Other memorable games and outstanding sports performances on July 31 through the years:

1934 — Led by Fred Perry and Bunny Austin, Great Britain beat the United States 4-1 on Centre Court at Wimbledon’s All-England Club in the finals of the Davis Cup. Perry defeated Sidney Wood 6-3 and Austin stopped Frank Shields 6-1 in the final matches.

1954 — First baseman Joe Adcock went five for five, hitting four home runs and a double that propelled the Milwaukee Braves to a 15-7 win over the Dodgers at Ebbets Field in Brooklyn. Adcock set a major league record of 18 total bases that stood for 48 years until it was broken in 2002 by Shawn Green of the Dodgers in a game at Milwaukee. Adcock homered off Don Newcombe in the second inning, Erv Palica in the fifth, Pete Wojey in the seventh and Johnny Podres in the ninth inning.

1983 — Jan Stephenson nearly wilted in temperatures over 100 degrees but overcame the heat and beat JoAnne Carner and Patty Sheehan by a stroke to win the U.S. Women’s Open at Cedar Ridge Country Club in Broken Arrow, Okla. Stephenson, 31, from Australia, fired a final round three-over-par 74 for a 72-hole total six-over 290, the highest winning score in an Open in six years. She is the first foreign golfer to win the women’s Open since France’s Catherine Lacoste, an amateur, did it in 1967.

1984 — Alex Spanos, a real estate and construction magnate from Stockton, took control of the San Diego Chargers when he announced that he had matched another real estate developer’s bid to purchase the majority ownership of the team that was controlled by Gene Klein. As one of the Chargers’ minority owners, Spanos had a right of first refusal on any sale of Klein’s controlling shares. He matched an offer of $40 million to $41 million that Dallas apartment developer Carl Summers Jr. had officially submitted to Klein over a month earlier.

1993 — Mike Aulby became the second bowler in the Professional Bowlers Assn. history to roll a perfect 300 in the title game of a tournament when he beat David Ozio in the $140,000 Wichita Open at Wichita, Kan. Aulby topped Ozio of Vidor, Texas, 300-279 for his second championship of the year and 22nd of his career. It was the highest-scoring televised match at the time.

2007 — In a blockbuster move, Kevin Garnett was traded from the Minnesota Timberwolves to the Boston Celtics for five players and high draft choices. The Celtics obtained the former NBA most valuable player and 10-time All-Star for forwards Al Jefferson, Ryan Gomes and Gerald Green, guard Sebastian Telfair and center Theo Ratliff and two first-round picks. Garnett had played for the Timberwolves for 12 seasons, and was set to join a Celtics team that included Paul Pierce and Ray Allen.

2011 — Yani Tseng won the Women’s British Open for the second straight year when she beat Brittany Lang by four strokes at Carnoustie Golf Club in Scotland. The victory made Tseng the youngest woman to win five major tournaments. The 22-year-old from Taiwan shot a three-under-par 69 to finish at 16-under-par 272 after she had trailed Germany’s Caroline Masson by two shots when the final round started.

2012 — Michael Phelps became the most decorated Olympic athlete of all time when broke the record for most medals after the United States swam to gold in the 800-meter freestyle relay at the Summer Games in London. With 19 career medals spanning three Olympics, Phelps moved ahead of gymnast Larisa Latynina, who collected 18 while competing for the Soviet Union in the 1956, 1960 and 1964 Olympics.

Middlebury-bound Riley Griffis can hang in the deep end