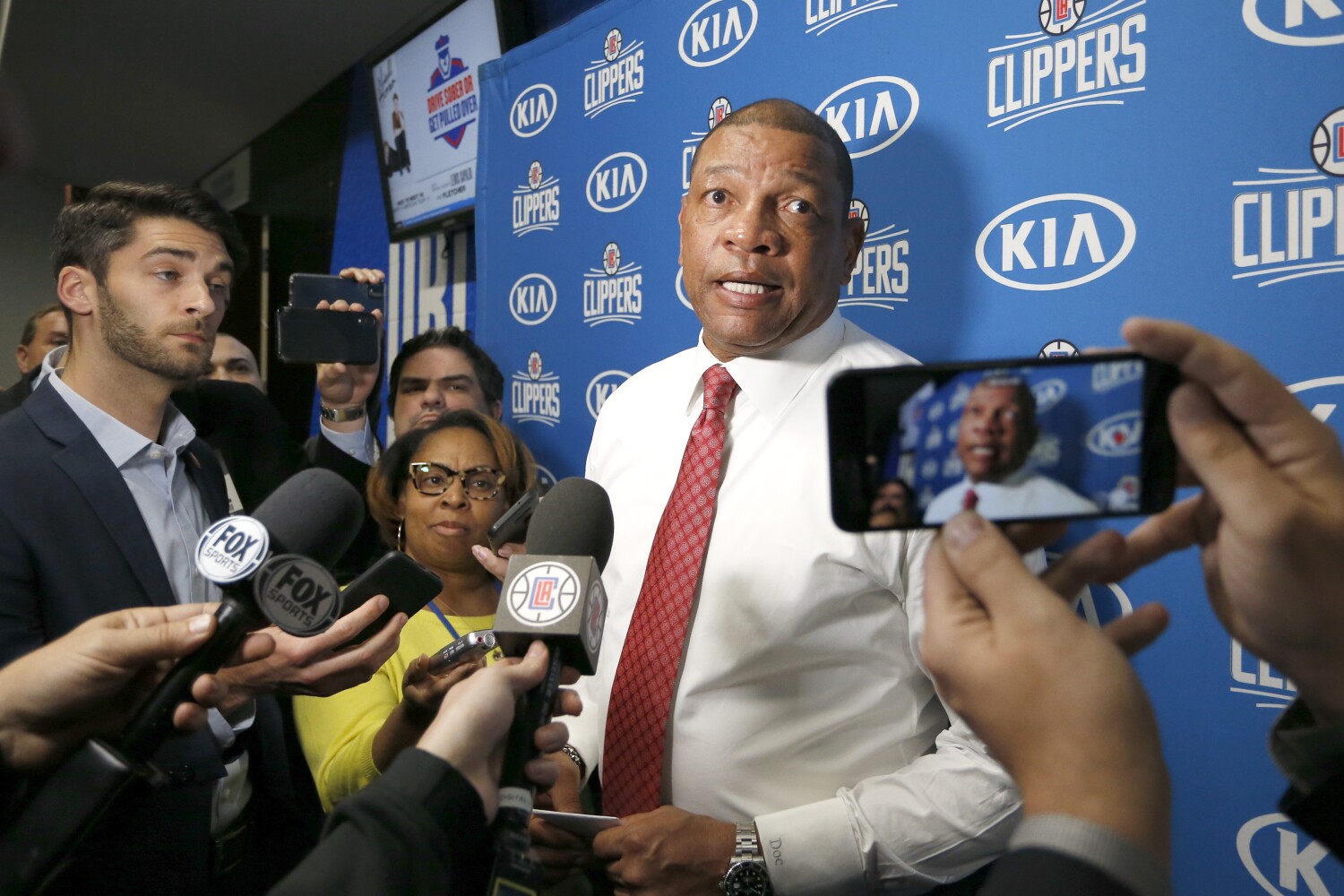 Doc Rivers sat down for his video conference call with reporters on Wednesday and stayed on his social justice message. The Clippers coach wore a blue baseball cap with the word “VOTE” in capital letters.

He was asked about President Trump’s critical comments that NBA players were “disgraceful” for kneeling during the national anthem before games. Trump said Wednesday during the “Fox & Friends” show that when he saw people kneeling and “disrespecting our flag and national anthem” that “what I do personally is turn off the game.”

“Well,” said Rivers, laughing, “we lost one guy. Like, really, I don’t even care. We know that justice is on our side, right?

“And this hat that I’m wearing is what our president is trying to get us to not do, which I think is just as disgraceful.”

Rivers was referring to a tweet in which Trump said mail-in voting for the 2020 presidential election would mean “the most INACCURATE & FRADULENT election in history” and that the United States should “Delay the Election until people can properly, securely and safely vote???”

Rivers has been an advocate for voting, wearing get-out-the-vote hats and speaking out about that issue during the NBA’s restart to the season on the ESPN Wide World of Sports Complex near Orlando.

Rivers, like numerous players and coaches in the NBA, has made a conscious decision to keep the Black Lives Matter movement at the forefront while finishing the season.

“Oh, my gosh, it’s vital,” Rivers said about voting during the recent media session. “First of all, it’s our right. And the fact that there’s so much voter suppression going on with Blacks and Latinos, and really young people, tells you how important voting is. And so, I’m not going to tell you who to vote for. I have my opinion, as you all know. But I just urge everyone to vote, exercise that right. We have fought so hard.”

On “Fox & Friends,” Trump further remarked that “the ratings for the basketball are way down” for the NBA games.

According to Sports Media Watch, though, the NBA’s restart to its season averaged 1.86 million viewers on TNT, ESPN and ABC through Monday night’s games, which was up 14% from all three networks’ averages before the league halted play in March because of the coronavirus outbreak.

When TNT showed the game between the Lakers and Clippers on opening night of the restart last week, the network more than doubled its average viewership for a regular-season telecast, making it the eighth-most-watched game of the season so far.

Clippers center Ivica Zubac, who joined Rivers during the media session, said he felt it was only right to support his teammates and NBA brethren — the majority of whom are Black — in their quest for social justice.

That’s why Zubac, who is from Croatia, chose to wear “Enough” on the back of his jersey.

“About the message on my jersey, I’m grateful I got a chance to express to my teammates and to the African American community choosing ‘Enough,’” Zubac said. “I think it’s enough of all this happening to the African American community. After so many years, it’s time that everyone should get equal opportunity and there shouldn’t be … one side shouldn’t get more opportunities than the other one. It’s just everyone should be equal. It’s enough of the killings that are happening and police brutality and all that stuff.”

Update: Starting guard Patrick Beverley will miss the game because of a left calf strain, the Clippers reported. The team gave no timetable for his return to play. If the Western Conference playoffs were to start today, the second-place Clippers would meet the seventh-place Mavericks in the first round. The Clippers have defeated the Mavericks twice this season. Dallas’ Luka Doncic is fifth in the league per game in scoring (29.0) and third in assists (8.8).

Two-out runs are a problem for Angels’ pitching staff

Kings and Ducks are done; Staples Center may host playoffs