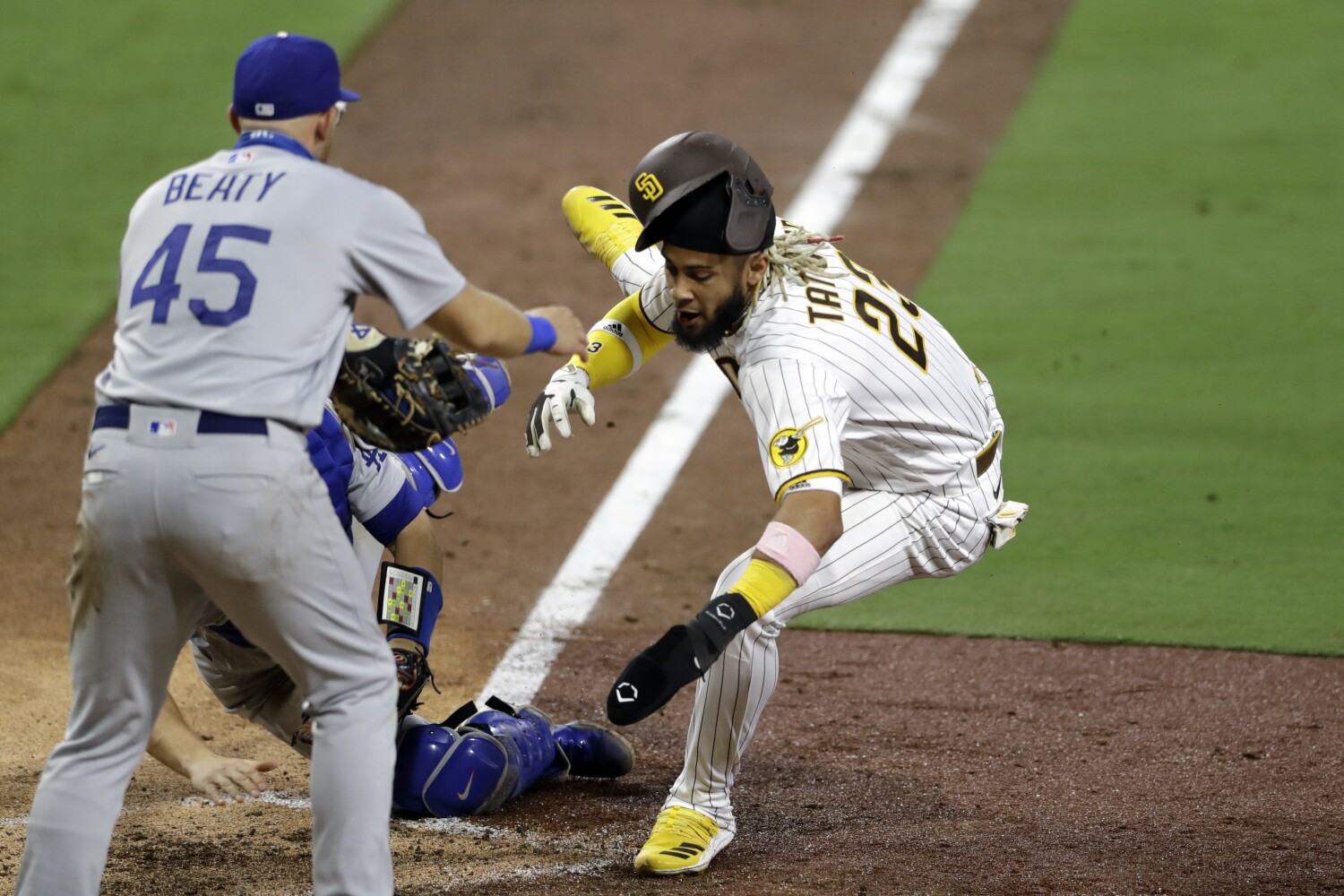 The Dodgers arrived here for the final leg of their longest road trip of this short, strange season to encounter the club thirsting to dethrone them in the National League West.

For years, the San Diego Padres have been touted as a future contender. They’ve piled up prospects, whiffed on huge trades and signings, nailed others, and constructed a team deemed ready to make noise in 2020. They believe that future is, finally, now.

Monday’s series opener offered a marquee pitching matchup between two brash and budding aces. Walker Buehler took the mound for the Dodgers. Chris Paddack was on the other side. In the end, with the Dodgers without an injured Mookie Betts, the bullpens were the difference in the Dodgers’ 5-4 loss at Petco Park.

With the score tied at three, the Padres (7-4) scored two go-ahead runs in the sixth inning off relievers Brusdar Graterol and Caleb Ferguson. Graterol was charged with both runs in his two-thirds of an inning.

Cody Bellinger slugged his second home run in two games in the ninth inning against Padres closer Kirby Yates, but Yates struck out the next three batters to secure the save.

The Dodgers’ lineup Wednesday didn’t include Betts for the first time this season. The star right fielder was absent after leaving Sunday’s game against the Arizona Diamondbacks with an injured left middle finger.

Dodgers manager Dave Roberts confirmed Betts hurt the finger during his final at-bat Sunday. He concluded the plate appearance with his second home run and played defense for two more innings before he was replaced in the seventh.

Roberts said tests on the finger were negative but the swelling was still “substantial” Monday. In a pregame interview with the Dodgers’ radio network, Betts said he hadn’t tried swinging a bat since hitting the home run.

Without Betts, the Dodgers (7-4) opted for a retro look: placing Joc Pederson in the leadoff spot against right-hander Chris Paddack. Pederson was the club’s leadoff hitter against right-handed starting pitchers last year and offered an immediate slugging threat. His nine leadoff homers led the National League.

It took one pitch to start the count this season. Pederson crushed Paddack’s first offering — a 95-mph fastball over the outer half of the plate — over the left-center-field wall. It was his first home run of the season and his 21st career leadoff shot.

The blast gave Buehler a cushion before he stepped on the mound a year to the day after annihilating the Padres at Dodger Stadium. The right-hander allowed a run, compiled 15 strikeouts and walked none in a complete-game win that night. Fans were in attendance. The Dodgers were cruising to another division title. The Padres were failing to live up to the hype again.

Recording all 27 outs wasn’t a possibility for Buehler on Monday. Before the game, Roberts said Buehler would top out at five innings or around 75 pitches, whichever came first, after not building up to his standard stamina in time for the season.

Buehler lasted 3 2/3 innings in his first outing against the Houston Astros last week. He went five innings Monday and gave up three runs — all on solo home runs. He walked three, struck out three and threw 79 pitches.

Each of the Padres’ three home runs off Buehler came on secondary pitches. Trent Grishman clubbed a cutter in the first inning, Wil Myers connected on a slider in the fourth and Fernando Tatis Jr. whacked a first-pitch curveball in the fifth. Those were the only hits Buehler allowed.