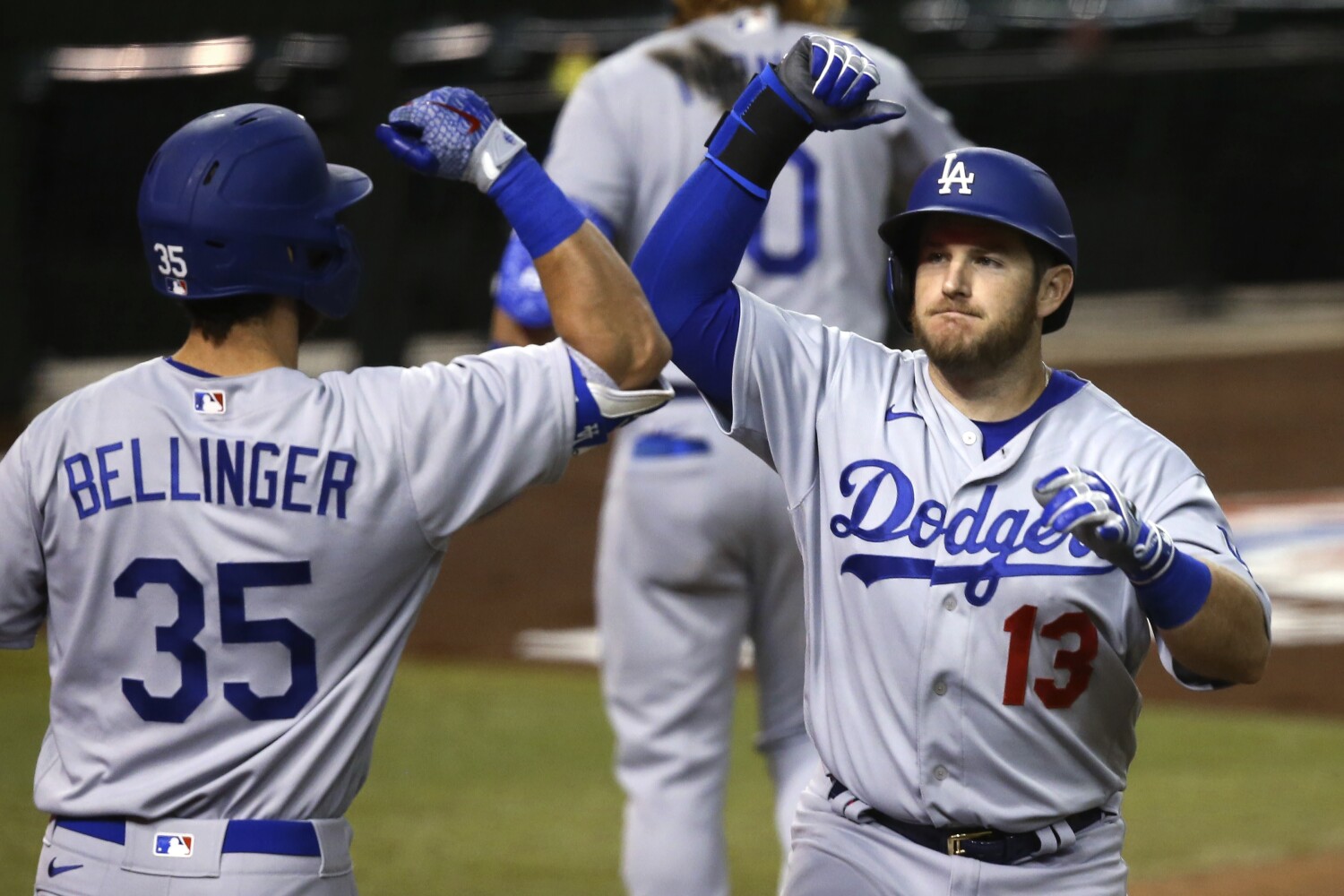 After popping out to the catcher in the second inning Thursday, Max Muncy dropped his head and raised his voice, blurting an expletive that echoed through an empty Chase Field.

Four innings later, the first baseman rounded the diamond quietly and confident, the ambient piped-in crowd noise being lowered to a murmur after his solo home run cleared the deepest part of the park in left-center field.

Muncy’s dueling reactions embodied the early-season state of this Dodgers team, one that keeps strolling along — they picked up their third straight victory with a 6-3 win over the Arizona Diamondbacks on Thursday — even as they search for the best version of themselves.

In the first of a four-game series against the Diamondbacks (2-5), the Dodgers (5-2) hit three home runs — AJ Pollock’s two-run shot in the first and Corey Seager’s solo blast in the second preceded Muncy’s third of the year in the sixth — and drew eight walks, tagging Arizona starter Robbie Ray with five runs in 4 ⅔ innings.

“Tonight was a really good night,” Dodgers manager Dave Roberts said. “Robbie Ray has given us fits at times [in the past]. He didn’t have the best command … and when he does make a mistake over the plate, AJ, Corey made him pay.”

Yet, Roberts’ club also stranded eight men on base, batted just one for seven with runners in scoring position and didn’t receive a hit from reigning MVP Cody Bellinger, who is five for31 for the season.

Mookie Betts, the other former MVP in the lineup, made two key plays on the basepaths — going from first to third to later score on a sacrifice fly in the first inning, then reaching second on a routine liner an inning later. He’s batting .206 after going one for four at the plate.

“That’s the nice thing about having length to your lineup,” Roberts said. “Cody and Mookie haven’t gotten on track yet and you can still be up there and lead the league as far as team runs scored. We’re still being productive. But certainly having those two guys, get those guys going, it’s going to be a lot of fun.”

The manager has received similar encouragement from his pitching staff.

Starter Ross Stripling battled against a disciplined Diamondbacks lineup that ran up his pitch count — in the third at-bat of the game, Starling Marte saw 14 pitches before finally flying out — and whiffed at only five of his 86 throws.

Highlights from the Dodgers’ 6-3 win over the Arizona Diamondbacks on Thursday.

“That’s just these guys, there’s not a ton of swing-and-miss in this lineup,” said Stripling, who is still the only Dodgers starter to work into the sixth inning of a game this season. “They don’t punch out a lot. I’ve faced them a lot over the years, so they have a good idea of what’s coming. Definitely was trying to pump strikes. I wasn’t super sharp location-wise. But I felt my stuff was good.”

After Stripling’s exit, Roberts once again leaned on a bullpen that has been the team’s biggest early-season surprise. Even with closer Kenley Jansen and high-leverage reliever Blake Treinen getting the night off after consecutive appearances against Houston this week, Adam Kolarek, Joe Kelly (who was eligible because his eight-game suspension is still under appeal), Brusdar Graterol and Pedro Baez combined for 3⅔ scoreless innings, with Baez collecting the save in a stress-free ninth inning.

“We’ve really pitched well,” Roberts said when asked to evaluate the season’s first week. “That’s probably the thing I’m most pleased with. The starting pitching. The ’pen has really stood out.”

With the season already more than 10% complete, Thursday’s win moved the Dodgers into a tie for first place in the NL West. And after seven games, the fact they still don’t appear to be all the way in top gear, that there remains loftier levels to which they can aspire, is proving to be a source of optimism, not frustration.

“In the exhibition games, we were just hammering balls and then you get to the season and sometimes it’s just a little adjustment,” said Pollock, who also doubled Thursday to up his on-base-plus-slugging to a team-best 1.350, before the game. “I don’t think anyone would say that we’ve been firing on all cylinders yet … But we’ve got a dangerous lineup. I think everyone feels really good about things.”

Five takeaways from the Lakers’ Game 3 win over the Rockets