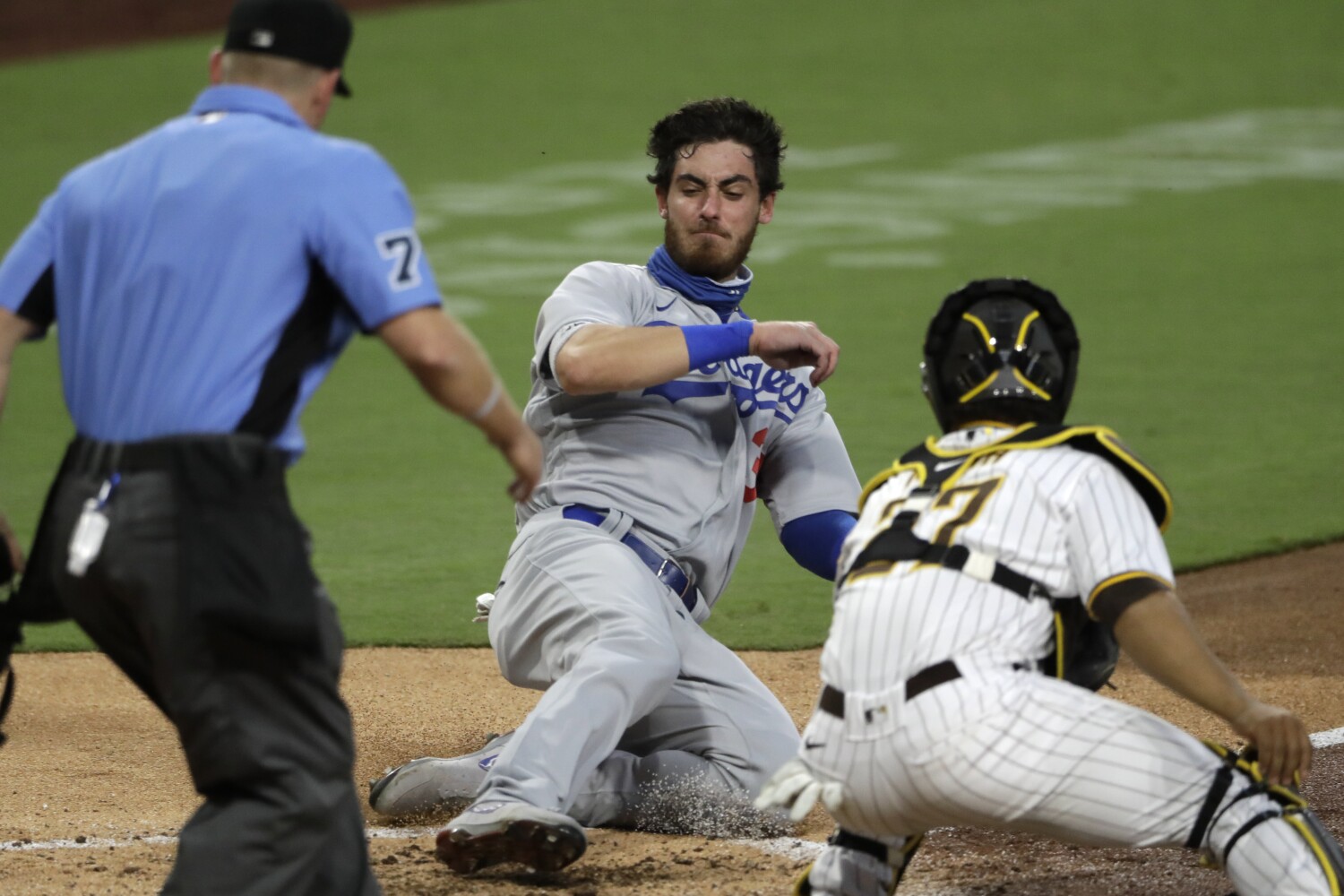 The Dodgers entered the sixth inning Tuesday without a hit. By the end of the seventh, they had overturned a two-run deficit.

Behind a two-run single from Corey Seager and two RBIs from AJ Pollock — the team’s hottest hitters coming through in the clutch again — the Dodgers evened their series against the upstart San Diego Padres with a 5-2 win at Petco Park to force a rubber match in the finale on Wednesday.

For a while, it looked like the Dodgers might waste Dustin May’s best start yet this year. With an electric sinker-cutter mix, the rookie right-hander allowed only two runs and three hits over six innings while striking out eight, a new career high.

However, the Padres’ own hard-throwing right-hander, Dinelson Lamet, was a notch better early in the night. Even without perfect slider command, the 28-year-old needed just 46 pitches to record his first 14 outs and had a no-hitter with two outs in the sixth.

But then Lamet gave the Dodgers an opening, plunking Justin Turner on the arm with a first-pitch sinker to make Turner the club’s all-time leader in being hit by pitches. Cody Bellinger broke up the no-no after that, squibbing a single through the middle of the infield.

That brought the streaking Seager, serving as the designated hitter for the second straight night with a sore left quadriceps, to the plate for a nine-pitch at-bat. In a 1-and-2 hole, he fouled off a slider. On 2-and-2, he laid off another breaking ball to work the count full.

After one more foul, Seager squared up a low sinker, lifting it over shortstop Fernando Tatis Jr.’s head and into left-center field. Turner scored easily and Bellinger was waved around third after center fielder Trent Grisham bobbled the ball. A relay throw arrived home in time, but catcher Francisco Mejía dropped the ball on the tag, Bellinger tying the game.

Pollock, pinch-hitting for Joc Pederson with a runner on second and two outs in the seventh, engaged reliever Tim Hill in a similar battle. After a pair of generous strikes on the outside corner, Hill missed with one two-strike fastball and watched Pollock foul off another.

With the count full, the left-hander tried dropping another sinker over the outside of the plate. This time Pollock was on it, poking it the other way into the right-field corner to put the Dodgers in front.

Chris Taylor, who subbed into the game earlier after Edwin Ríos was hit by a pitch in the foot, added to the lead in the eighth with an RBI single. Then Pollock extended the advantage again with a solo blast to lead off the ninth, lifting his third homer to center to raise batting average to a team-best .364. Seager is right behind him, hitting .356.

On the mound, Dodgers relievers Pedro Báez, Blake Treinen and Kenley Jansen made the lead stand up. May earned credit for his first win of the season. Jansen picked up his third save.

Even with Charles Barkley talking trash, Tom Brady is clutch