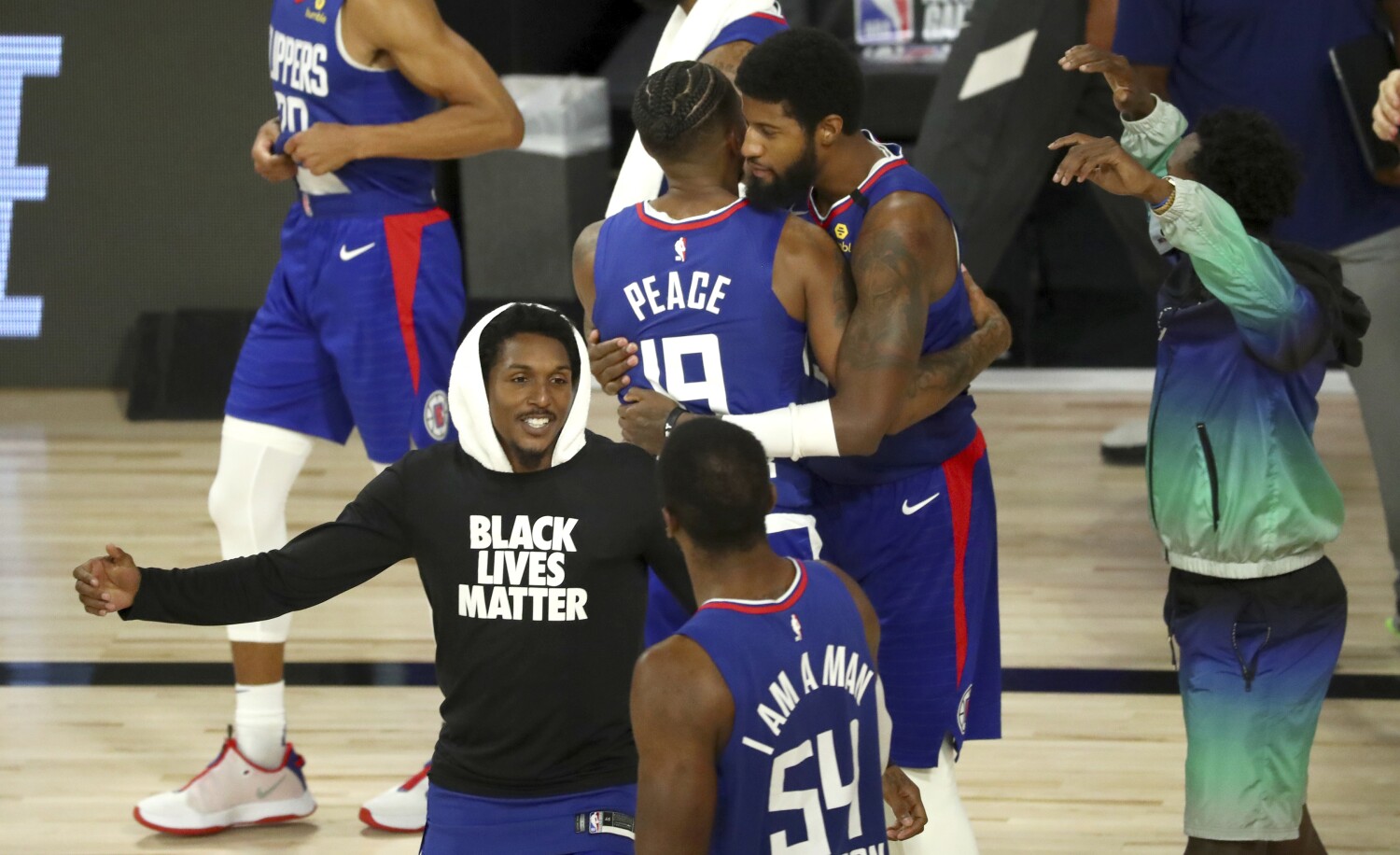 More than 90 minutes before tipoff Saturday, the game operations staff began rehearsing for what was a designated home game for Portland. They turned the video boards ringing the court red with a Trail Blazers graphics package. They announced the starters.

The dry run also included a test of prerecorded audio that rang through the speakers inside HP Field House.

Had game operations seen the day’s updated injury report too?

Considering Kawhi Leonard didn’t play because of injury management of a sore left knee, Patrick Beverley was out too because of a sore left calf, and Paul George was removed from a three-point game with five minutes left in the fourth quarter because, as coach Doc Rivers put it, he had reached his minutes limit, it appeared likely that rehearsal would become reality.

The “Blazers win” drop never was heard from again, however. Not after a late surge by Clippers reserves, coupled with breakdowns by Portland’s starters, resulted in a 122-117 Clippers victory.

Here are five observations from the game:

1. The shock of the Clippers’ late comeback, which was completed with four reserves facing four Trail Blazers starters, wasn’t only that it happened but also that Rodney McGruder provided the go-ahead basket. McGruder’s highest value has been his perimeter defense and he’s struggled to gain a foothold within the bench rotation while enduring the worst-shooting season of his four-year career.

Seeking any sort of fix for his 39% field-goal shooting and 27% three-point shooting, McGruder hired shooting coach Chris Matthews during the NBA’s four-month hiatus and the two trained together for three weeks. They continued to talk once McGruder arrived in Orlando, as well, with what McGruder called positive results.

“I have seen a lot of progress from it, just little teaching habits,” McGruder said last month. “He just rewired the way that I learned how to shoot the ball. That was very beneficial.”

His reward for that work was knocking down a three-pointer with 26 seconds remaining for a 118-117 Clippers lead.

2. One of coach Doc Rivers’ critiques following Thursday’s victory was that the Clippers hadn’t kept track of Dallas’ shooters as often as they should. Those miscues helped the Mavericks made 17 three-pointers, one game after Phoenix made 17 from deep, as well. Saturday’s performance didn’t indicate the Clippers fully learned their lesson. Portland made 17 threes, shooting 39% from deep, and both Gary Trent Jr. and CJ McCollum made six apiece. Losing Trent was particularly surprising, given that his name was all over the scouting report after making 22 of 35 threes in his four previous games in Orlando.

For Rivers and assistant coach Rex Kalamian, the team’s defensive coordinator, the silver lining is that the returns of Leonard and Beverley will help patch the perimeter defense.

3. One of the highlights of a free-flowing first quarter was the offensive fireworks of Lou Williams and Damian Lillard, who scored 12 points apiece in the quarter. The Clipper made all five shots he took. The Trail Blazer scored six points in the paint on slashing drives while also splashing a three-pointer from each wing.

If that start suggested a high-scoring duel was coming, it never materialized. Williams missed his next four shots and never reached the free-throw line, marking the first time since Dec. 19 against Houston — and only the third time this season — that Williams failed to score in the second half.

Lillard scored 10 points after the first quarter but only six after halftime, a victory for the Clippers’ at-times scrambling defense. Consider that during Lillard’s four previous seeding games, he’d scored an average of 19.5 points after halftime.

4. Shooting guard Landry Shamet shifted into the starting lineup because of Leonard’s absence and produced his highest-scoring game since Feb. 13 with 19 points. Shamet made three three-pointers, as many as he’d made in his previous four games combined, providing a floor-spacing complement to fellow reserve JaMychal Green, who has made 60% of his catch-and-shoot threes during the restart.

Shamet has made six of 24 three-pointers during seeding games. When Shamet’s shots weren’t falling Saturday, he didn’t settle for more. He slashed instead, creating six points at the rim. It was reminiscent of the way Shamet tried to create rhythm for himself Thursday by driving into Dallas’ 7-foot-2 Kristaps Porzingis and finishing with a layup.

“Doc got on me at halftime, told me to get going, it’s time to get going, play your game,” Shamet said. “I just wanted to leave my thumbprint on it and play the best I could.”

5. Beverley’s antics late in the fourth quarter following Lillard’s missed free throws with 18 seconds left led to much of the back-and-forth sniping that dominated the teams’ postgame comments.

“Pat is just loud all the time,” Rivers said. “He was great.”

In truth, Beverley’s most notable contribution likely occurred more than an hour before tipoff, when he took a step forward in his recovery from a sore left calf by participating in shooting drills and length-of-the-court sprints. Beverley injured himself in Tuesday’s loss against Phoenix and did not participate in pregame warmups Thursday.

Rivers has cautioned that the Clippers will be “very cautious” in managing Beverley’s return. The Clippers have three seeding games remaining before the first round of the postseason begins Aug. 17.

Too late for Billy Eppler? Angels GM is on thin ice

Governing Bodies Should Have Been Worried A Long Time Ago

Tiger Woods On Distance: Governing Bodies Should Have Been Worried A Long Time Ago When Tiger Woods burst onto the