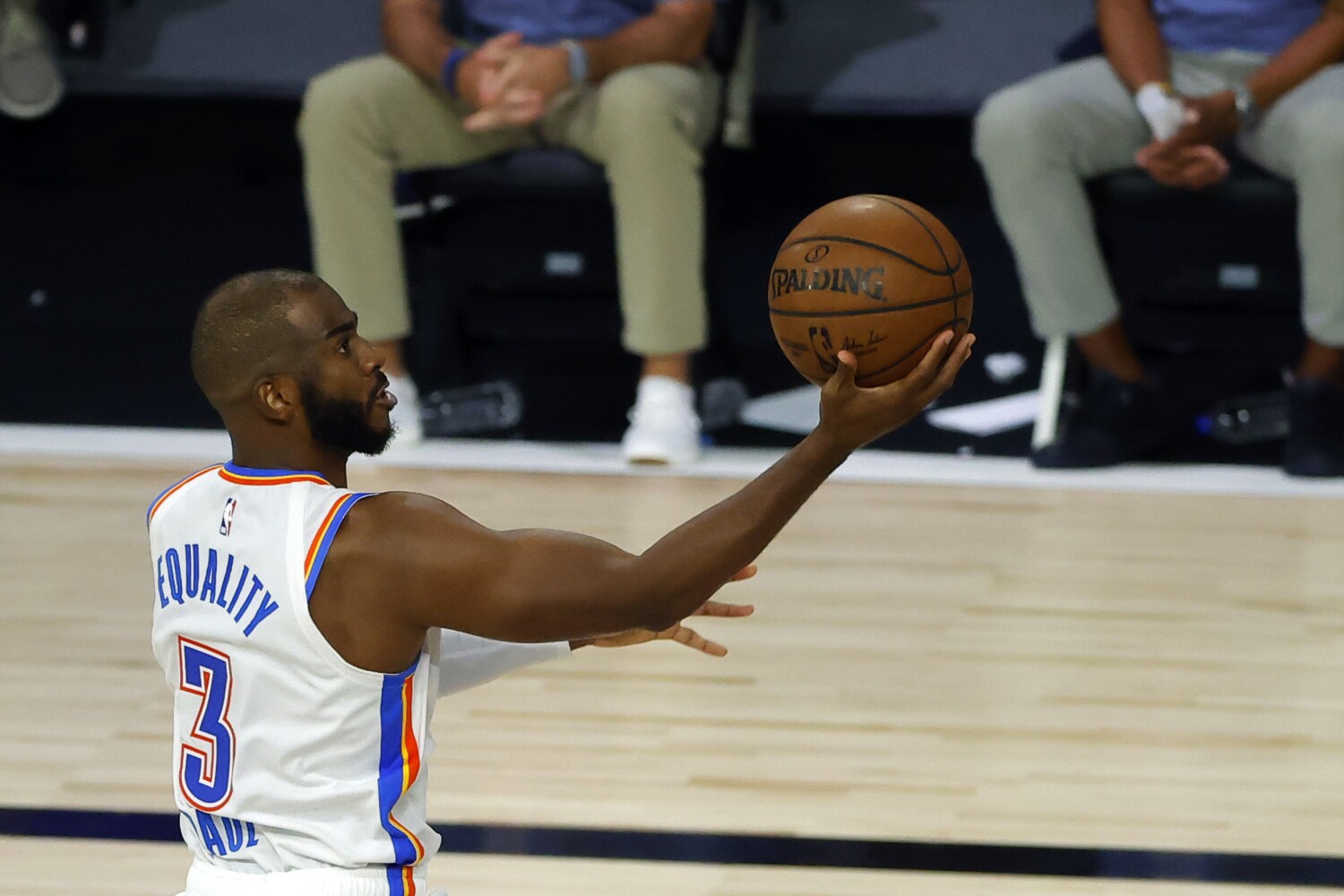 It’s even more automatic than the right elbow jumper that Chris Paul has made over defenders in more than 1,000 NBA games. Give Paul a slight — even one smaller than the window he needs to take that signature shot — and he’ll hang on to it forever.

It’s hard to fault the algorithm at ESPN that figured the Thunder didn’t have much of a shot (0.2%) to make the playoffs. They had traded their two best players and sent signals throughout the league that they were more interested in rebuilding than competing.

But here they are, more than a year after dealing perennial All-Stars Paul George and Russell Westbrook in rapid succession, one of the scariest teams inside the NBA bubble in Orlando, Fla., with Paul using that mathematical algorithm slight to keep things burning — even after his team thumped the West-favorite Lakers.

Expectations are shifting. They have been for a while to anyone who has noticed. The Thunder never sold off the pieces it received in the deals for Westbrook, namely Paul and forward Danilo Gallinari. Second-year star Shai Gilgeous-Alexander, the centerpiece of the George deal, continued to blossom outside of Los Angeles. Center Steven Adams, guard Dennis Schroeder, one of the top bench players in the league, and a host of young role players kept the Thunder in the middle of the playoff race nearly all season.

There wasn’t a lot of reason to give the Thunder that much thought, though. They were a nice story — one of the NBA’s great overachievers, but they weren’t viewed by many people as a serious threat in the postseason.Under usual circumstances, that would be true, opening on the road in the playoffs against a top-tier title contender.

Now? In empty gyms at Disney World with digital fans and no home-court advantage?

“Obviously, the Lakers and the Clippers are great. Those two teams are terrific. But when you have a four-month hiatus like we all did, everybody is starting from ground zero,” Thunder coach Billy Donovan said during a videoconference. “And some teams will get more cohesive a little quicker than others. And that’s what everyone is fighting for right now. … This takes time. You can’t have four months off like this and expect teams that were really, maybe, elite at the end of February and in March to be elite right now.

“I think that’s why everybody’s really excited about the opportunity to compete. … In this situation, a lot of things could happen.”

The Thunder are 2-1 in the season’s restart, having beaten the Jazz and the Lakers with an overtime loss to Denver in between. They also won all three of their scrimmages in Orlando, helping them generate a lot of buzz from the NBA bubble.

While the Lakers, who have clinched the top seed, played like a team with little at stake, the Thunder lived up to the hype.

Paul has looked incredibly comfortable. He was in the middle of planning for the restart thanks to his role as the players’ union president, giving him one of the most powerful voices. On the court, flanked by players willing to follow, he’s once again looked like one of the NBA’s top conductors after spending two seasons deferring to James Harden in Houston.

For now, the Thunder are best viewed as a spoiler — a team dangerous enough to derail championship hopes but not good enough to author its own.

Doubt won’t be a burden they have to overcome — not with Paul keeping track, taking notes and letting it fuel his play and ignite his team.

“We’re just going to keep our head down, keep fighting,” he said humbly before shifting gears, “understand that we weren’t supposed to be here — 0.2, 0.2% chance.”

Does Trump think he can just bluff the coronavirus?