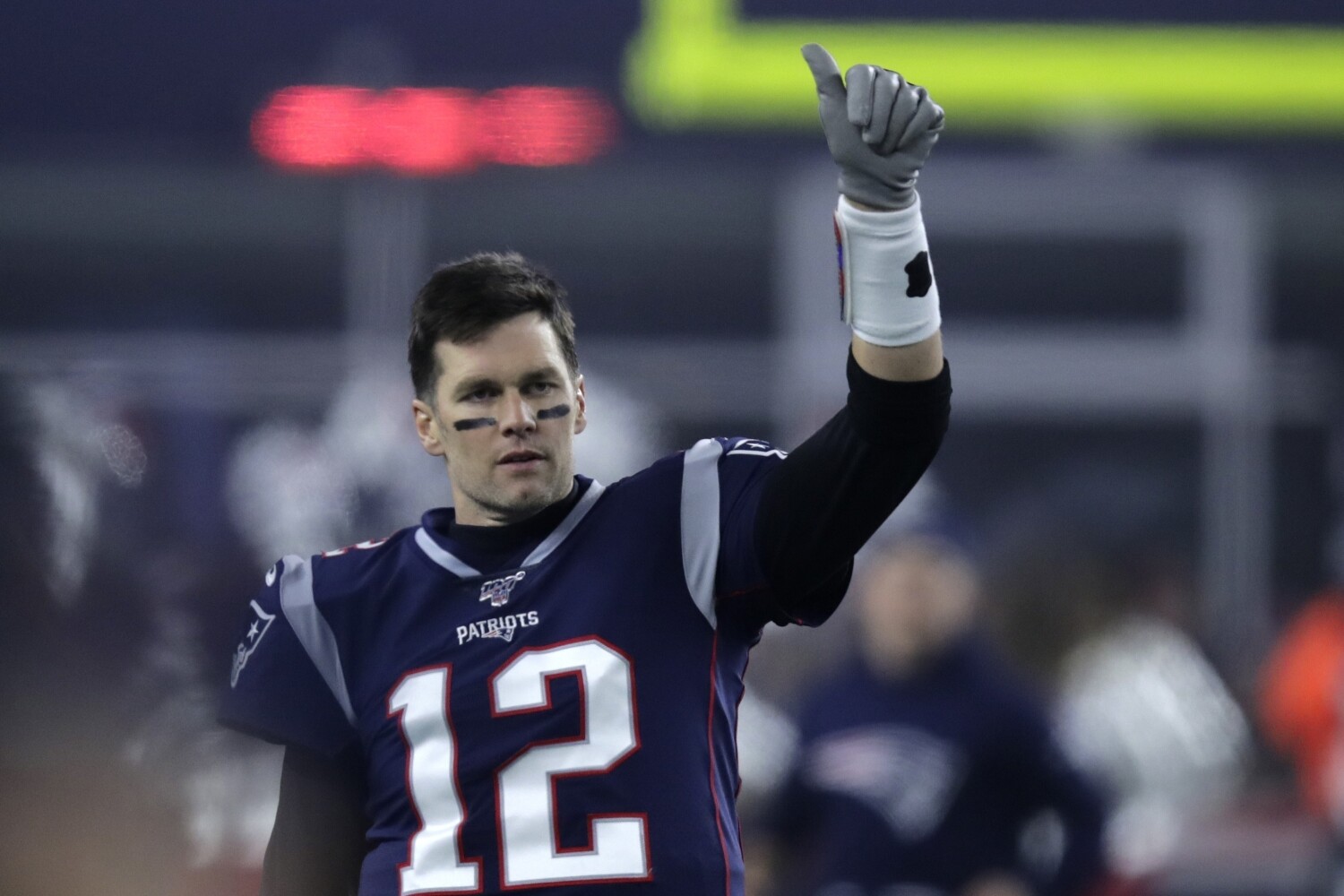 Quarterbacks can’t run as well when they get old, but they definitely don’t lose their mobility.

Just look at the approaching NFL season. Tom Brady scrambles from New England to Tampa Bay, Philip Rivers parts ways with the Chargers and winds up in Indianapolis, and Cam Newton says goodbye to the Carolina Panthers and hello to the Patriots.

Old guys rule. Or at least they’ll try to.

Brady is the biggest story of the offseason, and he turns 43 on Monday. The six-time Super Bowl winner still can command the spotlight, and has generated a buzz bigger than the Buccaneers have ever had, even when they won the Super Bowl with Jon Gruden as coach.

The word is that Brady has not lost zip on his passes. His throws not only come out on time, but are delivered with sizzling precision.

At 38, Rivers plans to play one more season — albeit a weird one amid this COVID-19 pandemic — before moving his family home to Alabama and following in the footsteps of his father as a high school football coach.

Rivers played for Colts coach Frank Reich when they were both in San Diego, and he’s got an outstanding offensive line blocking for him in Indianapolis. Even though Jacoby Brissett is still on the roster, it looks like Rivers will be the clear starter.

It’s more murky with the Patriots. Newton, who is 31 but whose body has taken a beating in recent years, will compete for the starting job with the lightly experienced Jarrett Stidham, who also played collegiately at Auburn.

Newton, a former NFL most valuable player, would give the Patriots a new look on offense, whereas Stidham learned at the elbow of Brady and the system probably wouldn’t change much.

One change in New England is unavoidable: Seven Patriots plan to opt out of the season because of the pandemic, including linebacker Dont’a Hightower, safety Patrick Chung, right tackle Marcus Cannon, and most recently, receiver Marqise Lee.

It’s a season filled with questions, and here are a few of them:

Patrick Mahomes did it, becoming a star in Kansas City in his second year, and last season leading the Chiefs to their first Super Bowl victory in half a century.

Lamar Jackson did it in Baltimore last season, earning league MVP honors after throwing for 36 touchdowns and running for seven more.

Murray, last season’s offensive rookie of the year, is the centerpiece of an Arizona Cardinals scheme that’s trending up, and just added an elite receiver in DeAndre Hopkins. The stage is set.

Which formerly non-competitive division is suddenly up for grabs?

The AFC East. Since 2003, the Patriots have won every division title but one, when they finished second to the New York Jets in 2008. But Brady is gone, and Buffalo was a more talented team even before all those Patriots started opting out. In fact, the Jets might be the second-best team in the division, and the Miami Dolphins are improved on defense and play hard for Brian Flores. It’s actually looking like an interesting division.

Who’s the comeback player of the year?

Put me down for Ben Roethlisberger, who underwent elbow surgery in Los Angeles last fall. Incidentally, it was Dr. Neal ElAttrache who repaired the joint, not only the Rams’ physician but also the doctor who rebuilt Tom Brady’s knee. Roethlisberger, 38, will return to the Pittsburgh Steelers lighter and in shape, with a decade’s worth of elbow problems surgically repaired. He’s got a healthy JuJu Smith-Schuster, Eric Ebron pairing with Vance McDonald at tight end, and a second-year receiver to watch in Diontae Johnson. Known for extending plays, Roethlisberger will extend his career too.

It’s an abysmal year to open a new stadium, and yet glistening NFL palaces are opening in Los Angeles and Las Vegas. Is there any silver lining?

First off, both SoFi and Allegiant stadiums look incredible. It’s mind-boggling to think that so few fans, if any, will see live games there this fall. But in some ways that could be a blessing for the Chargers, who have struggled to build a fan base and so far have been visitors in their own stadium. Now, they’re on a level playing field with everybody else, who at best will have a socially distanced crowd. What’s more, especially for those less-compelling matchups, the Chargers and the NFL will not have to deal with the optics of a small crowd rattling around a big new stadium.

How much does crowd noise matter?

We’ll find out this season because of a situation no one imagined. Teams like Seattle, New Orleans, and Kansas City, who boast crowds loud enough to jiggle seismometer needles, will play home games in venues that sound like libraries. That’s going to be weird.

After this year, who knows? If college football is disrupted or perhaps scrubbed this season, it’s going to be especially hard to evaluate which players belong in which rounds. It’s so often that top draft picks come out of nowhere with big seasons at the end of their college careers. That happened with the past three No. 1 picks: quarterbacks Baker Mayfield, Murray and Joe Burrow.

Burrow was widely seen as a mid-round pick. Mayfield probably would have gone earlier, in the second round or so. And Murray was a rare athlete, primarily focused on baseball, who took big strides as a quarterback in his final season. There was so much unknown about him; he just needed to play.

That might explain why Seattle was willing to give up a truckload of draft picks for a proven entity in former Jets safety Jamal Adams.

Why do this season’s hopefuls need more hope than ever?

Those late-round picks and rookie free agents are going to have a particularly tough time making rosters, because training camps will be compressed, and there are no exhibitions. That puts an inordinate amount of weight on their performance in practice — if they can get reps — and denies them the chance to put their work on tape for other teams. The upside is, practice squads have been expanded from 12 to 16 players. But if other teams are looking to poach some of those practice-squad players from opponents, they’re going to have to do so on faith, and not evidence from the preseason.

What’s the Big D stand for in Dallas?

Decisions. The biggest involves Dak Prescott. Thanks to the pandemic, the salary cap almost certainly won’t go up in the next three years. So are the Cowboys sold on their quarterback? Because they’ll be giving up a lot of buying power if they back up the Brinks truck for him. Now, Prescott might be worth it — this season will bring that picture into clearer focus — but the team might be able to get by with the far cheaper Andy Dalton and have a lot more money to spend on a supporting cast. Dalton isn’t Prescott, but he had his moments in Cincinnati.

Who are your division winners?

In the AFC, Buffalo, Pittsburgh, Indianapolis, and Kansas City. In the NFC, Philadelphia, Green Bay, Tampa Bay, and San Francisco.

Does San Diego have a team?

It does now. All those Chargers fans who felt jilted when their team bolted for Los Angeles can now root for Rivers again, with that immensely popular quarterback finishing his career with the Colts.

He remains a hero in America’s Finest City, in part because he never moved north even when his team did. He and his family stayed in their North County home, and he made the daily commute to Costa Mesa for practice. Now, he’s two-thirds of the way across the country, yet in some ways, closer to his old fans than he has been in years.