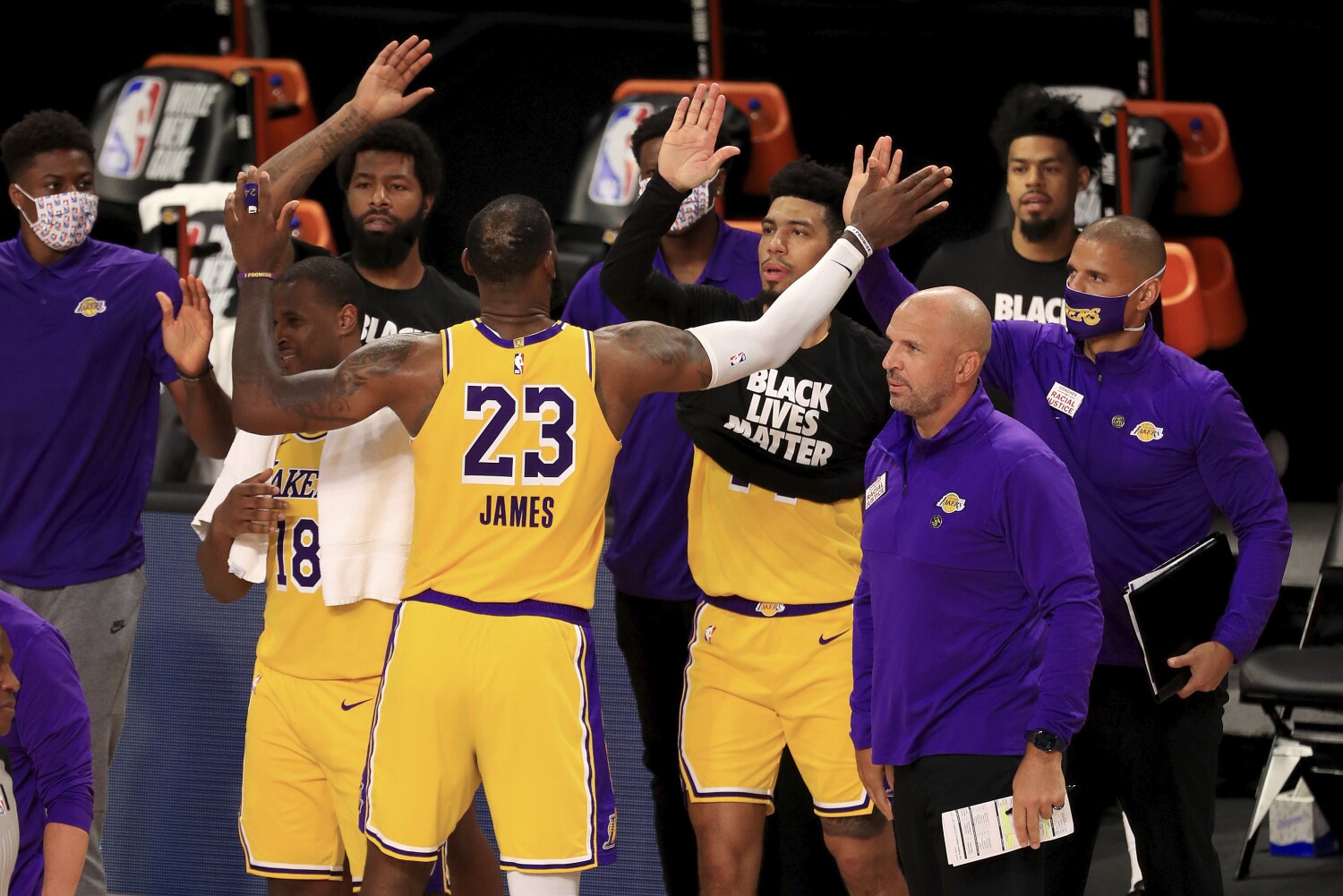 J.R. Smith standing in a corner with his arms raised. Kentavious Caldwell-Pope banging on the divider in front of the Lakers’ bench. Anthony Davis and JaVale McGee leaning against it as if it were a starting block.
LeBron James leaping as he argued a call.

These were the images of the Lakers fans present — no other fans were in the building for the team’s “home game” on Thursday night, their first game of the NBA’s restart. These were the people who urged on the team as it worked to build some separation from the Clippers, attempting to grow a hard-fought lead.

When the stakes were highest for the Lakers, they came alive for each other as they often do.

And the other constant for the Lakers when the stakes are highest also came to fruition Thursday. LeBron James scored with 12.8 seconds left, recovering his own miss for the go-ahead basket, then he defended both of the Clippers’ stars to prevent overtime.

“I love having the ball in my hands late in the game,” James said.

The fourth, though, was like no game either team had ever played before.

The only spectators in the building who weren’t there to work walked in about 25 minutes before the game began — NBA players who were free for the evening. Damian Lillard, C.J. McCollum, Carmelo Anthony, DeMar DeRozan, Kyle Lowry and Corey Brewer were among them. Many of them wore hats, a few bobbed their heads to Nipsey Hussle’s “Racks in the Middle” and all of them wore masks — or at least had their masks hanging from an ear.

Davis scored 34 points, 32 of them through the first three quarters. James scored 16 points with 11 rebounds and seven assists.

Neither the Lakers nor the Clippers could quite find a rhythm in the first quarter as they combined to commit 21 fouls. Davis was the quarter’s high scorer with 14 points — eight of them from the eight free throws he attempted.

The choppy play continued in the second quarter, with Clippers guard Patrick Beverley loudly and frequently pleading with the officials. For a while the loudest noises in the building were of coaches and players arguing calls.

Less than a minute into the second quarter, James offered a highlight. As he began driving down the lane, Leonard shook free of Dwight Howard and got his arm in James’ way. But James drove around him for a dunk that gave the Lakers a 13-point lead.

The second quarter, though, was when the Clippers’ defensive intensity began to turn. The Lakers made only six of 20 shots in the second quarter and ended it with just a two-point lead. They took the lead early in the third quarter with a three-pointer by George that made the score 55-54.

Later, two possessions in a row, George scored back to back three-pointers, extending the Clippers’ lead to six.

James halted an 8-0 Clippers run with a three-pointer of his own. Davis scored 12 third-quarter points to cut their deficit to 77-76 heading into the final 12 minutes.

“We just wanted to make sure they didn’t run away with it because they definitely had a chance,” Davis said.

To start the fourth quarter, Davis got a rest. He sat on the corner of the bench and shouted toward his teammates, clapping when they succeeded, wiping his brow in between, jumping out of his seat when a three-pointer by Kyle Kuzma gave the Lakers a five-point lead.

Davis was the reason the Lakers were even in position to take any kind of lead. When it seemed that the short-handed Clippers, who never had their full team in the NBA bubble, were threatening to pull away, Davis put a stop to it. Through the first three quarters, his 32 points included a pair of three-pointers. He made 14 of his 15 free throws attempts.

George made a three-pointer with just under 30 seconds remaining to tie the score at 101. James countered with a putback layup during which he seemed to hover in the air in front of the basket.

A recorded crowd chanted “de-fense” as the game’s final seconds ticked off. James guarded Leonard into frustration, then switched onto George, whose off-balance shot attempt missed.

Letters: What was all that about taking a knee?