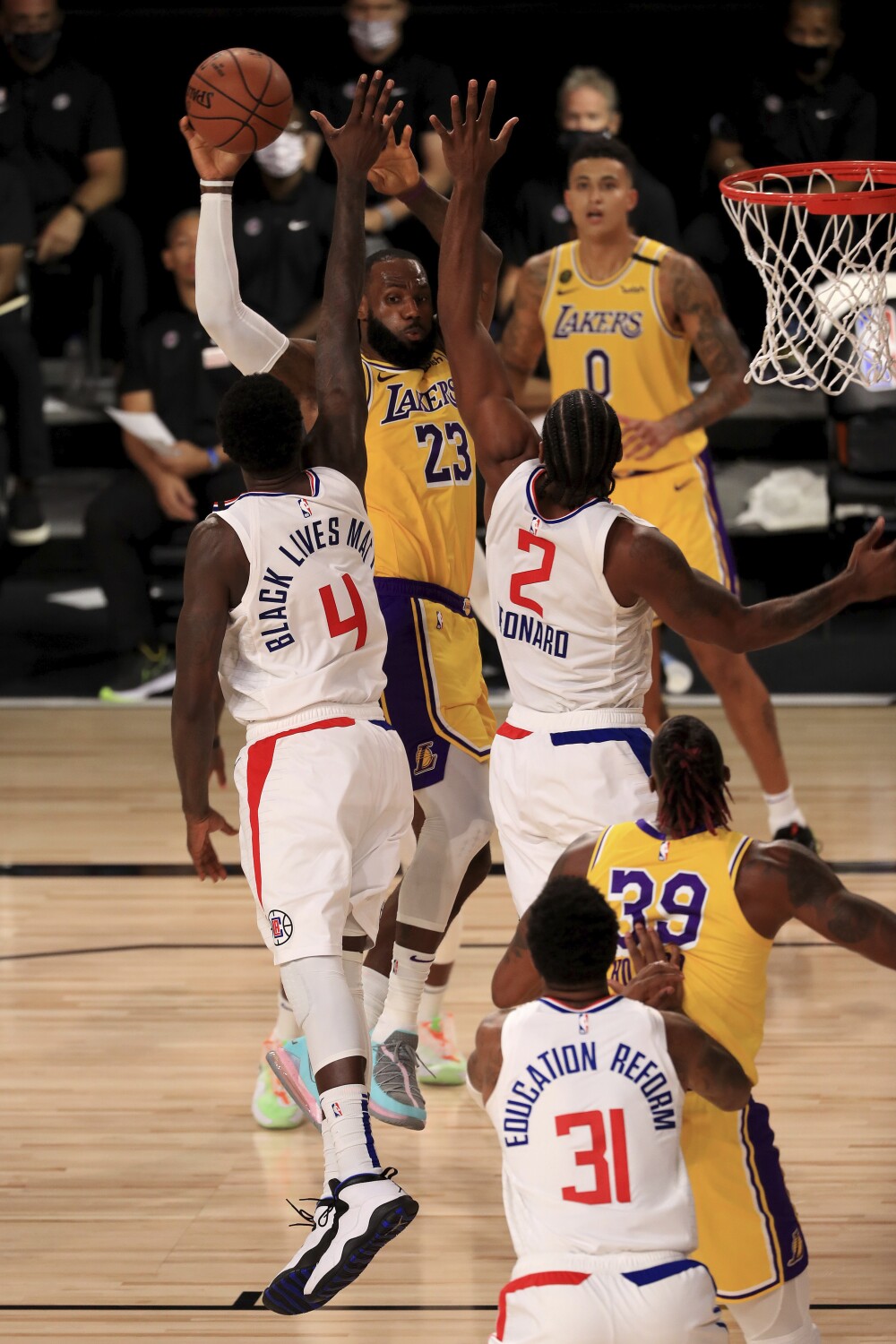 The bubble could not insulate the intensity.

Patrick Beverley was still whining, LeBron James was still barking and, by the end of the night, the neighbors were again engaged in their beautiful feuding.

The quarantine could not prevent the passion.

The Clippers’ Paul George nailed a big three in the face of the Lakers’ Danny Green to tie it. The Lakers’ James came back with a follow-up put-back layup in George’s face for the lead. James locked down George on a clunker to end it.

All of this happened in the final minute of a game 141 days in the making, a restart of a rivalry that everybody saw coming and nobody saw coming.

It turns out, Lakers-Clippers is a moveable feast.

The Lakers’ 103-101 victory Thursday night in a cramped, quiet and very odd Disney World gym somewhere in Orlando, Fla., was played as if both teams were still hanging out in a Figueroa hallway.

Yeah, it was a pretty jaw-dropping night despite being played in an environment where the bystanders were required to wear masks, and it surely brought a sigh of relief to Southern California basketball fans so worried about the ruination of their backyard brawl.

Yes, if Thursday is any indication, the Clippers and Lakers are the still the two best teams in the West and will surely meet in the conference finals on the other side of the country next month.

No, it won’t be the same as playing in front of 19,000 raving fans spending three hours on the verge of a fight. No, it will not feel like a historic and hardened city showdown because it will be lacking, well, the city.

But, yes, the players still care deeply and the uniforms still matter greatly, and here’s guessing we’ll still witness a seven-game show for the ages.

It will be far away, accessible only on television, and in a gym so quiet one could hear the shoes squeak.

But, goodness, it will be lit.

“We’re two teams in the same city, two teams that’s fighting for one common goal, to win a championship and bring it to the city of Los Angeles and their respective fan bases,” James said afterward. “So many competitors on the floor, going out there representing purple and gold, representing Laker Nation, those guys doing the same thing for their fan base.”

Wherever and however it is played, James said, it will always be the battle for Los Angeles.

They left off back in March with the Lakers having won just one of the three games between the teams. The series will now go into the postseason wonderfully even and headed in the same direction, as the Clippers are expected to officially even things up by adding missing bench stars Lou Williams and Montrezl Harrell along the way.

“I don’t need to see the Lakers, I’m fine with that,” protested Clippers coach Doc Rivers, who admitted the mild surroundings didn’t alter the madness. “At the end of the day it was a competition, you could feel that out on the floor.”

The first feelings were those of solemnity, as all personnel from both teams took a knee and locked arms during the national anthem in a united statement for social justice. And to think, as recently as four years ago, San Francisco 49ers quarterback Colin Kaepernick was blackballed for doing the same thing to protest police brutality. It was a night of effort that began with enlightenment.

“I hope we made Kaep proud,” James said. “Kaep was someone who stood up when times weren’t comfortable … it had absolutely nothing to do about the flag … people never listened … I did … we just thank him for sacrificing everything that he did.”

The game began and it was clear that Davis — trying to advance out of the second round of the playoffs for the first time in eight seasons — is on some kind of mission. After suffering an eye injury during a recent scrimmage, he scored 32 points through three quarters despite being knocked around for 17 throws — of which he made 16.

”It still felt like a game back at Staples,” said Davis. “More physical, gritty guys who were getting after it, competing on both ends of the floor, both teams, that’s what makes it so fun.”

The Clippers roared back from a 13-point deficit to take an 11-point lead in the third quarter with Leonard and George lunging everywhere and combining to make nine three-pointers. Not a soul was surprised. That’s what they do. They hustle their way back into games. That’s why their potential hallway series will probably go the distance. Even short-handed, the Clippers are unafraid to stand toe to toe.

“I thought we attacked more, we pressured them more, we got back to playing our style of play, the game changed,” George said.

But then, the Lakers and James had the last word, and emphatically so. Do you know it’s the first time in James’ two seasons as a Laker that he’s had a game-winning shot in the final 15 seconds?

“I want the ball in my hands late in the game, tie game, being down, being up,” he said. “Be aggressive.”

When it was over, when James had not only won the game with his hustle but also defended both George and Leonard on the last play, both teams wandered off the floor in seeming relief. They might be stuck in a bubble, but at least they could still play the kind of basketball game they once played so very long ago.

“It’s 2020 … it’s something that we’ve never seen before … we are in the land of the unknown,” James said. “Things are happening for the first time … you just take it for what it is … we’re still living, I’m alive … that’s a blessing.”

Alive, too, apparently, is the rivalry that could define a Los Angeles legacy. Where so much else on the sports landscape has changed in this new pandemic world, Lakers-Clippers has apparently survived. Blessings all around.

Have Dodgers reached their potential? Dave Roberts says no