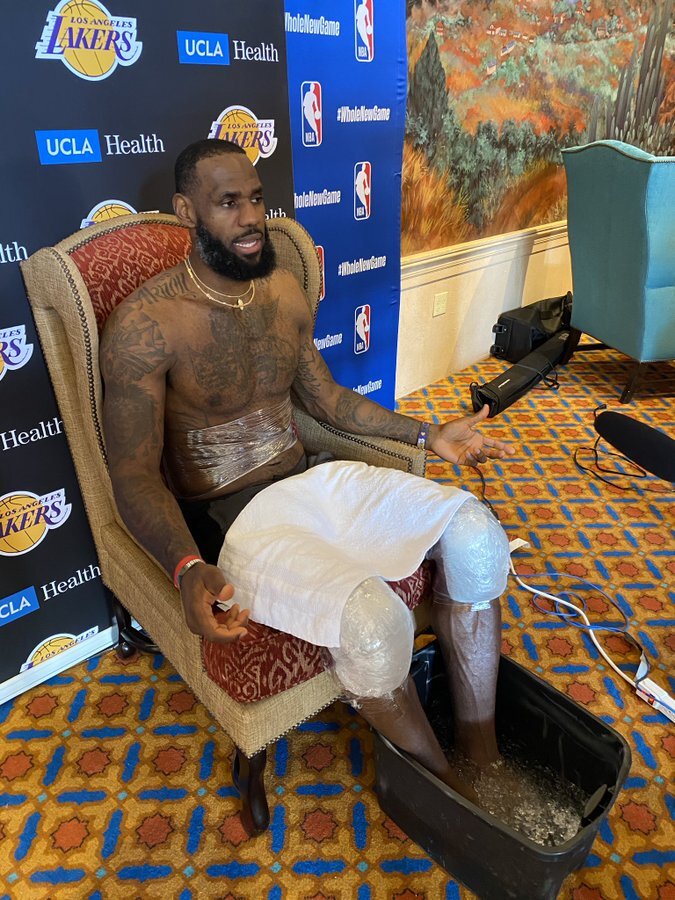 LeBron James sat on the edge of a practice court at the Coronado Springs resort ballroom with ice taped to each of his knees and an ice bucket nearby.

After practices and games the Lakers star’s ritual includes icing his joints and then plunging his feet into the ice bucket. He sets a timer on his phone to alert him when they’ve soaked for long enough. Life in the bubble, though, has created the need for adjustment.

James would normally have reporters gather around him in the locker room while he soaked his feet, but in the bubble players have to leave the practice court to sit in front of a camera set up for a video conference. So James and his ice bucket made their way into the hallway. The chair that awaited him was too tall for him to comfortably sit, so James pointed at a nearby lobby chair — an ornate wingback chair in maroon and beige. Two people helped bring it over to James, who helped settle it in place.

“Everybody’s gonna be like, ‘LeBron’s got his own chair! Throne!’” James said, jokingly imitating the voices of perceived critics with a laugh.

James was simply keeping his routine. It’s a task that grows more and more important for him as the playoffs approach, but this season even more so than normal. With a four-month break because of the COVID-19 pandemic, James’ body was denied the rhythm he normally follows. As the Lakers prepare to start games that count on Thursday, James continues to adapt to his new environment.

“Everything is different and you have to be able to adjust to it,” James said. “I don’t know as far as if it was like a home game at Staples Center. It won’t have that feeling. Because our fans just give us so much energy, our fans give us so much support and we want to try to give that back to them on the floor.

“But also at the same time we know our fans back in L.A. and all over California, all over the world, want us to, are looking forward to seeing us play again. It’s still our job to go out and perform because they’re still supporting us behind their phones or tablets or TVs, laptops or whatever the case may be.”

In his 17th season, James knew that the four-month break would cause some problems. He balked at the idea that the rest would be helpful.

“My body was wondering what was going on because it was right there where my body started getting into sixth and seventh gear into the playoffs,” James said. “And then it was like complete shutdown. So I’m kind of just gearing my body back up.”

James said the scrimmages helped his adjustment even though he only played in two of them. He was able to do an individual on-court workout Monday before the Lakers’ scrimmage, then rested during it.

“These eight regular-season games that we have here will also help on getting my body where I need it to get into getting into the playoffs,” James said. “I’ll be very smart listening to my body. Our coaching staff and our training staff have always been smart and wanted to have open dialogue with me about it as well so I pay attention to that.”

Before last season, James had made the playoffs 13 years in a row and played in eight consecutive Finals. He’d grown comfortable with his process during that time. His intensity heightens and he typically stays off social media, even turning off his phone at times.

Just as he’s had to adjust his health routine, he’s also been adjusting other routines — the pandemic and all of this year’s uncertainty means he’d be uncomfortable completely disconnecting from his family.

After he finished his interview, Frank Vogel appeared nearby, ready to start his video conference. James told his coach that his seat was ready.

Vogel, in jest, thanked him.

“No problem,” James said. “No matter what they say about me, I’m one of the good ones.”

He picked up his ice bucket and walked off, carrying it back into the ballroom.

How the Lakers rebuilt a champion more than a decade ago