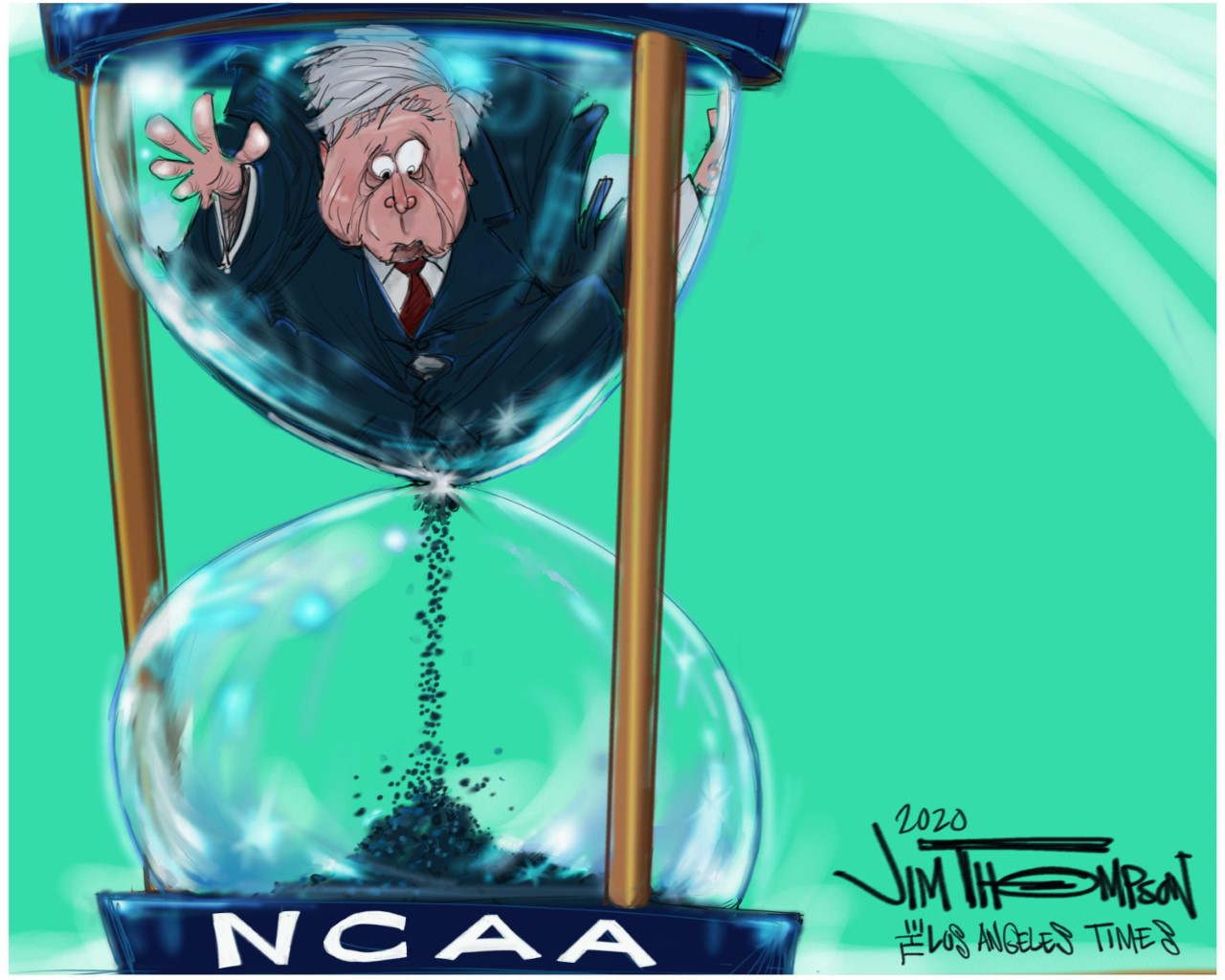 I am appalled by the 13 extortionists (supposed student-athletes) who would use COVID-19 and Black Lives Matter to “demand” money from the Pac-12. They are clearly misguided. In my world, requests go a lot further than “demands” and threats. I hope their “demands” are met with the silence they deserve.

Thank you, Mark Ziegler, for the reality check of your article regarding the demands of football players. Only those who’ve been to college without athletic privilege understand what he is talking about. In a time where “white privilege” is told to take a seat, maybe those with “college-athlete privilege” should open their eyes and realize exactly what they continue to be given and appreciate it instead of ridiculously demanding more.

Of all the corrupt and ignominious acts committed by major college sports over the past couple of decades, the present push to offer competitions at the time of the worst pandemic in a hundred years has to be the worst.

This is aggravated by such things as the Pac-12 moving the USC-UCLA football game to September. This is solely motivated by the promise that television revenues will be there for such a marquee match.

Added to this is the push to unionize college athletes as though they were employees. The support for such an effort is based on the idea that these players could make money in the private sector. This could be true and would be possible if the NCAA did not serve as a minor league for football (and some other sports). Any athlete who wishes to play sports as a means of livelihood should be free to do so in a business model that does not pretend to be about education and improving the mind of its participants.

So it is time to defund college sports and return them to the sidebar they were intended to be from the beginning.

John Lewis is smiling. Looks like we have some “good trouble” in the NCAA. Stay the course. Follow the money. This is war.

The biggest threat to this country’s survival is the ego of our leaders. Baseball is continuing because Rob Manfred wants to say, “I’m not a quitter?” Neither was Custer, and he got a lot of people killed.

“It’s so impressive that the Dodgers are keeping their promise to wear masks in the dugout,” said absolutely no one.

Who we gonna lose first?

Baseball should have taken the same idea that basketball and hockey used. Play in limited areas. It would have been great to see the teams of one league play in Williamsport, Pa., where the Little League World Series is played, and teams of the other league play on the field where “Field of Dreams” was filmed in Iowa.

In talking about living in the NBA bubble, LeBron James said “Nothing has ever compared to this. It’s a huge sacrifice we’re all making.” Perhaps James and his fellow NBA multi-millionaires can arrange Zoom calls with U.S. troops serving overseas to get a few tips on how to handle their sacrifice.

New Dodgers season but some things stay the same; Cody Bellinger will try and hit a ball rolling over the plate, Justin Turner still needs a shave and a haircut and Orel Hershiser is still the worst announcer in all of sports.

It’s great to have sports back. As soon as Chris Taylor made his laser throw resulting in a double play and the end of the game on Wednesday night night, I: (1) high-fived my girlfriend’s teenage son, (2) called my 91-year-old father and (3) texted a bunch of buddies to discuss the Dodgers’ thrilling victory.

I know Dave Roberts is too nice a man to say it, so I will. The problem that jumps out at me every year is Chris Taylor and Kike Hernandez, who swing from their stirrups every at-bat, no matter the situation! For years they have seen Justin Turner do some great situational hitting, but neither of them bothered to learn anything. This year they have a great opportunity to watch Mookie Betts hit.

Taylor and Hernandez appear to hit for themselves, wives and girlfriends. They have a macho approach, long arcing launch angle swings that have not been working for years. They fail to realize they must make contact before they can launch.

Both Betts and Turner have short direct swings and I advise Taylor and Hernandez to emulate them.

I’ve been a fan of Dodgers baseball for 75 years I followed them from Brooklyn to L.A. I watch them on TV now, but I can’t watch the game because of simulated crowd noise. I don’t know if you would call it white noise or just static, but after five minutes it gives me a migraine.

A Dodgers game was scheduled to be on ESPN this past week but was “locally” blacked out here in Orange County, 70 miles from Dodger Stadium. Really? Given that no fans can attend games in person (which isn’t even applicable because the game in question was played in Texas), and that I can’t even get a certain cable company in our town even if I wanted to switch providers, you are really going to keep blacking out games? What a great way to lose friends and alienate people during these troubling times. And, by the way, in case the Dodgers weren’t aware, we already have a local baseball team here in Orange County (despite the team’s name) that is never locally blacked out.

Arte Moreno, have you happened to notice how the Dodgers you nixed in a possible trade are currently performing with the Dodgers? How is the Rendon signing working out for you? It seems to me that David Fletcher is coming into his own this year as a complete player and has been more than capable while hitting about 200 points higher than your current third baseman. Just imagine how you could have fortified your pitching staff and strengthened your club with the amount of money spent on the former Washington National and the missed opportunity of trading for Joc Pederson and Ross Stripling.

Once again, the Angels will continue to struggle from the position of weakness and spend the whole season trying to achieve success and climb the ladder from the bottom of the pack. Thank goodness this is a shortened season and we don’t have to suffer this pain much longer.

Barely two weeks into the season with the best player in baseball on their side and the Angels are already done. They hold on to a middle infielder batting .200 (Rengifo) and continue to play Pujols and Upton, who might not hit .300 between them.

The attendance they have now is not much lower than if there were actual fans in the seats. Angels, you’ve done it again…

Seven-inning doubleheaders now? I can see where this is going. My prediction: the Dodgers win the World Series when Mookie Betts beats Gerrit Cole four games to three playing rock, paper, scissors.

It’s funny, the universal DH has been in use now for two weeks and the earth has managed not to spin off its axis. I know we miss the excitement of the rocket-science level double-switch and the bold strategic decision to bunt with a .120 hitter and a runner on first, but we’ll just have to make do with getting to watch nine major league hitters take their turn at bat.

Can we please just keep the politics out of sports? I gave up on basketball, am questioning football and now am fearful for baseball. Can’t we just enjoy sports for themselves? There are plenty of ways to express political opinions — sports should not be one of them.

I’d like to see a simple change to the way the athletes are showing their support for changes to justice system in the US. Kneel in protest with your hand over your heart during the anthem. This shows you support the protest movement but you also show respect to the flag, anthem, and the U.S. One can love the country but still want to make changes that will move the country closer to the ideal of “equality and equal justice for all.”

I believe USC is misguided in creating a Black Lives Matter Action Team. BLM stands for much more than one race. It is about social injustice and awareness of the racism against all groups of people, no matter the amount of pigment in their skin, their religion or their sexual preference. USC should rename its new team the Social Injustice & Awareness Action Team. That would actually be fair to all groups of people who have suffered injustice.

Isn’t it funny, if a basketball player stands for the national anthem, he has to explain why?

I wonder if Mike Trout wants his new son to follow in his base path?

Who are those guys?

This was your Sunday headline: “Experts say playing before no fans can have a wide range of effects on athletes.”

There are “experts” on playing in front of no fans?

Shohei Ohtani as one-way player? Idea might be gaining steam

UCLA athletes set to return to campus on unfamiliar terms