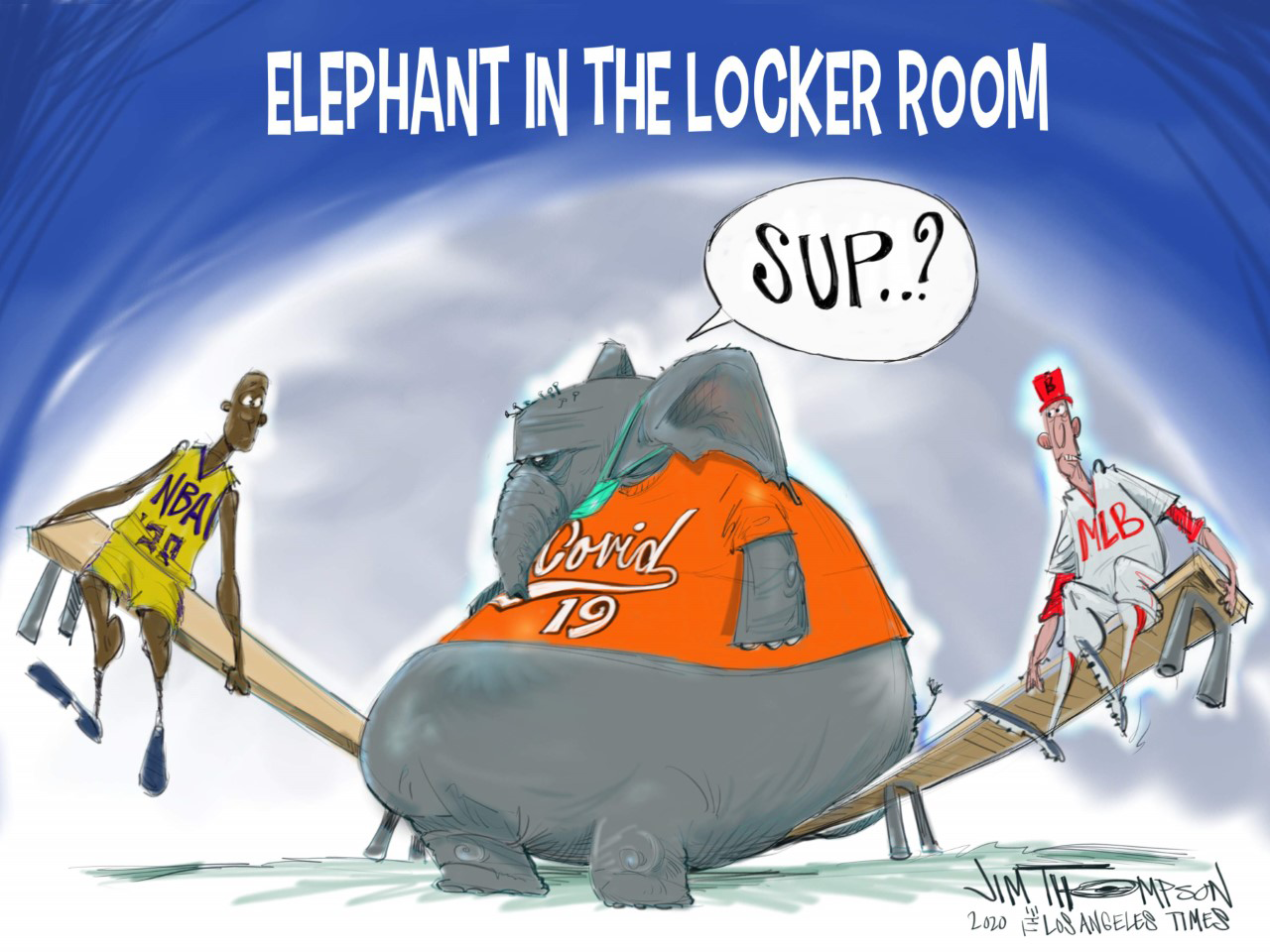 Bill Plaschke, you have raised an interesting question [“Positively Dangerous,” June 21]. In the discussion of restarting any sports programs anywhere, first remove the concept of money from the table. With that gone, I believe that the majority vote would be that restarting is just too dangerous, too much of a risk. So, let’s call off all high school, college and pro sports for a year. Maybe the NCAA shuts down, no great loss, and the students can go back to school.

Put money back on the table and what happens? I believe that the scale would tip back toward a restart. Well, since none of the high schools, and very few college programs make money, shutting the programs down would be a net plus financially. OK, so we do not have 50 college football bowl games. Nor do we have 50-plus college basketball playoffs.

Things I thought I would never see: Temperature in Hades reported at zero, my wife recovered from knee surgery, policemen taking a knee, a Bill Plaschke column I totally agree with. Well… three out of four ain’t bad. Great job, Bill!

I love football, but the idea of UCLA or USC playing this fall troubles me greatly.

The coronavirus doesn’t play favorites when it comes to teams, locker rooms or stadiums. Case in point, numerous college and professional players now have tested positive for COVID-19. They play for powerhouse programs at Alabama, Auburn, Marshall, Florida State, Clemson, Texas, Kansas State and West Virginia, for example, as well as NFL teams like the Cowboys and the Texans to name but a few.

I realize hundreds of millions, if not billions, of dollars are at stake if football is canceled this fall; still, I have to ask: Which is more important, healthy sports budgets or a healthy society?

I urge everyone involved in football — from universities to coaches and owners alike — to reconsider their decisions to kick off the 2020 season this fall.

With baseball having such a short season, my Rotisserie League will have to be changed to a Microwave League.

Now that we’re going to play baseball again, let’s get down to real baseball issues. Which Astro gets hit by a pitch first?

Apparently, the resumption of the baseball season will feature the unnecessary gimmicks of instituting the designated hitter in the National League, as well as having extra innings begin with a runner on second base.

It is hard to have any respect for a commissioner who has none for the traditions of the game, and who evidently believes that the attention span of fans is as limited as his own.

I’m deeply disappointed in Major League Baseball’s decision to start extra-inning games with a runner at second, ostensibly to speed up games. Why try to shorten the most exciting part of a game? Extra innings are exciting — it’s the first six or seven innings that should be sped up.

Time for a change?

It is surprising to me that the slur that is the name of the Washington NFL team is printed in the L.A. Times on a regular basis. I am in a football pool and use the team names of all except Washington. Change starts with me. I challenge the L.A. Times to do the same.

“Power to the Player.” Powerful article! One of the things I was most impressed with is how articulate the players were in expressing their thoughts and feelings. Hardly the dumb football players, eh?

It’ll be interesting to see how it plays out, especially in schools in the South. Are the coaches truly seeing the light, or just adjusting their position in order to recruit? I prefer to look at it as, even if it just to be able to recruit, mouthing the words, if they are held to it, will become the truth of the next generation.

Great piece by LZ Granderson on Clayton Kershaw. It’s hard to believe that 52 years after Tommie Smith and John Carlos raised their fists at the 1968 Olympics we are still where we are today. I was unaware at the time of Peter Norman’s supportive stance. I’m not surprised that Kershaw has picked up the torch because, in addition to his amazing talent on the mound, he has shown an outstanding character from day one. Bravo, Clayton!

I also have to confess I was unaware of Juneteenth’s significance until now. It was never mentioned in all my schooling since I arrived as a third grader to a segregated South in the early ’50s. I think the day has come when we move forward with real change and make this an even better country. Martin’s “Dream” is reachable.

Watching the CBS coverage of the Heritage golf tournament got me thinking about golf culture, where course ethics are above reproach and the business is, well, not. Is there any excuse today that CBS has zero minority broadcasters, especially since Tiger Woods made the networks rich? Between CBS and NBC there are about 16 full-time reporters. NBC workhorse Mike Tirico is the only person of color.

It’s great that the Angels and Ducks shared their plans with each other to coordinate what looks like ambitious plans to transform the Platinum Triangle into fantastic developments.

Maybe it’s time for Arte Moreno to show that he really is supportive and loyal to the Anaheim taxpayers who have given him a sweetheart lease deal for all these years.

In the spring of 2015, my grandson attended a football camp at USC. His coach for offensive linemen was Max Tuerk. Max left such an impression on him that he wears No. 62 (Chargers) for Claremont High. R.I.P. Max.

There is no historical substantiation to remove the Tommy Trojan statue on the USC campus, but there is plenty to corral Traveler, the name of Robert E. Lee’s horse.

Angels’ José Molina does his best to honor Roberto Clemente