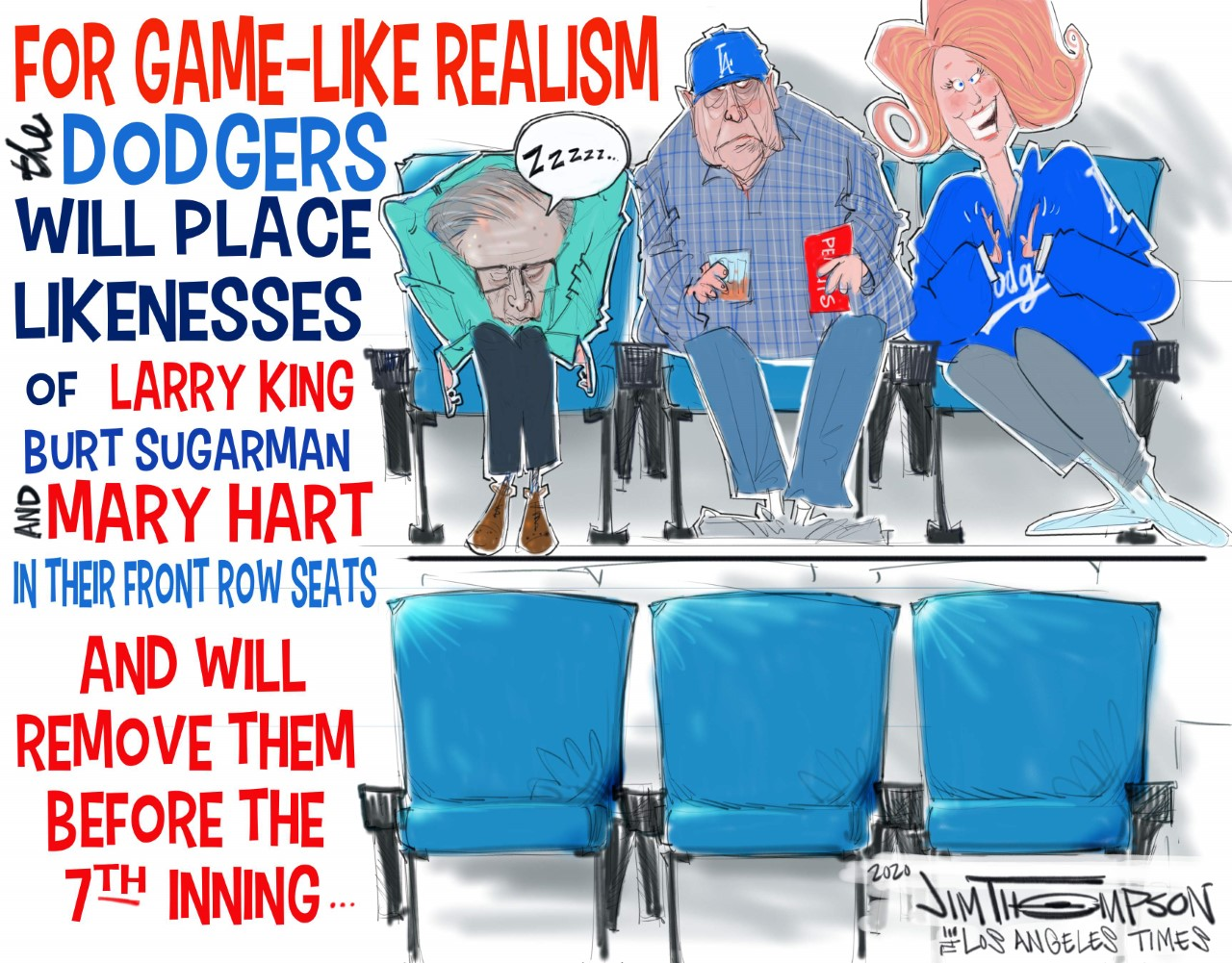 Keep me safe from the ballgame

Keep me safe from the crowds

I don’t know if we’ll ever get back

Without one it is a shame

At the old ballgame!

(If only Harry Caray were still alive to give it voice.)

Movie pitch for a holiday season blockbuster: “The Natural” meets “All the President’s Men” meets “From Russia with Love.” On Nov. 4, Mike Trout hits a walk-off home run off the light tower in the seventh game of the World Series against the Dodgers in front of a packed stadium of ecstatic Orange County fans. The World Series is delayed for a week so that a vaccine, provided by a lab in Moscow, allows a standing-room only crowd for the final game of the Fall Classic.

It doesn’t get any better than this. Opening day. The TV viewing issue resolved. And now the Dodgers sign Mookie Betts to a long-term contract. The only thing that could make this day better would be for Rob Manfred to do the right thing and finally announce that the Houston Cheaters have had their 2017 World Series Championship vacated.

This would be my personal definition of “Blue Heaven on Earth.”

For decades MLB owners were afraid fans would stay home if they showed home games on TV. MLB owners knew they had no product without a big boisterous stadium crowd.

The Dodgers’ opening game proved that.

The last time we’ve heard descriptions like “driven to excellence,” “practices harder than anyone else,” and “sets an example by his overall work ethic,” a guy named Kirk Gibson came to town. And we all remember what happened then. Welcome to L.A., Mookie. No pressure…

Unless they’ve found a cure for cancer or the coronavirus, no one, and that includes Mookie Betts, is worth $365 million. More power to you, Mookie. You’ve made fools of Dodgers management. Again.

If the Dodgers win the World Series then they can party like it’s 1981, only a lot less.

Jorge Castillo writes, “Joe Davis said he and Orel Hershiser will have to change their formula, reducing their periods of silence in big moments without fans present to provide organic noise.” What “periods of silence”? These two never shut up — especially Hershiser! And when they are not talking about the game, which happens way too often, then they talk about their favorite rock bands, their favorite food, how they like their pizzas prepared and on and on.

We feel like we are eavesdropping on two friends having a private conversation, not watching a major league game.

What was that racket on ESPN on Thursday night? It certainly wasn’t play-by-play. When you come to Vin Scully’s house, you certainly ought to make an effort to talk about what is happening on the field. Instead, we got a steady stream of time-delayed conversation while the announcers interviewed each other. Perhaps in the future the Dodgers could “accidentally” get the wires crossed and substitute their broadcasters. Charley Steiner in his recliner is way better than this.

If the idea is to have the cardboard cutouts in the stands at Dodger Stadium resemble fans, shouldn’t half of them be looking down at their cellphones?

I could not help but notice that the fans behind home plate at the Dodgers game appeared to be board.

Like all Dodgers fans, I was looking forward to seeing Clayton Kershaw on the mound on opening day. Good thing we had those commercials for tires and shoes…

The MLB season may be just 60 games this year, or it could be shortened if a COVID-19 spread occurs.

Either way, players’ individual stats should count toward their career totals … with one possible longshot exception. If a player compiles a batting average of .400 or higher (perhaps even topping Ted Williams’ .406 in 1941) then that accomplishment should not be given unasterisked validity.

I wonder if MLB can explain the process of how they do “fast testing” on its players. I’m sure the general public would be interested in the concept. Not only MLB, but every other major sports franchise that somehow has the preferred “connections.”

Anyone who has followed the Angels through the years could not have been surprised when newly acquired Anthony Rendon went down with an “unpredictable” injury. The curse of the Angels struck previous Angels savior-to-bust free agents including Bobby Valentine, Mo Vaughn and Josh Hamilton and has now come for Rendon.

The doctor is in

To open this infectious disease-delayed baseball season, the Washington Nationals invited Dr. Anthony Fauci, America’s favorite immunologist, to throw out the ceremonial first pitch. I was hoping it would be something like a flat curve.

With the NHL’s tradition of reporting injuries by using the vague terms “upper” and “lower” body injury, will it now be reporting positive COVID-19 cases as “inner” body injuries?

Johnny Juzang on becoming eligible for UCLA: ‘It’s a blessing’