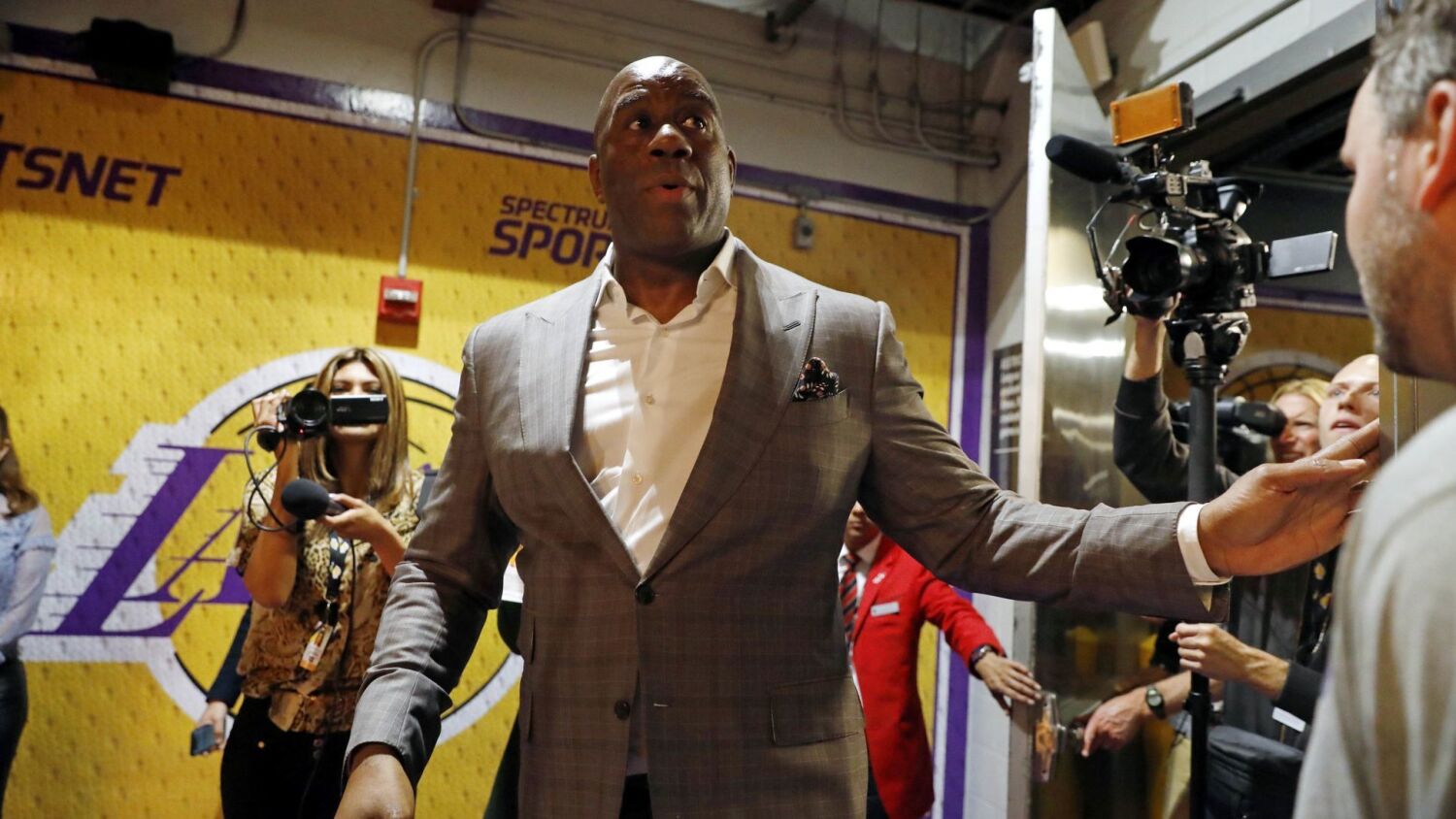 If baseball crowns a World Series champion in this truncated season, the players will have endured three months like no other. In order to navigate a season through a pandemic, the players will have to make accommodations: frequent testing, mask wearing and social distancing off the field, road trips with nowhere to go besides the ballpark and the hotel, even the occasional quarantine.

Dodgers co-owner Magic Johnson has lived with a virus for 29 years, with a daily regimen of medication. If he does not follow that protocol strictly, he puts his health at risk.

Johnson knows athletes, and he knows championships. He won five titles with the Lakers, and he said that what he did as a team leader in the 1980s is what baseball’s team leaders have to do in 2020.

“And that’s what we did. So now leaders have got to step up.”

Justin Turner has done that for the Dodgers. The team has reported no breaches of protocol, and neither have the Angels.

Mike Trout rejoined the Angels on Tuesday, five days after he became a first-time father. He acknowledged that his wife was “worried” for him to return amid outbreaks on the Miami Marlins and St. Louis Cardinals, but he said the Angels players are taking the virus seriously.

“I feel safe here,” Trout said. “Everybody has been accountable, staying in their hotel rooms, doing the right things and making the right choices.

“It’s definitely scary for baseball. It only takes one person.”

Derek Jeter, the Marlins’ chief executive, said his team’s outbreak was traced to players leaving the team hotel in Atlanta — not to go to bars or clubs, but to get coffee, to buy clothes and to go a teammate’s house, the otherwise ordinary events that now are considered nonessential and potentially hazardous.

“Some of our traveling party had a false sense of security,” Jeter said.

The Marlins resumed play Tuesday, but the start of their first game in nine days was delayed while awaiting test results. Trout said the speed at which the virus tore through the Marlins and Cardinals clubhouses was an indication the league should test every player every day; routine testing is conducted every other day.

“I think the protocols are good,” Trout said. “It’s just the testing. If you don’t have testing every day, it’s going to be tough. You’re always trying to catch up.”

Commissioner Rob Manfred angered many players Saturday, with a sentence that was part of his explanation as to why he would back off from an initial suggestion that he might call off the season.

“The players need to be better,” Manfred told ESPN, “but I am not a quitter.”

The league officials and the players are all in this together, Johnson said, but ultimately the players have to hold one another accountable for the season to reach its conclusion.

“It’s got to be the players,” Johnson said, “because management can’t be the ones. You’ve got all these players, and you can’t manage or keep up with those guys 24 hours a day. That’s unrealistic. But players can police players too.”

In the wake of the two outbreaks, the league has added compliance officials to monitor player behavior in team hotels. Still, Johnson said, the players ultimately have to care for one another.

“You can’t be selfish,” he said. “You just can’t. That’s the word you’ve got to use. It’s not about them. You have to be unselfish, because when you’re doing the right thing, that means you are caring not only about yourself but other people — your teammates and your family. That’s for your health, your teammates’ lives, your families’ lives, everybody.

“You can miss out on fun for three or four months. I’m being real, right? That fun will be there and then it will be safe for you to go back to going out to restaurants and bars and nightclubs once we get this vaccine. But right now? ‘OK, I’ve got to do this for myself, for my family and for my teammates.’ That’s it.

The 60-game season prompted critics to claim a World Series championship this season would be illegitimate, and that was even before coronavirus-related postponements made it likely that some teams would play the full 60 games but some might play fewer.

“Whoever wins,” Johnson said, “they are the champs.”

The season might not be traditional, he said, but that does not make it unfair. It is not as if the Dodgers would play 100 games and three rounds of the National League playoffs, while the Yankees would play 60 games and advance directly to the World Series.