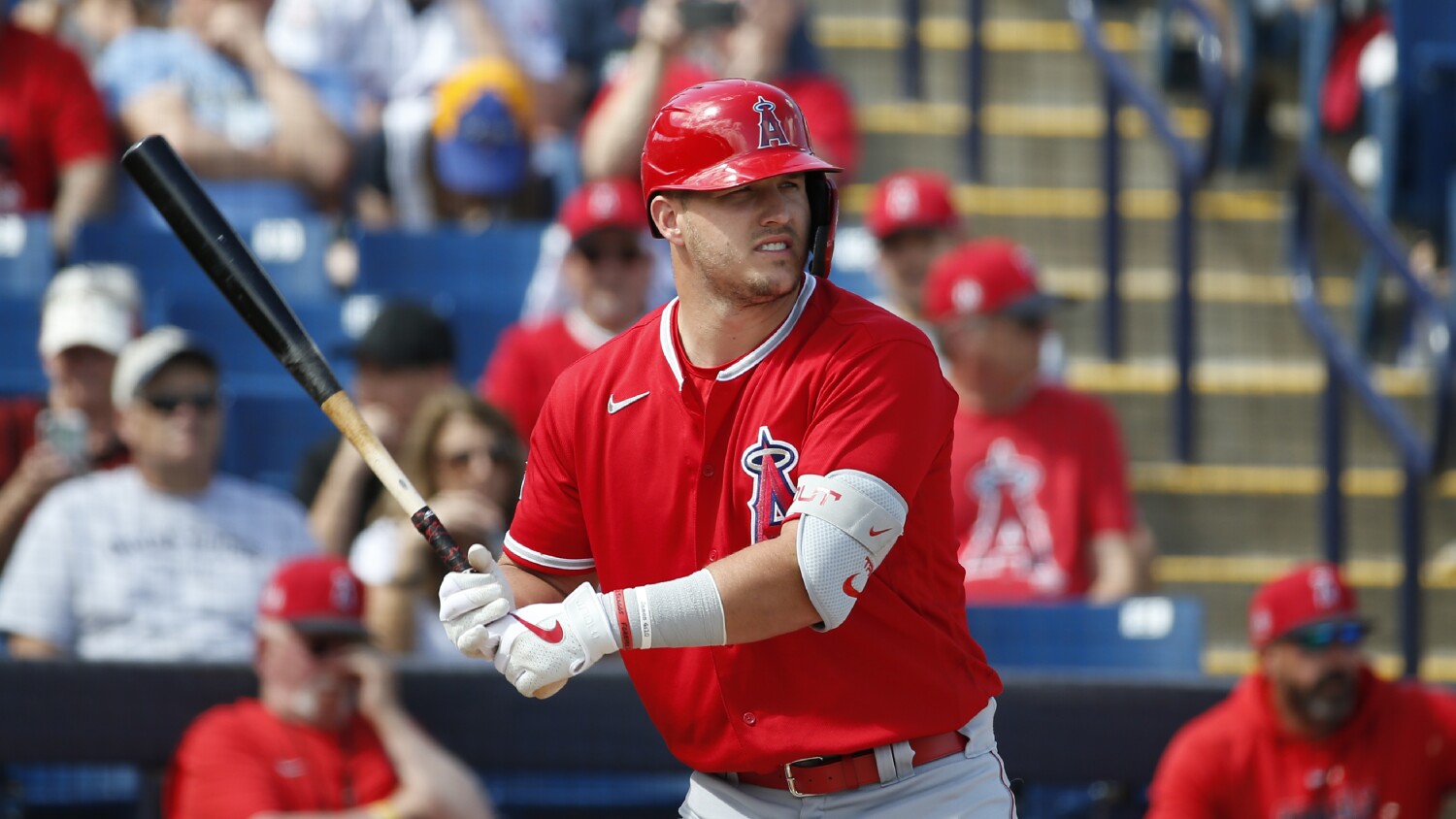 For all Mike Trout has accomplished in the game — three American League MVP awards, rookie-of-the-year honors, eight straight All-Star appearances, seven Silver Sluggers — the Angels star is about to experience something more exhilarating than any emotion he’s felt on a baseball field.

Trout’s wife, Jessica, is due to deliver the couple’s first child, a boy, on Aug. 3.

“Realizing I’m having a child in a couple of weeks, it’s surreal,” Trout said on a videoconference call before Wednesday night’s exhibition game against the San Diego Padres in Angel Stadium. “When I first started dating Jess [in high school], we talked about having kids, and now it’s happening.

“We’re very fortunate and blessed. I can’t wait to be a dad. I can’t even describe the emotions of it right now. Seeing Jess’ belly every night, talking to [the baby] … he’s kicking and going crazy. I can’t wait to meet him.”

Trout, who turns 29 on Aug. 7, plans to leave the team for the birth, but he has not yet formulated a plan for his departure or how many games he will miss.

“I haven’t thought about any of that,” he said. “I guess when the baby comes, we’ll figure it out. … I’m anxious, I’m nervous. I’m sure everything will go well, but I can’t tell you if I’m taking two days [or more].”

Trout and his wife have picked a name, “but we’re not telling anybody,” he said. “My mother-in-law is staying with us, and she still doesn’t know.”

Trout, who is entering his ninth full major league season, was at ease as he spoke on Wednesday’s call, laughing and smiling and speaking openly about his private life, which hasn’t always come naturally to him.

He seemed far more relaxed and jovial than he did on his first training-camp videoconference call July 3, when Trout expressed serious reservations about playing this season amid a global pandemic.

The center fielder said that day that he and Jessica were having daily discussions about the possibility of sitting out the season to avoid being infected by the coronavirus. Three weeks of workouts, intrasquad and exhibition games with no major setbacks have eased Trout’s concerns.

“The last time we talked, I was up in the air about playing,” Trout said. “Obviously, I’m playing. It’s been great so far. We had a couple positive [tests] early, but the guys have been respectful of each other. Everyone’s taking responsibility to wear a mask, social distance and be safe.

“I think the biggest concern the whole time was if there’s an outbreak. There hasn’t been one yet. If there was, we would have to evaluate the situation, do what’s right for my family.”

Staying virus-free will become more challenging as the Angels venture to other cities, stadiums and hotels during the 60-game season, which the Angels open at Oakland on Friday night.

“I told the guys since day one, all it takes is one guy to mess this up,” Trout said. “I was talking [on Tuesday] to a couple of the Dodgers guys — obviously, six feet apart — and it’s gonna be really tough. You have to really [show] respect and be accountable, especially late in season.

“If you bring the virus into the clubhouse when you’re fighting for the playoffs, I can’t even imagine what that would be like. Hopefully, there’s no outbreak. Being at home and controlling the atmosphere is different from traveling to a place like Houston right now, where it’s pretty bad.”

Keynan Middleton was not among the handful of Angels players who took the field for the national anthem Wednesday night. The reliever kneeled with his right fist in the air for the anthem in San Diego on Monday night in protest of social injustice and police brutality. … Manager Joe Maddon said third baseman Anthony Rendon, sidelined for a week by an oblique injury, will miss “a couple” of games in Oakland this weekend, “but the word is he keeps getting better and better,” Maddon said. “Let’s play it one day at a time and try to get him better sooner rather than later. You don’t want to bring him back early and lose him for the whole year.” … Reliever Taylor Cole has been sidelined by a right shoulder injury.