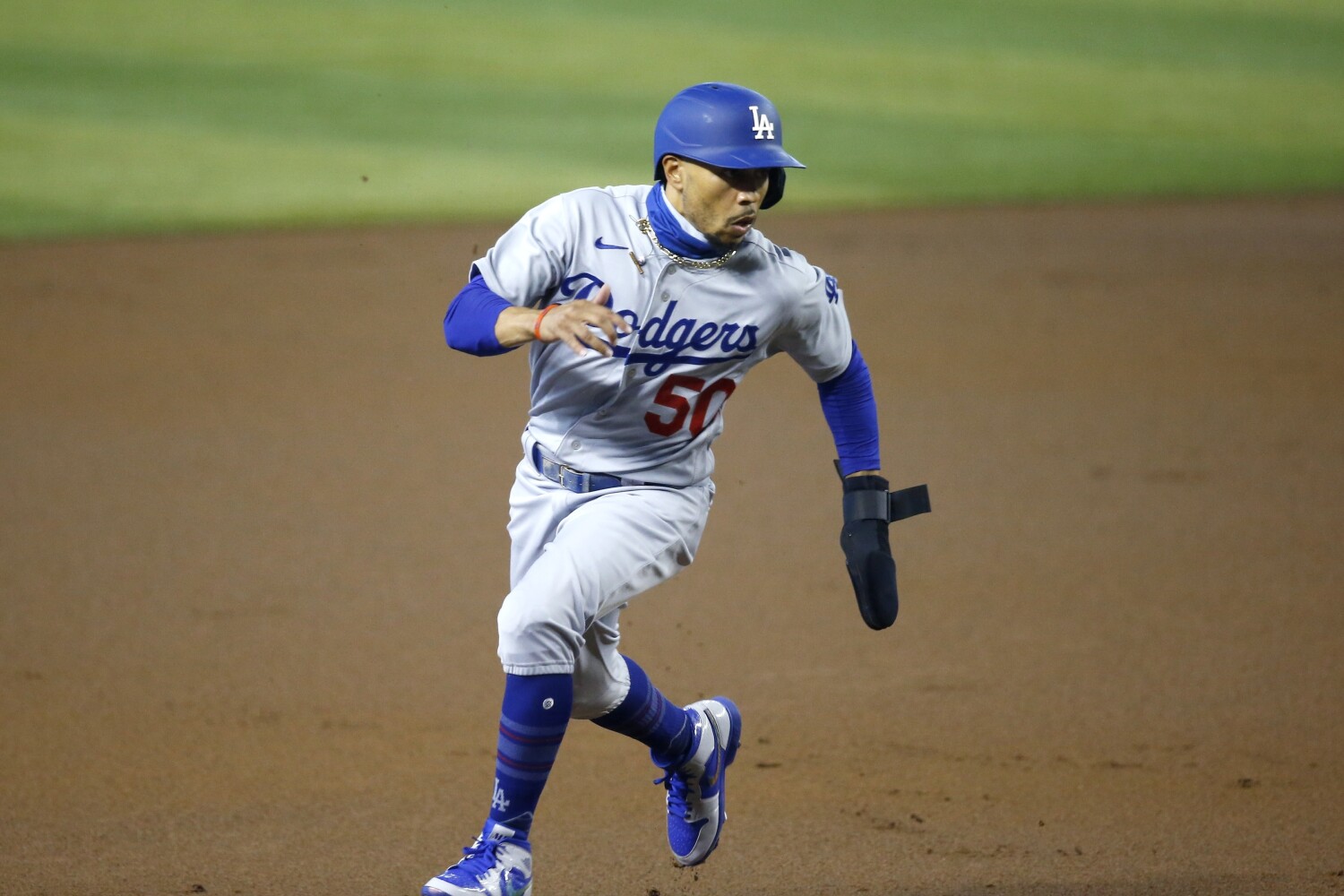 It’s hard to imagine now, the future American League most valuable player and $365-million outfielder for the Dodgers filling empty bottles and fixing broken equipment in the shadows of Friday night lights. Back then, though, Betts was becoming a multisport phenom in baseball, basketball and bowling — precursors to the professional success to follow.

His unglamorous role with the football team at Nashville’s John Overton High foreshadowed something important, an early indicator of the unselfish, team-first traits that have made one of baseball’s ultimate competitors an ultimate clubhouse guy too.

A decade later, the Dodgers got to see that side of Betts.

Though he didn’t start in any of the team’s three games this week against the San Diego Padres, restricted to defensive duties because of a swollen left middle finger, Betts’ intensity didn’t diminish. His commitment didn’t sour.

“You saw him in those dugout seats at Petco [Park] watching the game, watching every inning,” manager Dave Roberts said. “He wasn’t in the clubhouse with his shower shoes on. He’s a student of the game. He wants to be there for his teammates in any way possible. He’s always trying to help us out. … Something I already sort of knew, but it’s good to see.”

Bereft of any disgruntled side effects typical of some sidelined superstars, Betts happily obliged Roberts’ request to take the field late in Tuesday’s and Wednesday’s games. Though his finger was feeling better before Wednesday’s series finale, he followed the training staff’s orders to take an extra day off at the plate.

“There’s always a way to help,” Betts said. “So I’m going to find that way to help. That’s my personality, just trying to get in the mix to help the team win.”

Betts returned with ease Friday, hitting a first-inning double down the left-field line and a third-inning home run to deep left-center field in his first two at-bats.

“It was really impressive,” Roberts said of Betts, who also walked in the team’s 7-2 win over the San Francisco Giants. “Obviously, he’s one of the great players in the game, and I thought we were responsible for giving him some extra time to make sure his finger felt good enough to play and take the at-bats.”

In his last four starts, Betts is eight for 15 with four doubles and three home runs, raising his on-base-plus-slugging percentage to .983, third-best on the team, after a slow opening week.

That’s what the Dodgers were anticipating from Betts. From the moment he arrived from the Boston Red Sox following a February trade, the club knew what kind of player it was getting, the levels of production he’d been able to provide.

The real bonus thus far has been his impact off the field, an all-for-one attitude Betts articulated during an unexpected pep talk on the first full day of spring training camp and has continued to exemplify with his everyday actions since.

“Physically, there’s some things that I’ve got to pull back on,” Betts said Friday, peeling back the motivational layers that have made him an instant hit in L.A. “I get tired sometimes, exerting too much energy. But mentally, I have to figure out a way to just keep myself motivated. That’s by trying to find a way to learn, trying to find a way to help. Trying to find something to do in the game, because this game is very humbling.”