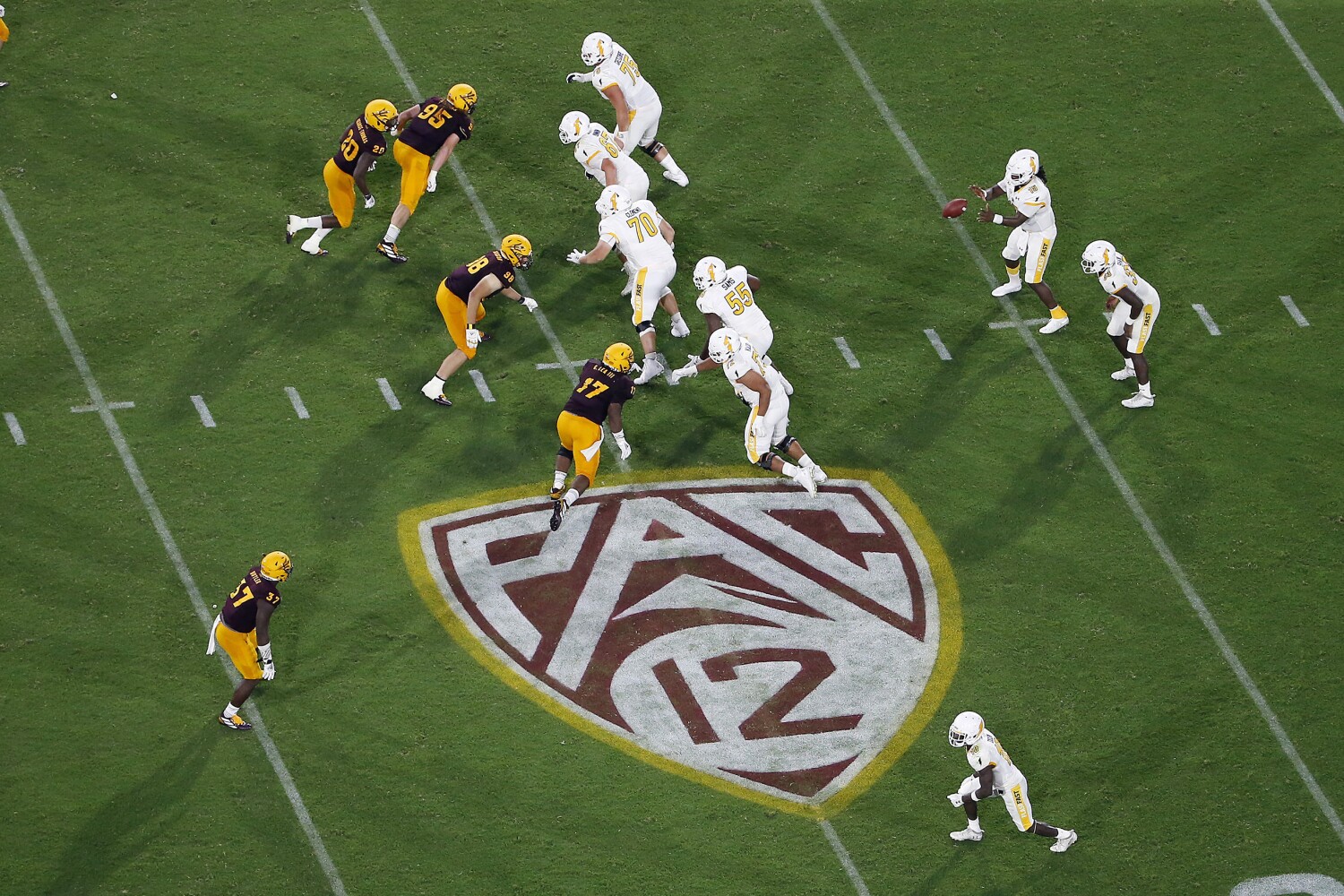 A group of Pac-12 Conference football players released a lengthy list of demands Sunday intended to protect and benefit them amid the COVID-19 pandemic and racial injustice that have roiled the country, threatening to boycott practices and games unless their requests are met.

The demands include health and safety protections, the elimination of what the players described as excessive salaries, an end to racial injustice in sports and society, guaranteed medical coverage, and a profit-sharing arrangement in which 50% of each sport’s conference revenue would be distributed evenly among athletes.

“Hundreds of Pac-12 football players throughout our conference are very concerned with the risks COVID-19 poses to our personal health and the health of our families and communities,” said a statement emailed to media outlets, including the Los Angeles Times, and signed by 12 players from nine teams, including UCLA defensive back Elisha Guidry.

“There’s not enough transparency about health risks, no uniformity to ensure we’re all safe when we play each other, and no adequate enforcement infrastructure. NCAA sports has truly failed us, it doesn’t enforce any health and safety standards. We believe a football season under these conditions would be reckless and put us at needless risk. We will not play until there is real change that is acceptable to us.”

The Players of the Pac-12 will opt-out of fall camp and game participation due to COVID-19 and other serious concerns unless the conference guarantees in writing to protect and benefit both scholarship athletes and walk-ons. #WeAreUnited https://t.co/KQ3oqdB5BL

It was not immediately clear how many players would be willing to participate in a boycott; one UCLA player told The Times on Saturday that the Bruins’ top players, while supportive of the movement, were eager to play in a season scheduled to start against USC on Sept 26.

A Pac-12 spokesman, asked to comment on the demands that were also part of an article posted on the Players’ Tribune, referred to a statement the conference released Saturday in which it said it supported its players using their voice while prioritizing their health and safety. Several Pac-12 players tweeted a list of statements outlining their objectives Sunday morning with the hashtag #WEAREUNITED.

Among the health and safety protections the players seek is a policy that would allow players to opt out of participating in sports during the pandemic without losing eligibility or their spot on the roster. Agreements that waive liability would be prohibited and mandatory safety standards instituted, including player-approved measures enforced by a third party selected by players “to address COVID-19 and serious injury, abuse and death.”

The players called for Pac-12 commissioner Larry Scott, school administrators and coaches to voluntarily and drastically reduce “excessive pay.” Scott, whose $5.3-million annual salary makes him the highest-paid college commissioner in the nation, recently agreed to take a 12% pay cut during the pandemic.

The players also asked that endowment funds be used to preserve all sports, noting that Stanford should reinstate the 11 sports programs it recently said it would cut by tapping into its $27.7-billion endowment.

A recent study released by the National College Players Assn. decried the racial exploitation of college athletes, estimating that the NCAA used amateurism to as an excuse to deny football and men’s basketball players roughly $10 billion in generational wealth over a four-year period. The study tabulated the four-year average value of a Pac-12 football player at $1.09 million.

As part of their efforts to end racial injustice in college sports and society, the players are asking for a civic engagement task force of student leaders and experts as well as university and conference administrators to address issues. They also want 2% of conference revenue to support financial aid for low-income Black students as well as the development of other community initiatives and other development programs for athletes on campus, and the creation of an annual Pac-12 Black College Athlete Summit that would include at least three athletes of the players’ choosing from each school.

To provide long-term coverage amid a pandemic that shows no sign of abating, the players are requesting medical insurance for sports-related conditions, including COVID-19 illness, for six years after their college eligibility expires.

The players also seek enhanced benefits regarding compensation, rights and freedoms, including the ability to secure representation and earn money for use of their name, image and likeness. They are requesting six-year athletic scholarships to assist with undergraduate and graduate degree completion and the elimination of policies that restrict or deter freedom of speech, their ability to participate in charity work or campus activities outside of athletic participation.

Finally, the players want athletes to be granted a one-time transfer without punishment as well as immediate unrestricted transfers in cases of abuse or serious negligence. They are demanding the ability to complete eligibility after participating in a professional draft if a player goes undrafted and forgoes pro participation within seven days of the draft.

The 12 players who attached their names to the demands stated their willingness to sit out games if needed to improve conditions for their counterparts across the conference. Players from every school except USC, Utah and Colorado were included in the demand letter.

“I love football,” Guidry said in the letter. “I love football so much that I am willing to give it up if things are not done right and we are not in a safe environment. Every player that puts on these pads to play this game is a person with their own family, own friends, own passions, and own purpose that is greater than football. We want to play the game we love and have given so much of ourselves to, but we want to do it in a safe way.”

Another UCLA player who spoke with The Times on Saturday said that Bruins coach Chip Kelly had communicated to players that he supported their calls for safety as well as their other demands.