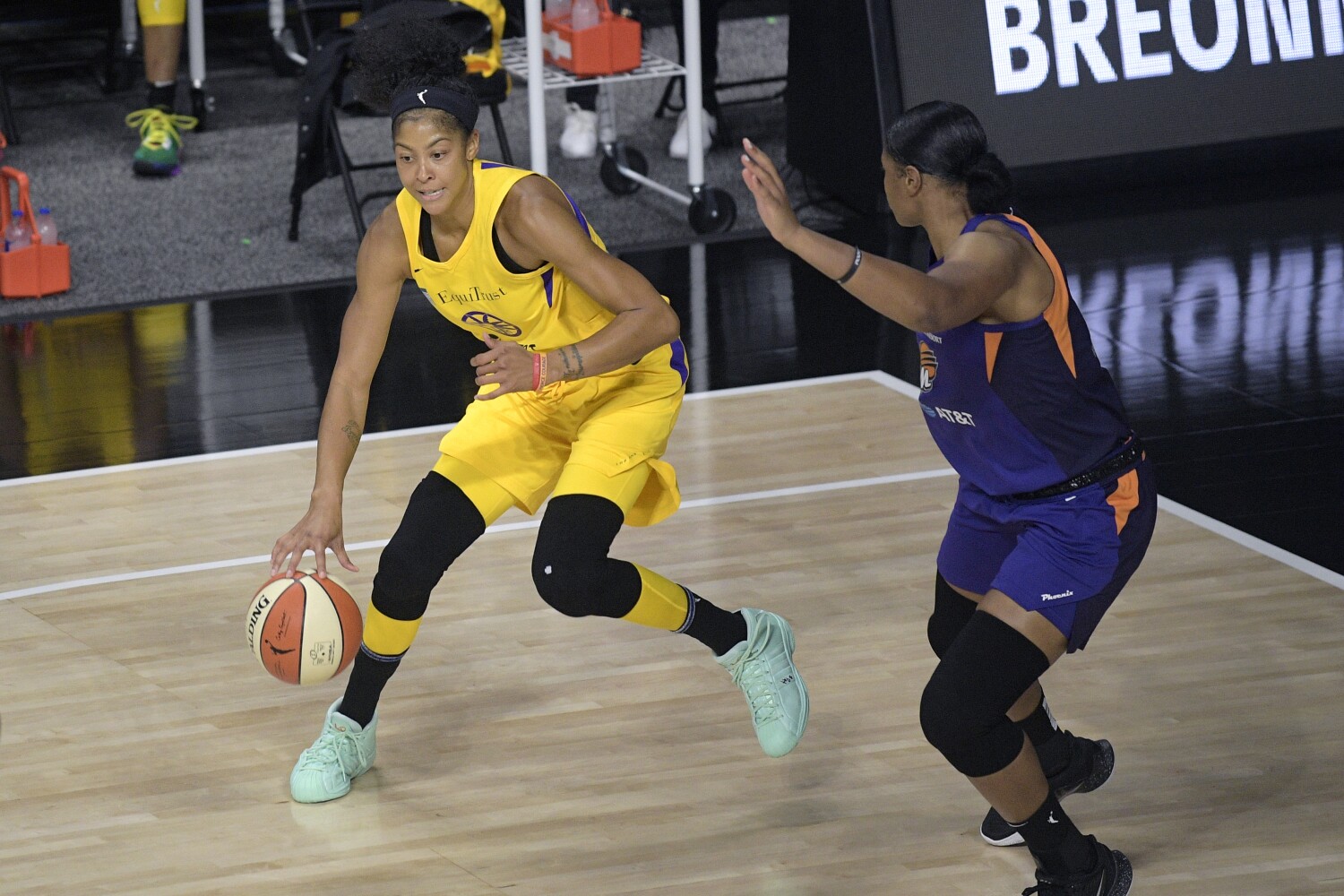 Hours before the Sparks opened their season Saturday, head coach Derek Fisher was asked how he would define success for the season opener against the Phoenix Mercury.

“Leaving out of here with all 12 players in one piece,” the coach said with a wry smile.

Health is the main priority in the WNBA bubble, not only in the face of a global pandemic, but also to weather a condensed regular season that will challenge players to rest and recover more efficiently. With championship aspirations hinging on the health of a veteran-laden team, Fisher is treating the 22-game schedule as a marathon.

“Every game counts, but we have a responsibility to our players not to put them in danger,” Fisher said before the Sparks’ 99-76 win in Bradenton, Fla., on Saturday.

Thanks to a dominant 30-8 third quarter, the Sparks cruised for most of the second half against the Mercury and kept all starters below 30 minutes. Forward Candace Parker, coming off an injury-riddled 2019 season, had 13 points and seven rebounds while playing 21 minutes. The veteran forward showed offensive skills off the dribble she couldn’t while injured last year, Fisher said. Parker also matched up defensively against Brittney Griner, who was held to eight points and nine rebounds.

“I saw health, most importantly from Candace,” Fisher said after the game. “I think she feels physically in a place where she can start to feel over the next few weeks and prepare herself to have a great season, I really do. … The success we hope to have this year, a lot of it revolves around Candace’s versatility on both ends.”

Parker said she entered training camp in better shape this season partly because of motivation from last year’s struggles, but also thanks to the coronavirus-prompted shutdown. She wasn’t traveling as an NBA analyst for TNT. She wasn’t out drinking with Charles Barkley either, she joked.

Now in her 13th year in the WNBA, the days of staying up until 3 a.m. and sleeping until noon are over for Parker. She knows she can’t get away with that anymore.

“I’ve been enlightened in my 30s,” the 34-year-old said during training camp. “I understand how important it is to get your sleep and your rest and my body needs it. I don’t recover as fast.”

With teams often playing on one day’s rest during the shortened regular season, quick recovery will be a challenge for the Sparks. They have veterans like Parker and 36-year-old Seimone Augustus, and lost experience and depth when Kristi Toliver and Chiney Ogwumike opted out.

Starting Tuesday against the Chicago Sky, the Sparks play three games in five days, with games against the Connecticut Sun on Thursday and the Seattle Storm on Saturday.

The fast and furious season came without league-scheduled scrimmages and after a shortened training camp. Handling the quick acceleration is a matter of slow and steady, Augustus said. The former Minnesota Lynx star who played just 12 games last year after knee surgery was on a carefully planned schedule when the Sparks arrived in Bradenton — practice for three days, rest for one.

The strategy paid off Saturday as Augustus scored 14 points on six-of-six shooting in 18 minutes off the bench during her Sparks debut. Earlier in the day, a friend sent Augustus a text reminding her that any day in which she gets to do what she loves is a good one. Amen, Augustus thought, considering last season’s struggles.
“I’m just happy that I’m out here,” she said. “I’m healthy, I’m having fun.”

As the season progresses, Fisher said the team and staff must “develop a level of mental discipline” so they can manage minutes for key players each game. The pressure to win every game may mount, but the ultimate desire to win a championship will still reign.

“There’s going to be nights where it’s tempting to stretch out our starters into the mid-30s or low-30s to try to win,” Fisher said. “But when you start looking at where we want to be in mid-September, we’re going to have to be smart here early.”

Galaxy defeat rival LAFC 2-0 before no fans in L.A.

Baseball on July 4th? How this league pulled it off

Nico Naismith is bringing basketball back to L.A. one homemade hoop at a time