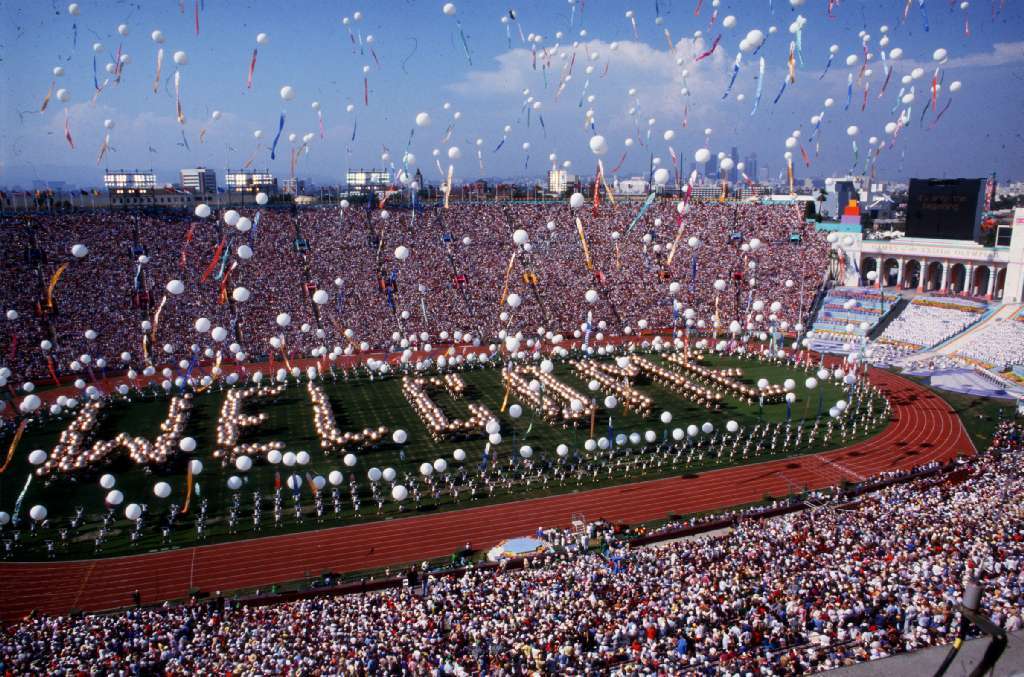 The Los Angeles Olympic Games were declared officially opened by President Ronald Reagan on this date in 1984, when athletes from 140 countries marched into the Coliseum to celebrate the Olympic festival and witness the lighting of the stadium’s torch.

After entering the stadium and running a lap on the track, torchbearer Gina Hemphill, 26-year-old granddaughter of Olympic great Jesse Owens, handed the flame that had traveled over 9,000 miles in a transcontinental relay, to Rafer Johnson, a gold medalist in the decathlon in the 1960 Games at Rome.

Johnson scaled the 99 steps at the stadium’s peristyle end and lit the flame through five large Olympic rings and into a cauldron atop the Coliseum.

1987 — Laura Davies of Great Britain rolls in long birdie putts on the 14th and 15th holes for a a one-under-par 71 to beat Ayako Okamoto of Japan and JoAnne Carner in an 18-hole, three-way playoff at the U.S. Women’s Open at Plainfield Country Club in Edison, N.J. The victory was Davies’ first on the U.S. tour and she finished three shots ahead of Okamoto and Carner.

1987 — Angel Cordero Jr., 44, becomes the fourth U.S. jockey to win 6,000 races when he rode Lost Kitty to victory at Monmouth Park in New Jersey. Cordero was victorious in both divisions of the Colleen Stakes for two-year old fillies. He guided Blue Jean Baby to an easy victory in the seventh race, then got the milestone 6,000th win when Lost Kitty beat Granny’s Portrait by a nose in the ninth.

1991 — On a Sunday afternoon at Dodger Stadium, Dennis Martinez of the Montreal Expos pitches the 13th perfect game in baseball history in beating the Dodgers 2-0. The win made Martinez, from Granada, Nicaragua, the first pitcher born outside the United States to throw a perfect game. Martinez struck out five batters as did Dodgers starter Mike Morgan, who also pitched a compete game, allowing four hits and no earned runs.

1994 — Two significant events occurred in baseball — Kenny Rogers of the Texas Rangers pitches a perfect game against the Angels at The Ballpark in Arlington, Texas, and the players’ union vote to go out on strike on Aug. 12. Rogers faced the minimum of 27 batters, striking out eight on 98 pitches. The work stoppage would be the eighth in baseball history, and it would be the longest — 232 days. Disagreements over salary caps and revenue sharing would cancel the rest of the regular season, the postseason and the World Series, and shorten the 1995 season to 144 games.

2000 — Blaine Wilson, America’s best gymnast, wins his fifth-straight gold medal at the U.S. Championships at St. Louis, the first to do so since George Wheeler accomplished the feat from 1937 to 1941. Wilson went virtually unchallenged at the meet when John Roethelisburger fell off the pommel horse and landed in fifth place; Jay Thornton, a prime candidate for the U.S. Olympic team, finished in 11th place, just barely qualifying for the Olympic trials; and Jason Gatlin, considered the second-best gymnast in the U.S., couldn’t overcome a nagging knee injury and finished in 18th place.

2009 — Germany’s Paul Biedermann beats Michael Phelps of the United States by a length when he set a world record in the 200-meter freestyle at the World Championships in Rome. It was Phelps’ first loss in a major international swim meet since Ian Crocker beat him in the finals of the 100-meter butterfly four years earlier at 2005 World Championships. Biederman swam in one minute, 42 seconds to top Phelps’ mark of 1:42.96 set at the Summer Games in Beijing.

2017 — The U.S. women claim a record fifth gold medal at the FINA Water Polo World Championships with a 13-6 victory over Spain at Budapest, Hungary. Kiley Neushul, the tournament’s most valuable player, scored four goals to lead Team USA to its second-straight world title.

Why David Arquette risked his life for pro wrestling dream

What to expect this week in the NBA: More testing, concerns