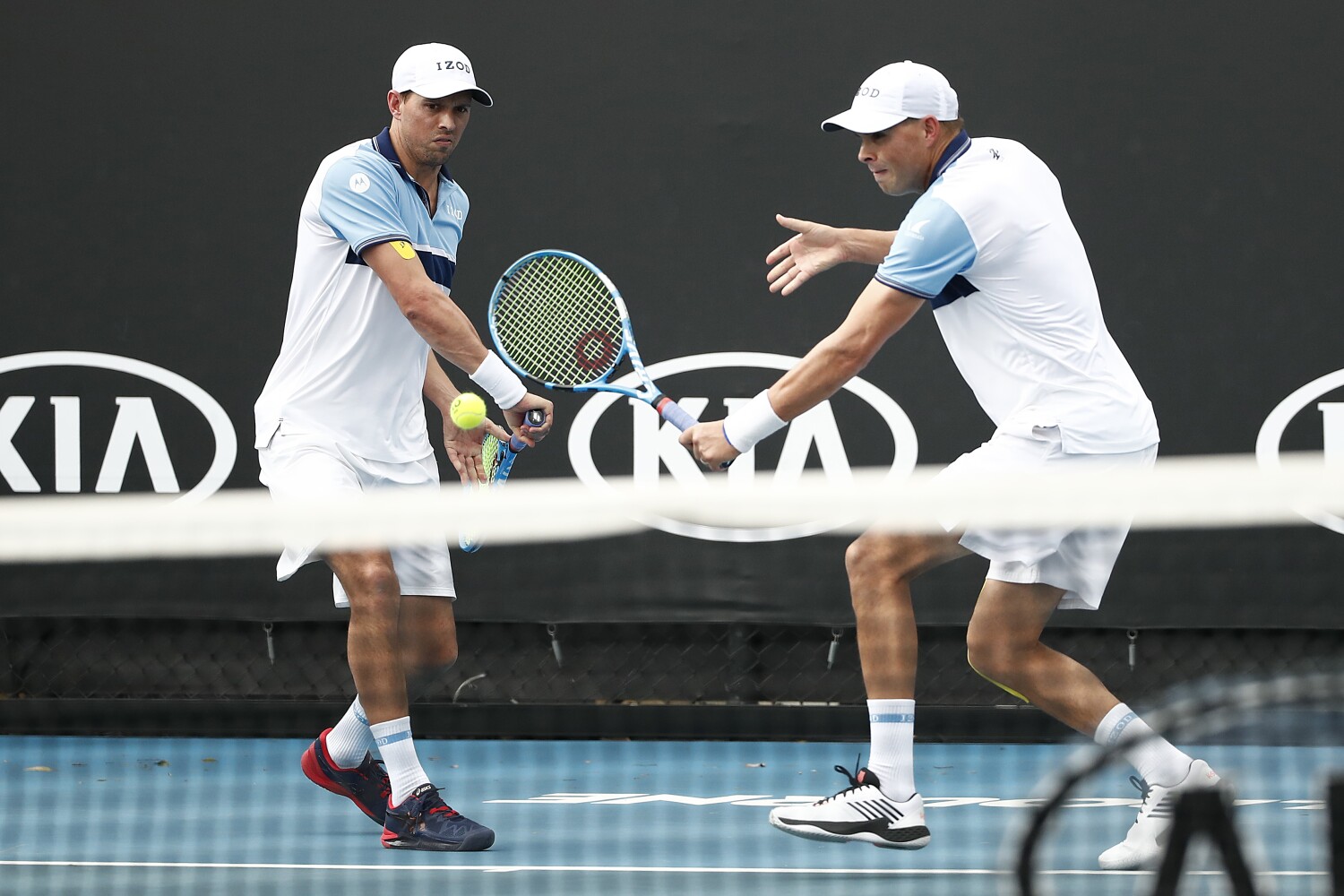 Bob Bryan and Mike Bryan, the twin brothers from Camarillo, won their record 62nd career doubles title on the ATP Tour on this date in 2010 when they beat Eric Butorac and Jean-Julien Rojer of Netherlands Antilles 6-7 (6), 6-2, 10-7 in the Farmers Classic at the Los Angeles Tennis Center.

The Bryans broke the mark held for nearly a decade by Todd Woodbridge and Mark Woodforde of Australia.

“Sixty-two, I’ll never forget that number,” Bob Bryan said. “It’s been an emotional ride talking about it for the last couple of months.”

Woodforde was on hand to congratulate the brothers during their post-match celebration.

“Well done. The Bryans and their father [Wayne] have been great for keeping doubles going,” Woodforde said.

Other memorable games and outstanding sports performances on Aug. 1 through the years:

1936 — Reich Chancellor Adolf Hitler presided over the opening of the Olympic Games in Berlin, with festivities in the new Berlin Olympic Stadium that included a flyover of the German airship Hindenburg flying the Olympic flag and musical fanfares by composer Richard Strauss. The Games were the first to be televised and radio broadcasts of the competition reached more than 40 countries. Jesse Owens won four gold medals in the sprints and long jump and the United States collected 56 medals overall, second to Germany’s 89.

1945 — Mel Ott, the player-manager of the New York Giants, hit his 500th career home run off Johnny Hutchings at the Polo Grounds in a 9-2 win over the Boston Braves. Ott became the first National League player to reach the milestone, joining American League sluggers Babe Ruth (714) and Jimmie Foxx (527). Ott, a 12-time All-Star, would end his 22-year career with 511 home runs.

1972 — Nate Colbert of the Padres hit five home runs and drove in 13 runs in San Diego’s doubleheader sweep of the Atlanta Braves, 9-0 and 11-7, at Atlanta Fulton County Stadium. In the first game, Colbert went four for five with two home runs and five RBIs. He followed it up with a three-for-four performance in the nightcap that featured three home runs and eight RBIs. Colbert’s five home runs in the doubleheader tied a record set by Stan Musial of the St. Louis Cardinals in 1954.

1987 — In a bout designed to unify the heavyweight division, Mike Tyson, the World Boxing Assn. and World Boxing Council champion, won a 12-round unanimous decision over International Boxing Federation champion Tony Tucker in Las Vegas. Tucker fought aggressively in the early rounds but Tyson found his rhythm midway in the fight to stock up enough points to be the first undisputed heavyweight champion since Leon Spinks in 1978.

1994 — Cal Ripken Jr. closed in on Lou Gehrig’s all-time record of 2,130 consecutive games when he played in his 2,000th straight in the Baltimore Orioles’ 1-0 win over the Minnesota Twins at the Metrodome in Minneapolis. Ripken got a standing ovation from a crowd of 27,712 when he came to bat in the first inning after it was announced that he was playing in No. 2,000. Ripken’s streak started on May 30, 1982, when he was a rookie third baseman and he would pass Gehrig on Sept. 6, 1995, when he took the field for his 2,131st.

2004 — Karen Stupples of Britain started her final round at the Women’s British Open with an eagle and double-eagle on the first two holes and it sent her cruising to a five-stroke victory on the Old Course at Sunningdale, England. It was Stupples’ first major tournament win and she did it by shooting a record-tying 19-under-par 269 that equaled the low score for a major championship set by Dottie Pepper at the 1999 Nabisco Dinah Shore in Rancho Mirage.

2009 — Rachel Alexandra won the $1.25-million Haskell Invitational at Monmouth Park Racetrack in Oceanport, N.J., that established her as one of the great fillies in thoroughbred racing. The 3-year old bay filly, ridden by Calvin Borel, beat Belmont Stakes winner Summer Bird by six lengths in the mile and one-eighth race in one minute, 47.21 seconds. The time was just two-fifths of a second slower than the track record set 24 years earlier by Kentucky Derby winner Spend A Buck.

2010 — Stuart Appleby of Australia joined one of golf’s exclusive clubs when he became the fifth player on the PGA Tour to shoot a 59 at the Greenbrier Classic at White Sulphur Springs, W. Va. Appleby’s 11-under-par effort helped him beat third-round leader Jeff Overton by one stroke after Overton’s birdie putt slid by the hole on the par-three 72nd hole.

2012 — Four teams were kicked out of the women’s badminton doubles tournament at the London Olympic Games for trying to lose on purpose. The eight doubles players from China, South Korea and Indonesia were cited by the Badminton World Federation for “conducting oneself in a manner that is clearly abusive or detrimental to the sport” during their play at Wembley Arena.

Quarterback-receiver chemistry will be a challenge for Chargers