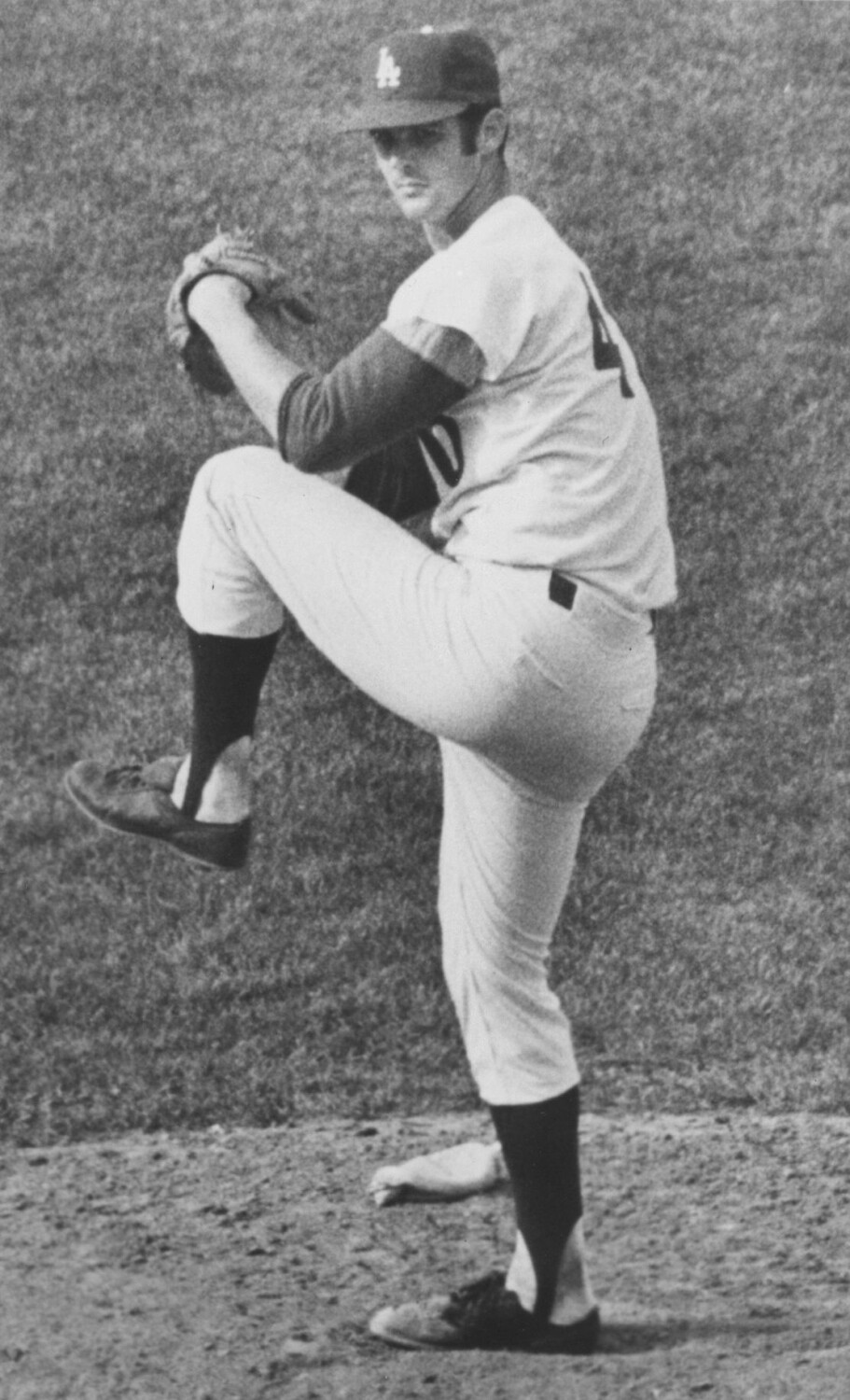 Dodgers pitcher Bill Singer, who 10 weeks earlier was hospitalized with hepatitis, pitches a no-hitter on this date in 1970 to beat the Philadelphia Phillies 5-0 before a daytime crowd of 12,454 at Dodger Stadium.

As the Dodgers mob the tall right-hander after he gets Byron Browne to foul a popup to catcher Jeff Torborg, Dr. Robert Woods, who treated Singer back to good health, can only shake his head and say, “It’s a miracle.”

It is the first no-hitter for the Dodgers since Sandy Koufax’s perfect game against the Chicago Cubs in 1965, which also was caught by Torborg. Singer strikes out 10 and walks none to improve his record to 7-3.

Singer, who had been activated from the disabled list June 14, said afterward: “I am so happy I could cry. The tears are there.”

Here is a look at other memorable games and outstanding sports performances on this date:

1958 — The PGA Championship makes the transition from match-play format to stroke play and Dow Finsterwald beats Billy Casper by two shots at Llanerch Country Club in Havertown, Pa., 11 miles outside Philadelphia. Finsterwald, a native of Athens, Ohio, who was runner-up in the 1957 PGA Championship to Lionel Hebert 2 and 1, shoots a 67 in the final round on the par-70 course, including a 31 on the front nine, for his only major title.

1958 — The Detroit Tigers’ Jim Bunning, a lanky 26-year-old right-hander from Southgate, Ky., throws the first of his two no-hitters when he beats the Boston Red Sox 3-0 in the first game of a doubleheader at Fenway Park. Bunning strikes out 12, walks two and hits Jackie Jensen twice with pitches. In 1964, Bunning would pitch his second no-hitter, a perfect game against the New York Mets that makes him one of just five pitchers to throw no-hitters in the American and National leagues.

1963 — Mary Mills wins the first of her three major championships when she beats Sandra Haynie and Louise Suggs by three strokes in the U.S. Women’s Open at the Kenwood Country Club outside Cincinnati. Mills, 23, fires an even-par 73 in the final round for a 72-hole total of 289. Retired tennis pro Althea Gibson is the first Black to play in a U.S. Women’s Open when she shoots a 14-over-par 160 in the first two rounds and misses the cut by a stroke.

1974 — The filly Chris Evert, named after the tennis star who is cheering from the rail, wins match point when the three-year old beats Miss Musket by 50 lengths in a $350,000, winner-take-all race at Hollywood Park. The final margin is the result of jockey Laffit Pincay Jr.’s decision not to push Miss Musket after she is decisively beaten with a half-mile to go in the 1¼-mile event. The money is put up in part by the horses’ owners — Aaron Jones challenges Carl Rosen, owner of Chris Evert, at $100,000 each — and Hollywood Park covers the balance of $150,000.

1976 — Hank Aaron hits the 755th and final home run of his Half of Fame career to help the Brewers to a 6-2 win over the Angels before a pint-sized crowd of 10,134 at County Stadium in Milwaukee. Aaron’s clout to left field comes in the seventh inning with two out off Dick Drago.

1997 — Justin Leonard, 25, from Texas, closes with a 65 to win the British Open at 12-under 272 at Royal Troon Golf Club in Troon, Scotland. Leonard, whose final round is one of the best ever in a major championship, takes the lead from Jesper Parnevik with a birdie on No. 17. Leonard starts the day trailing by five shots but makes six birdies on the front nine and goes on to win by three shots over Darren Clarke and Parnevik, who led after 54 holes.

2009 — Lauren Lappin, a Stanford graduate and 2008 Olympian, hits her first home run of the season to start a three-run rally in the third inning, and the United States goes on to beat Australia 3-1 in the World Cup of Softball championship game in Oklahoma City. Cat Osterman relieves Team USA starter Monica Abbott, who allows just one run in 5 2/3 innings. Australia has the go-head run at the plate, but Osterman gets Kylie Cronk to line out to end the game.

2010 — One day after Ilya Kovalchuk agrees to a shocking 17-year, $102-million contract with the New Jersey Devils, the NHL rejects the deal, ruling the heavily front-loaded structure is an attempt to circumvent the league’s salary cap and minimize its average annual value. Kovalchuk, a 27-year-old left wing who is also pursued by the Kings, is to be paid $95 million through the first 10 seasons.

2015 — Zach Johnson rolls in a 25-foot birdie putt on the 72nd green at the Old Course at St. Andrews in Scotland, and then makes two birdies in a four-hole playoff with Louis Oosthuizen and Marc Leishman to win the British Open. Jordan Spieth, looking to win his third straight major tournament, falls one shot short of joining the trio when he misses an eight-foot putt on the 72nd hole.

Lakers, Clippers have most to lose if NBA season is halted