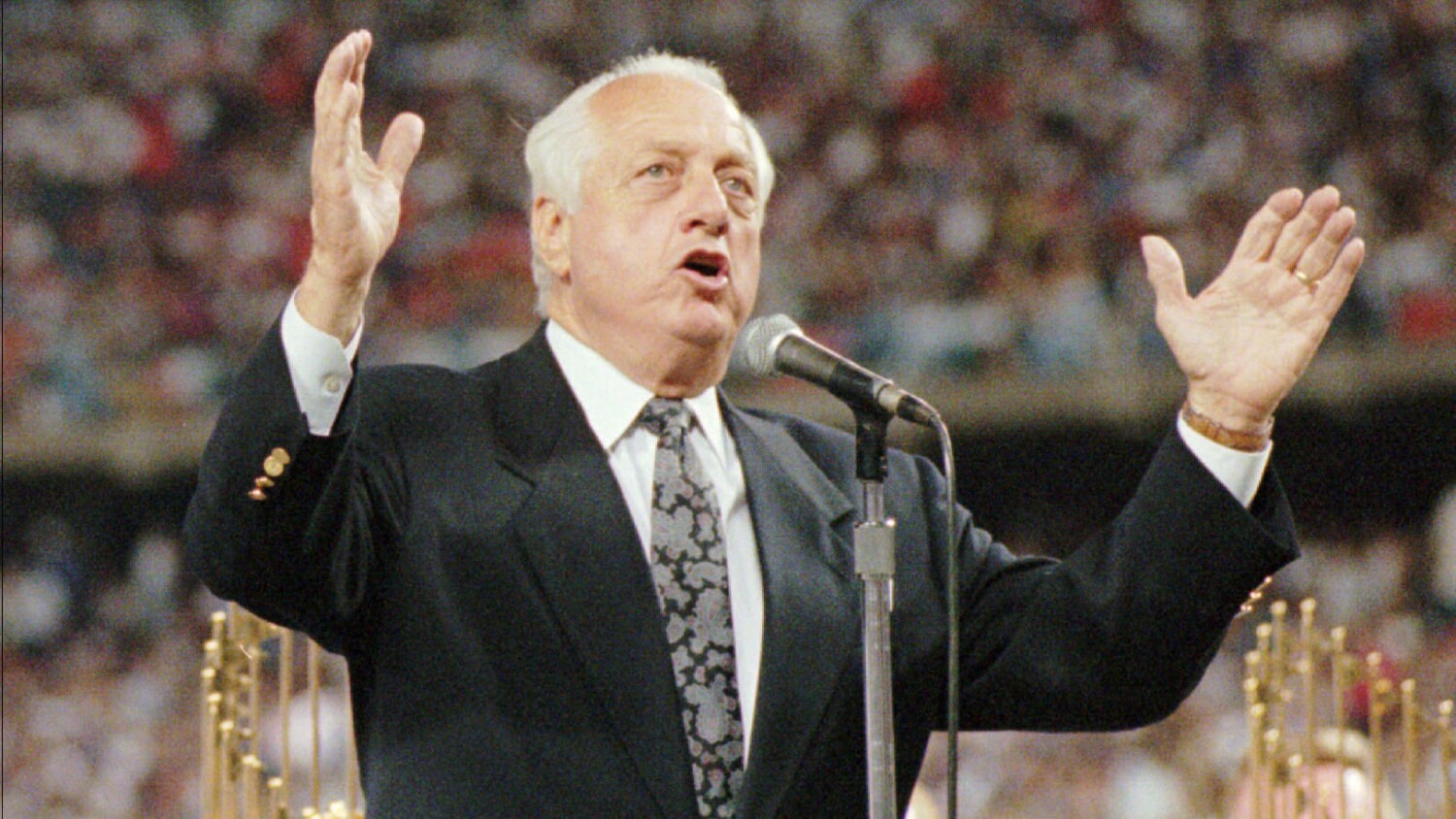 Tommy Lasorda bid a tearful farewell in an emotional speech to fans at Dodger Stadium on this date in 1996 when he officially gave way as manager to former shortstop and coach Bill Russell, who had taken over as “interim” manager 30 games earlier on June 25.

Lasorda, who announced his retirement after he was hospitalized with a heart attack, met with the Dodgers players in the clubhouse before the game with the visiting Florida Marlins.

“It was very emotional, very hard for me,” Lasorda said. “I told them how much I loved them. How much I appreciated what they had done for me. But I had to walk out before I started to cry.”

1932 — Athletes from 37 nations assemble at the Coliseum to open the Games of the X Olympiad in Los Angeles. The Olympics included the first residential villages — the men were housed in Baldwin Hills and the women stayed at the Chapman Park Hotel on Wilshire Blvd. Babe Didrikson won gold medals in the javelin and hurdles, and a silver in the high jump.

1947 — Ewell Blackwell’s 16-game winning streak is snapped when the New York Giants beat him and the Cincinnati Reds 5-4 in 10 innings. During the streak, Blackwell, nicknamed “The Whip,” completed every game and threw five shutouts, including a no-hitter against the Boston Braves on June 18 at Crosley Field.

1959 — Rookie first baseman Willie McCovey breaks into the big leagues going four-for-four in his first game with the San Francisco Giants, a 7-2 win against the Philadelphia Phillies at Seals Stadium. McCovey, who would go on to be named the National League’s rookie of the year, singled in his first at-bat against future Hall of Fame pitcher Robin Roberts, and he also collected two triples.

1961 — Jerry Barber, 45, edges Don January by one stroke in an 18-hole playoff to win the PGA Championship at Olympia Fields Country Club in suburban Chicago. Barber, one of the great putters on the current PGA Tour, sank a 52-foot putt on the 72nd hole in regulation to tie January, who had bogeyed the hole. The next day Barber shot a 67 for the one-shot victory.

1976 — Bruce Jenner, now known as Caitlyn Jenner, sets the world record in the Olympic decathlon at the Montreal Games when he scored 8,618 points that broke the Soviet Union’s Nikolai Avilov’s mark by 164 points. After five events, Jenner trailed by 150 points but good performances in the 110-meter hurdles, the discus, javelin, pole vault and a win in the 1,500 meters sealed the gold medal that gave him the unofficial title of “world’s greatest athlete.”

2004 — Yelena Isinbayeva of Russia breaks the women’s pole vault world record for the third time in five weeks clearing 16 feet, 0-3/4 inches at a meet in London. A month later at the Summer Olympics in Athens, Greece, the 22-year-old would win a gold medal when she set a new world record with a vault of 16-1¼.

2012 — In a nine-run sixth inning, switch-hitter Kendrys Morales homers from both sides of the plate to help the Angels beat the Rangers 15-8 at Arlington, Texas. Morales’ second blast was a grand slam and he became the third switch-hitter in big league history to hit home runs left-handed and right-handed in the same inning. Carlos Baerga of the Cleveland Indians did it in 1993, followed by Mark Bellhorn of the Chicago Cubs in 2002.

2013 — Katie Ledecky, 16, obliterates the world record in the 1,500-meter freestyle by six seconds to win her second gold medal at the FINA World Championships in Barcelona. Ledecky swam in 15:36.53 to beat American Kate Ziegler’s 15:42.54 mark set in 2007. Lotte Friis of Denmark touched the wall in second place about two seconds behind Ledecky, and Lauren Boyle of New Zealand finished third.