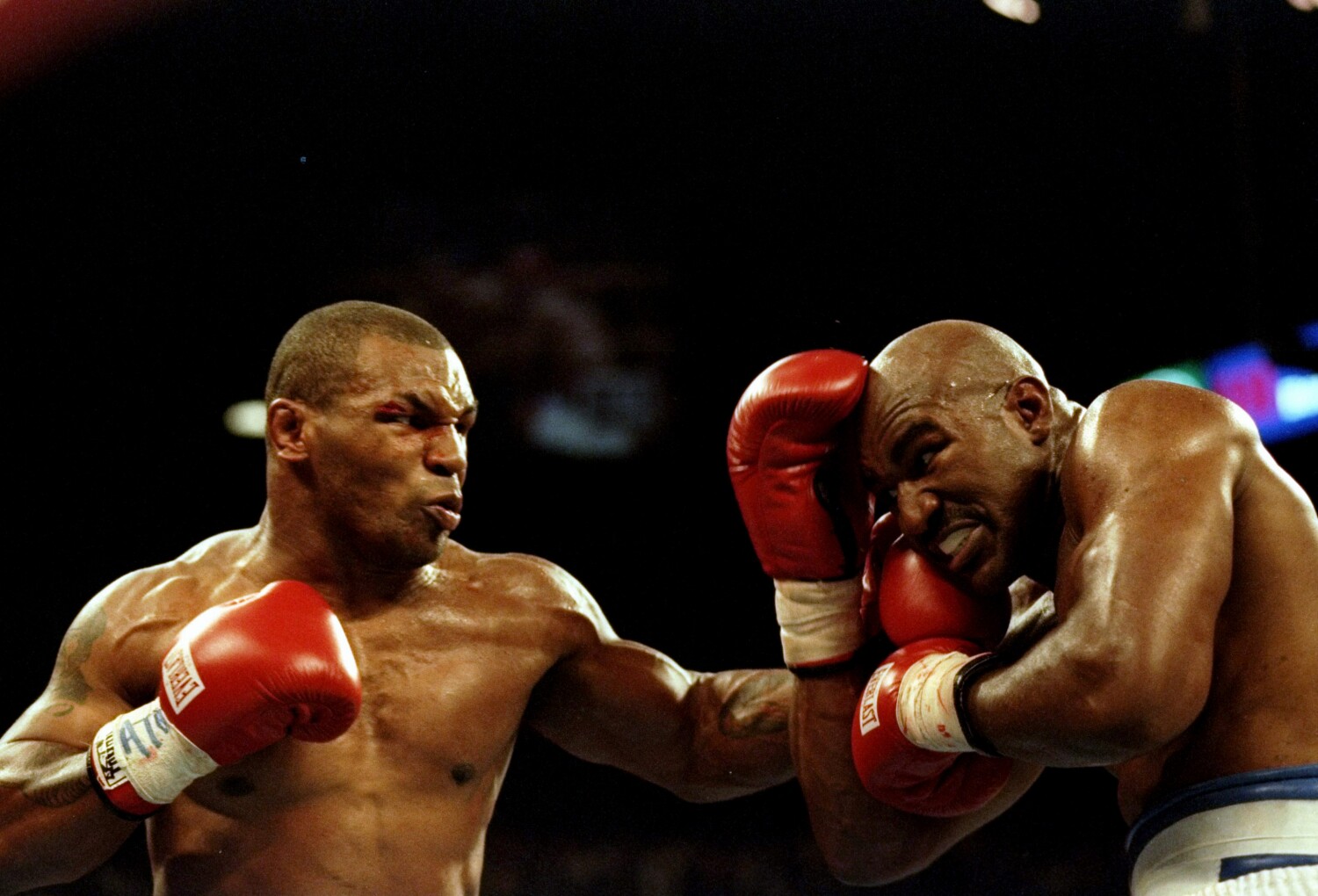 Mike Tyson was disqualified and his $30-million purse withheld on this date in 1997 when he spit out his mouthpiece and bit champion Evander Holyfield in the ear twice in the third round of their World Boxing Assn. heavyweight title fight in Las Vegas.

The first bite took a chunk out of Holyfield’s right ear during a clinch, and the second bite, to the left ear and coming just 23 seconds later, caused referee Mills Lane to disqualify the challenger.

Times columnist Jim Murray noted: “We’ve heard of a ‘hungry’ fighter. But never one who tried to eat his opponent.”

The Dodgers were scheduled to conclude a three-game series Sunday with an afternoon game against the Giants in San Francisco. The Angels also were set for a day game against the Blue Jays in Toronto. Both games were postponed by the COVID-19 pandemic.

Here is a look at other memorable games and outstanding sports performances on this date:

1953 — Betsy Rawls wins the U.S. Women’s Open at the Country Club of Rochester in New York with a six-stroke playoff victory over Jackie Pung. In the playoff round, Rawls fires a 71 to Pung’s 77 for the third of her eight major championships. It is the first U.S. Women’s Open overseen by the U.S. Golf Assn.

1971 — Muhammad Ali wins a four-year legal battle to overturn his 1967 conviction for draft evasion in an 8-0 vote by the U.S. Supreme Court. Ali is convicted by a jury in Houston and sentenced to five years in prison but remains free on bail. Justice Thurgood Marshall abstains from the vote.

1992 — Connie Price-Smith, who earlier is victorious in the discus, wins the shot put with a throw of 62 feet 6 inches to become the first woman to win both events at the U.S. Olympic trials since Earlene Brown in 1960.

1994 — Forward Oleg Salenko scores a World Cup-record five goals when Russia beats Cameroon 6-1 at Stanford Stadium in Palo Alto. Salenko scores three goals in the first half and two more midway through the second. Cameroon’s goal is scored by Roger Milla, who at 42 becomes the oldest player to find the net in a World Cup match.

2007 — Craig Biggio becomes the 27th player in big league history to get 3,000 hits, reaching the mark in the Houston Astros’ 8-5, 11-inning win over the visiting Colorado Rockies. Biggio goes five for five, and his single in the seventh inning off Aaron Cook gives him the milestone.

2009 — Mariano Rivera records his 500th save, becoming the second relief pitcher to reach the mark, when the New York Yankees beat the New York Mets 4-2 in an interleague game at Citi Field. Rivera gets the final four outs of the game to join Trevor Hoffman, the first member of the 500-save club.

2009 — Joey Logano, 19, becomes the youngest winning driver in the history of the NASCAR Cup Series when he finishes first in the rain-shortened Lenox Industrial Tools 301 at New Hampshire Motor Speedway in Loudon. Logano lowers the age record set by Kyle Busch, who first won when he was 20 years old.

2012 — Kentucky is the first school to have players selected one-two in the NBA draft when New Orleans takes forward Anthony Davis with the No. 1 pick. Charlotte follows by selecting fellow freshman Michael Kidd-Gilchrist. The Wildcats join Nevada Las Vegas with six players drafted. The Runnin’ Rebels had six players selected in 1977 — but none in the first round.

2014 — Swedish stallion Sebastian K, driven by trainer Ake Svanstedt, trots the fastest mile in harness racing history when he finishes in 1:49 in the $100,000 Sun Invitational for older trotters at Pocono Downs in Wilkes-Barre, Pa. The eight-year-old Sebastian K breaks the record of 1:49.3 set by Enough Talk in 2008.

One year after his death, Tyler Skaggs continues to inspire