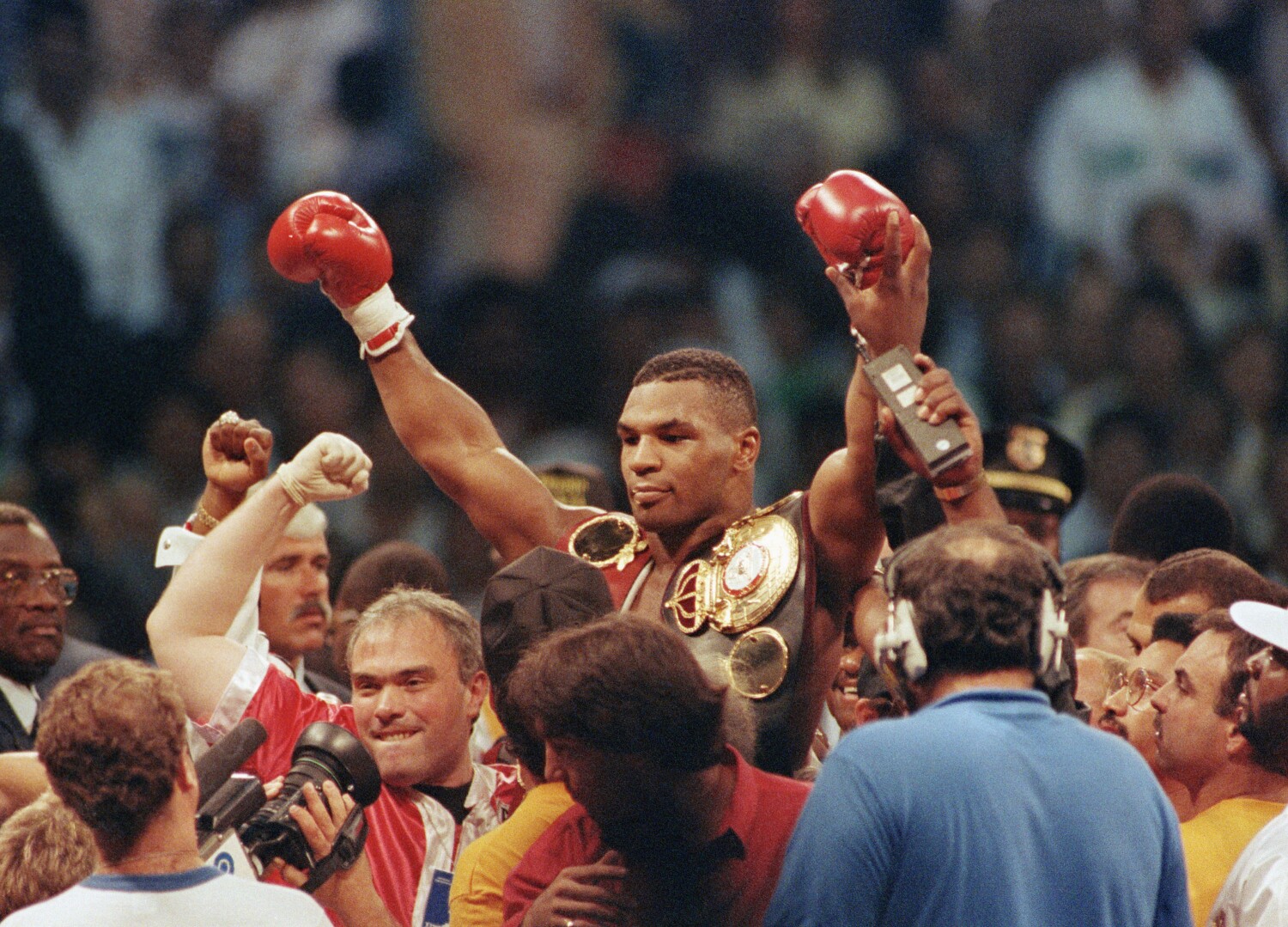 Mike Tyson stopped challenger Carl “The Truth” Williams in 93 seconds on this date in 1989 with a left hook to the jaw in the first round at Atlantic City’s Convention Hall in New Jersey to retain his heavyweight title.

Referee and former boxer Randy Neumann stopped the fight after Williams got back on his feet at the count of six. When Neumann raised his arms to signal the bout was over, he was met with a chorus of boos and jeers from the crowd of more than 11,000 that cascaded throughout the Hall and down to the ring.

“I had a 10-second judgment to make and he [Williams] could not answer a simple question,” Neumann said. “That, plus the look in his eyes, told me he was not in very good shape.”

In June 1988 in the same building, Tyson had knocked out Michael Spinks in 1:31 of the first round.

1956 — Brooks Lawrence of the Cincinnati Reds has his 13-game winning streak snapped at Crosley Field when Roberto Clemente hit a three-run home run in the ninth inning to lead the Pittsburgh Pirates to a 4-3 victory. Lawrence finishes the game but ends up losing to Pittsburgh’s relief ace Elroy Face. Lawrence would go on to win 19 games in the season.

1968 — Arnold Palmer tops $1 million in earnings, the first PGA golfer to reach the seven-figure dollar mark, even though he loses to Julius Boros by a stroke at the PGA Championship at Pecan Valley Club in San Antonio. The victory makes Boros, 48, the oldest player to win a major tournament. Palmer had a chance to catch Boros on the 72nd hole but missed an eight-foot putt that left him tied with Bob Charles for second place.

1975 — Joe Torre of the New York Mets grounds into a National League-record four straight double plays during a 6-2 loss to the Houston Astros at Shea Stadium. Felix Millan, who batted ahead of Torre in the lineup, had four singles but was erased each time Torre faced Ken Forsch of the Astros.

1979 — Spain’s Seve Ballesteros, 22, wins the first of his five major championships when he beats Ben Crenshaw and Jack Nicklaus by three strokes in the British Open at Royal Lytham and St. Annes Golf Club in Lancashire, England. On the 16th fairway, Ballesteros deliberately hits his ball into an area for parked cars so he would have an easier shot to the green. A perfect sand wedge and 30-foot putt gives him a three-shot lead with two holes to play.

1985 — John Henry, the greatest money winner in horse racing history, is forced to retire because of a tendon injury after he was scratched from the Vernon Underwood Handicap at Hollywood Park. The 10-year-old gelding, who won 39 races in 83 starts, earned nearly $6.6 million in purses. John Henry won the inaugural Arlington Million at Arlington Park outside Chicago in 1981 with Bill Shoemaker in the saddle, and again in 1984 with Chris McCarron in the irons.

2001 — In their highest-scoring game in 58 years, the Dodgers rout Colorado 22-7 at Coors Field in Denver. Gary Sheffield hits two home runs and Shawn Green and Paul Lo Duca add solo blasts. The Dodgers scoring includes five runs in the first inning, six in the sixth and nine in the eighth. The 22 runs is the most scored by the Dodgers since they beat the Pittsburgh Pirates 23-6 on July 10, 1943, at Ebbets Field.

2013 — Phil Mickelson wins his first British Open, this one at Muirfield in Gullane, Scotland, where he shot a final round five-under par 66 that included four birdies in the last six holes. It was his best round of the tournament and adds the Claret Jug to his four other major championships.

2018 — Jerry Bozzo, 97, extends his record for being the oldest trainer to win a thoroughbred race when he sends Gusty Wind to the post in the fifth race at Gulfstream Park in Hallandale Beach, Fla. Gusty Wind, ridden by jockey Luca Panici, wins by four lengths in a mild upset and pays $14.80.

2018 — Josef Martinez sets a Major League Soccer record when he scores his sixth career hat trick in a match in which Atlanta United rallies to beat D.C. United 3-1 at Mercedes-Benz Stadium in Atlanta. Martinez had shared the mark of five hat tricks with Stern John and Diego Serna.