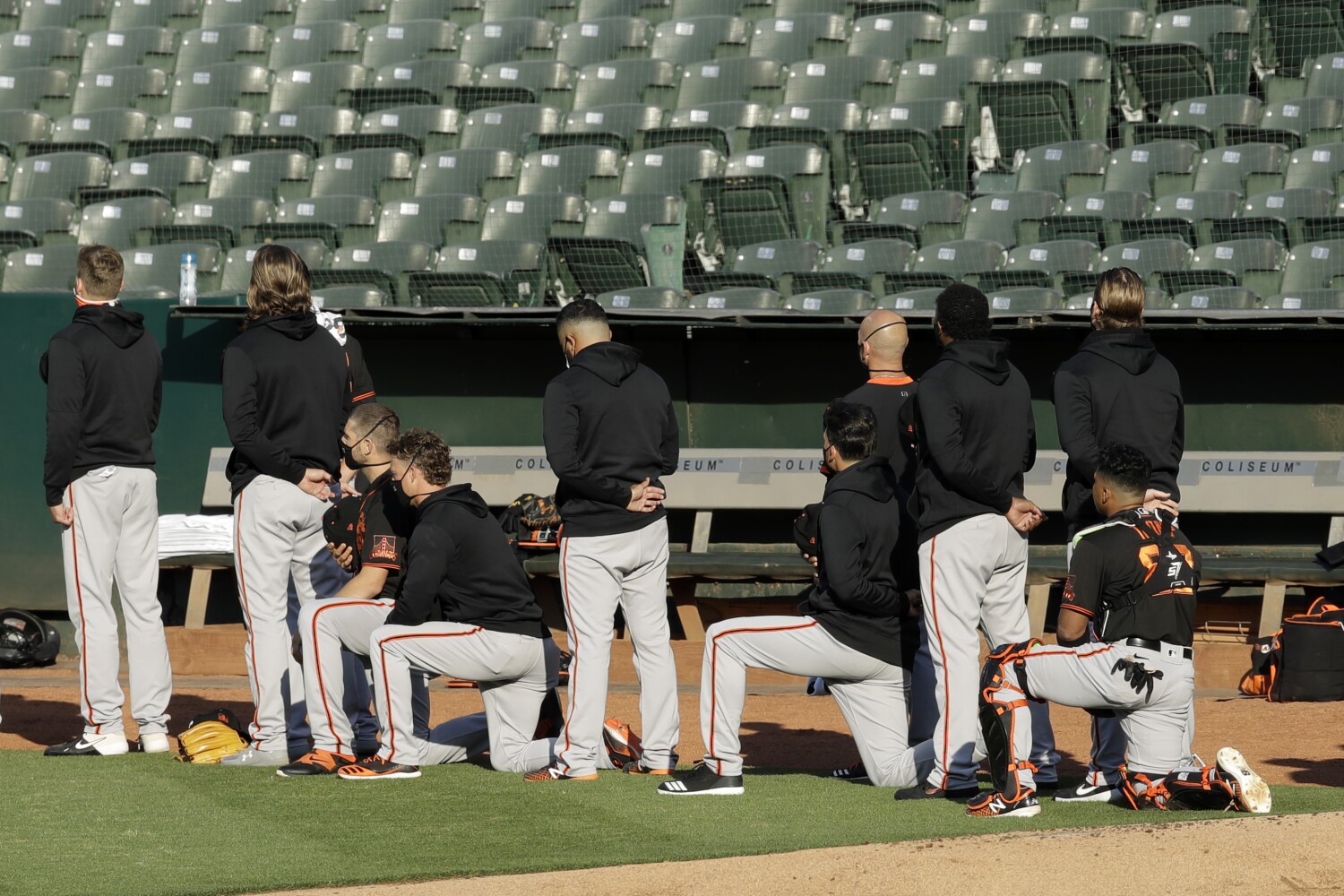 San Francisco Giants manager Gabe Kapler and several of his players took a knee during the national anthem Monday before a preseason game in Oakland as a protest against police brutality. So did Angels reliever Keynan Middleton before his team’s game in San Diego.

While the moves were praised by Major League Baseball and others, some people were unhappy with the demonstrations.

Not surprisingly, President Trump belongs to the latter group.

Trump, a longtime critic of such protests, tweeted Tuesday morning: “Looking forward to live sports, but any time I witness a player kneeling during the National Anthem, a sign of great disrespect for our Country and our Flag, the game is over for me!”

The hashtag #BoycottMLB was also trending on Twitter the day after Kapler, Middleton and others offered a preview of what might be a more common occurrence around the MLB and sports in general in the aftermath of the death of George Floyd.

Giants right fielder Jaylin Davis and first base coach Antoan Richardson were among those who joined Kapler in taking a knee during the anthem. Shortstop Brandon Crawford stood between Davis and Richardson with a hand on each of their shoulders. The MLB tweeted video of the protest, along with the hashtag #BlackLivesMatter.

When a Twitter user responded that the actions by Kapler and the others were disrespectful toward the military, the MLB account replied: “It has never been about the military or the flag. The players and coaches are using their platforms to peacefully protest.”

It has never been about the military or the flag. The players and coaches are using their platforms to peacefully protest.

Kapler said the Giants’ players and coaches had engaged in many discussions involving the anthem in the days leading up to Monday’s game.

“I wanted to demonstrate my dissatisfaction with our clear systemic racism in our country and I wanted them to know that they’ve got to make their own decisions and we would respect and support those decisions,” Kapler said after the game. “I wanted them to feel safe in speaking up.”

Giants president Farhan Zaidi said in a statement: “We support those who knelt to peacefully protest racial injustice and those who stood to express love of country. We do not see these as mutually exclusive sentiments and believe the freedom to express both is what our country is about.”

Middleton tweeted a statement Tuesday morning, saying he has “the utmost respect for all the brave men and women that serve this country.”

But he wrote: “We must all take this fight against racial injustice seriously. Until things start to change in this country and my brothers and sisters don’t have to live in fear, I will be using my platform to implement change.”

He added, “Through this, I strive to be a voice of unity.”

In 2017, Trump rallied his supporters by criticizing players who did not stand during the national anthem. At one point, he challenged NFL owners to fire any player who protested in such a manner. The president signaled last month he was ready for another battle on that front during the protests and unrest that followed Floyd’s death.

“There are other things you can protest, but not our Great American Flag — NO KNEELING!” Trump said in one of multiple tweets on the topic in June.

Kings and Ducks are done; Staples Center may host playoffs