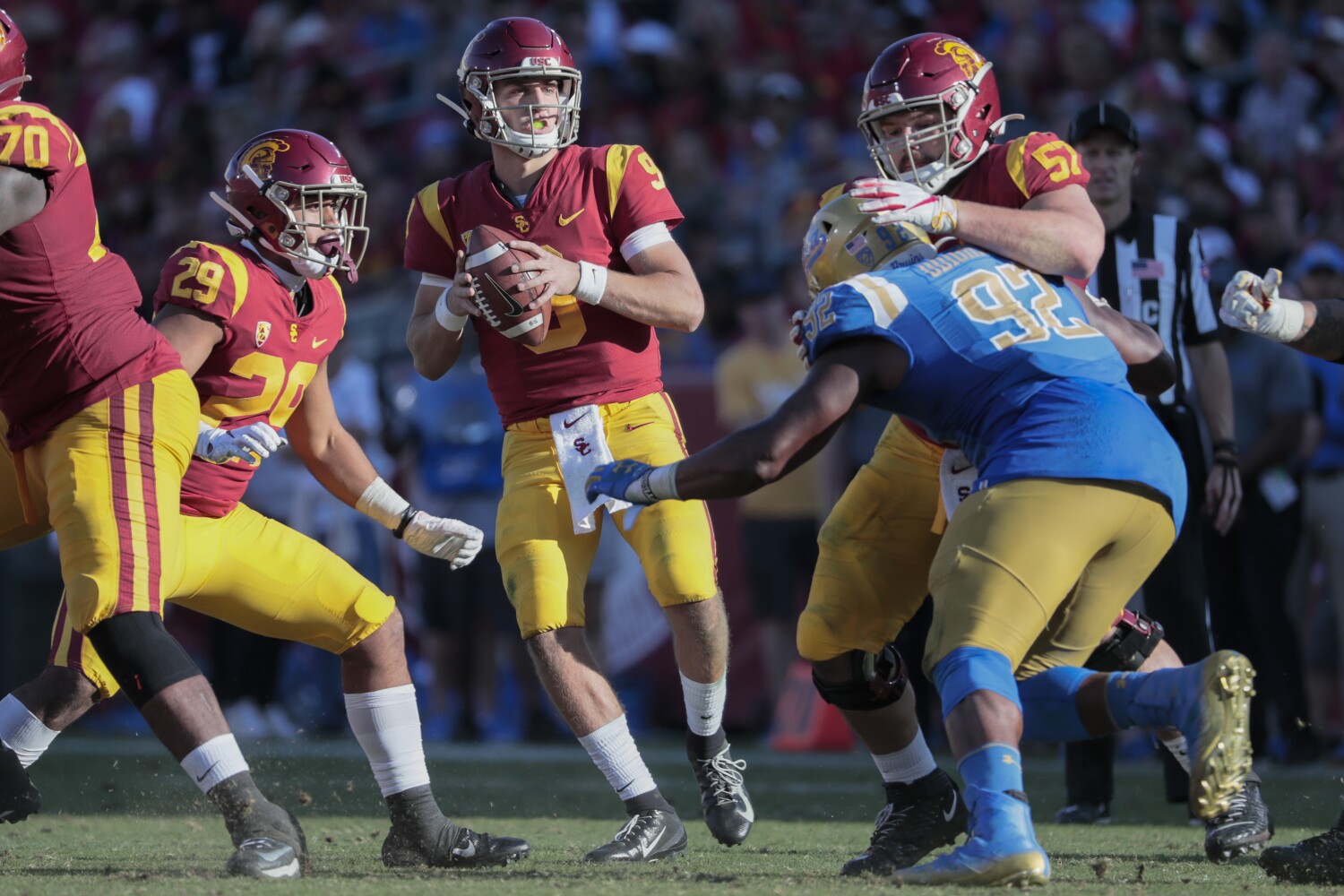 The dates remain tentative. The schedule remains fluid. But on Friday, with the fate of college football season still up in the air, the Pac-12 became the first major conference to put forth a concrete plan for how its 10-game, conference-only season could play out. If it’s played at all.

The Pac-12 is slated to begin its season Sept. 26, with the crosstown rivalry between USC and UCLA at the Rose Bowl set for top billing on a tentative opening weekend. If all goes as planned, the Pac-12 will play its title game Dec. 19, on a campus site, not at Allegiant Stadium in Las Vegas.

But the conference’s announcement came with a number of caveats on account of COVID-19, many of which could impact both teams in Southern California. Neither USC nor UCLA has received clearance from public health officials to even hit tackling dummies, let alone each other, and with COVID-19 cases still rising in Los Angeles County, it’s unclear whether either will receive word by Aug. 17 when the Pac-12 allows training camp to begin.

Pac-12 Commissioner Larry Scott said Friday he expects all of the conference’s programs to be able to open the season by Sept. 26; though, he acknowledged several member schools still needed approval to go forward.

In a joint statement, USC athletic director Mike Bohn and UCLA athletic director Martin Jarmond noted the possibility that the rivalry game could be pushed to either Oct. 31 or Dec. 12, which are open dates on both teams’ schedules.

“We understand the great interest in the 90th edition of our historic football rivalry game,” the statement read. “Though we are progressing toward the start of our respective seasons, at this time we do not have the necessary county and state clearances to begin competitions. Developing a scheduling model for the fall sports season that provides optimal flexibility was an important next step in the process.”

On Friday night, Bohn wrote to donors that the game with UCLA was “likely” to be moved to October or December.

As more students trickle onto Pac-12 campuses in August, Scott said that the conference is expecting some games will have to be reshuffled. He also acknowledged that some conference teams could wind up playing fewer than 10 games by the Dec. 19 title game.

“We’re going in expecting [an outbreak] to be a real possibility,” Scott said. “If that happens, especially with 14-day quarantine periods for anyone that’s in close contact, that will require the rescheduling of a game. So basically we have two opportunities for each team to potentially reschedule — or delay the start.”

It’s still unclear what level of contact or number of cases would trigger such a shutdown. Oregon State senior associate athletic director Doug Aukerman said the Pac-12 was still considering where to set that bar, calling it “a complex decision.”

Since their return to campus in mid-June, UCLA has not disclosed how many athletes have tested positive for COVID-19. USC reported zero positive cases from 120 tests conducted last week.

USC was initially scheduled to open the season with a marquee matchup against Alabama on Sept. 5 in Arlington, Texas. UCLA was slated to meet New Mexico State on Aug. 29, at the Rose Bowl.

The Pac-12 pivoted from those original plans on July 10, following the Big Ten in announcing a 10-game, conference-only schedule. Other conferences have since taken different approaches to scheduling.

The Southeastern Conference announced its plans for a Sept. 26 start date and 10-game season on Thursday. The Atlantic Coast Conference hopes to start Sept. 12.

In the Pac-12, new schedules included one new conference opponent, with UCLA adding a game at Washington (Nov. 21) and USC welcoming Washington State (Nov. 7) to the Coliseum.

But as several Pac-12 officials admitted Friday, plans are still subject change. When asked about his confidence that a season would happen, Scott said, “I don’t know.”

“There are elements outside of our control that are going to have a lot of influence on that answer.”

If the Bruins and Trojans, who traditionally play around Thanksgiving, were to play in September it would be the first time they’ve played in that month since 1945.

Larry Scott says that the USC-UCLA game was moved to Week 1 because “we realize at the moment those are real hotspots. The requisite authorities and approvals necessary aren’t there yet.”

Said the game could be easily rescheduled.

Bubbles? May Madness? A delayed college basketball season could require both