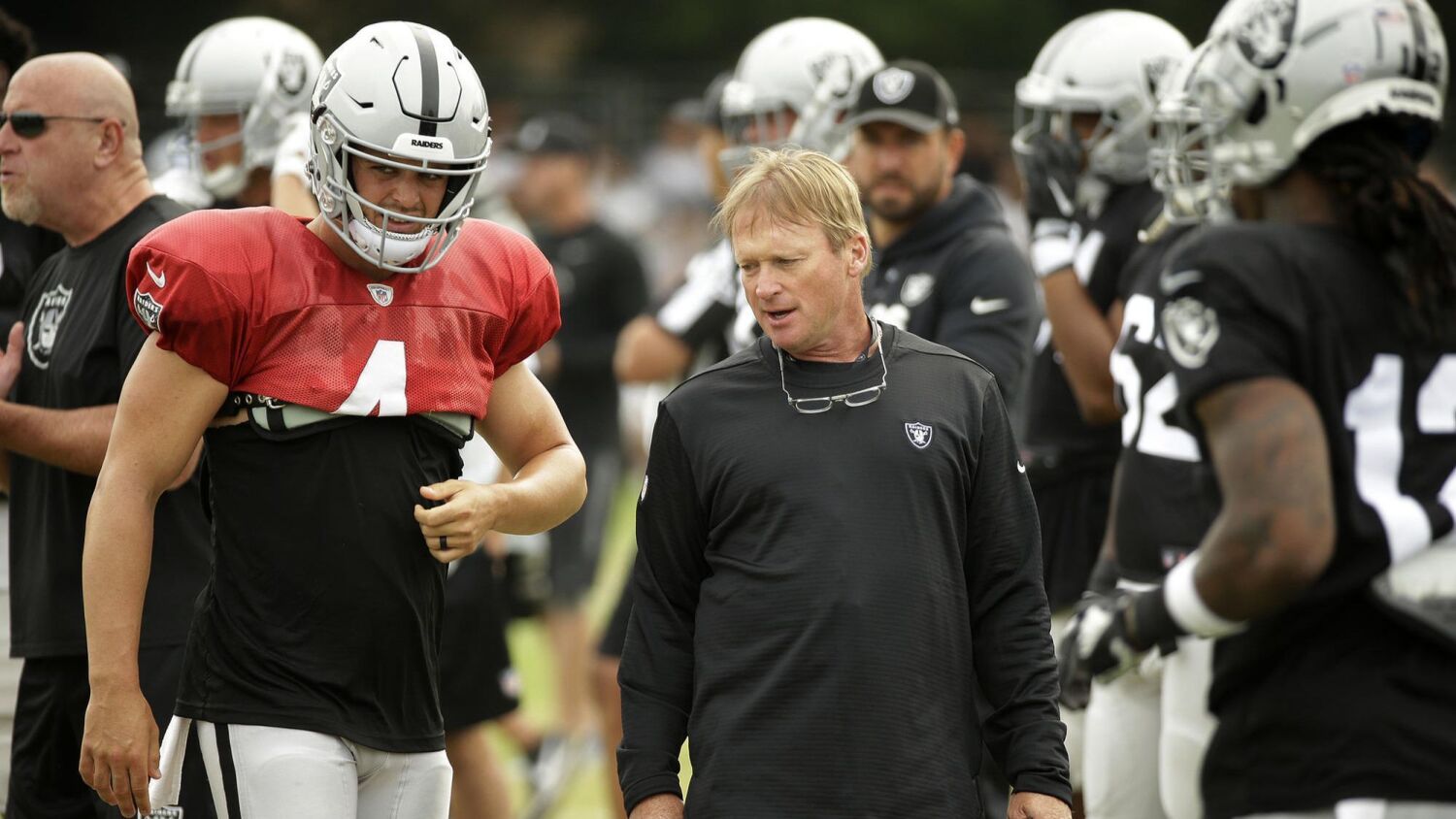 Who said Los Angeles NFL fans can root only for the Rams and the Chargers?

The Raiders’ move from Oakland to Las Vegas means there is another team within a four-hour drive from L.A. It’s no secret that the Raiders have a strong fan base in Southern California, and it’s reasonable to believe the faithful will make weekend trips to Sin City when fans are allowed inside Allegiant Stadium.

They probably will be expecting more success after the team finished 7-9 last season. It’s the third consecutive year the Raiders had a losing season. To turn that around, the Raiders will need to find answers to some key questions as they enter training camp:

How short will Derek Carr’s leash be?

The Raiders signed quarterback Marcus Mariota to a two-year, $17.6 million-deal in March to back up starter Derek Carr.

Mariota, a former No. 2 overall draft pick, started four complete seasons for the Tennessee Titans, but was benched in Week 6 last year in favor of Ryan Tannehill, the former starter for the Miami Dolphins who had signed with Tennessee in the offseason. Tannehill led the Titans to the AFC championship game and signed a long-term deal.

Carr threw for more than 4,000 yards and had a 70.4 completion percentage, but passed for only 21 touchdowns. Despite making three Pro Bowls, Carr has only one winning season as the Raiders’ quarterback.

Carr will be the presumed starter, but coach Jon Gruden could plug in Mariota, who is more mobile and athletic, if Carr doesn’t produce in the win column.

How will the Raiders’ receiving corps perform?

Gruden and general manager Mike Mayock thought they had solidified a No.1 option at wide receiver last offseason when they signed Antonio Brown.

But we know how that ended. Brown is now without a team and suspended.

To address that need, the Raiders drafted Alabama receiver Henry Ruggs III in April with their first-round pick. Ruggs ran the fastest 40-yard dash at the NFL scouting combine, clocking at 4.27 seconds. His speed should complement the group and force defenses to respect the long ball.

The team also signed free agent Nelson Agholor, the former USC standout, to a team-friendly one-year deal worth just more than $1 million. The five-year veteran could add leadership to the group and has a Super Bowl-winning resumé with the Philadelphia Eagles in 2017. He struggled last season, however, with injuries and drops.

Can Josh Jacobs build off his rookie season?

In 13 games, the No. 24 overall pick from Alabama rushed for 1,150 yards, ranking 13th in the league. He was a dependable option for the Raiders, averaging 4.8 yards per carry and fumbling only once. He broke the team’s rookie rushing yards record and produced five 100-yard games.

Defenses will have to game plan around Jacobs in his second season, but if they focus heavily on the run it might present more opportunities for receivers, especially with Ruggs’ speed spreading the field.

Will the new-look secondary be up for the challenge?

In a conference with pass catchers such as Tyreek Hill, Travis Kelce and Keenan Allen, the Raiders’ defensive backfield definitely will be challenged.

In the past two seasons, the secondary was completely overhauled. No starters remain from 2018. Camp for this group will be filled with new faces and should be very competitive.

The Raiders signed three veterans in free agency — cornerback Prince Amukamara and safeties Damarious Randall and Jeff Heath. In the draft, they selected cornerbacks Damon Arnette and Amik Robertson in the first and fourth rounds, respectively.

Mayock said he will pay special attention to the defensive backs at camp, especially these recent additions.

Can the defensive front improve?

The Raiders have been trying to redefine their pass rush since they traded Khalil Mack in 2018. Rookie defensive ends Maxx Crosby and Clelin Ferrell combined for 14.5 sacks last season, offering glimpses of what could be a bright future. The team collected only 32 sacks, however, and Crosby accounted for 10 of them.

It’s unrealistic to expect the secondary to cover elite receivers without a consistent pass rush. Offenses will shift protections to stop Crosby too if they feel he is the only threat.

Look to see how offseason additions Maliek Collins and Carl Nassib, along with third-year player Maurice Hurst, are used along the defensive line to apply pressure.

Can the team adjust to a new city and unusual circumstances?

All of the Xs and O’s might have been somewhat overshadowed by the team’s relocation to the Sin City, if it wasn’t for the pandemic.

The coronavirus forcing the NFL to cancel preseason games means the earliest the Raiders will play in their $1.84-billon new stadium will be Sept. 21 on “Monday Night Football” against the New Orleans Saints, and there might not be any fans present.

Trying to acclimate to a new city with no visual support will be quite a challenge. Plus, the Raiders certainly had expected fans to make trips to Vegas, but as camp begins — as with everything else in the NFL — there is a lot of uncertainty on and off the field.