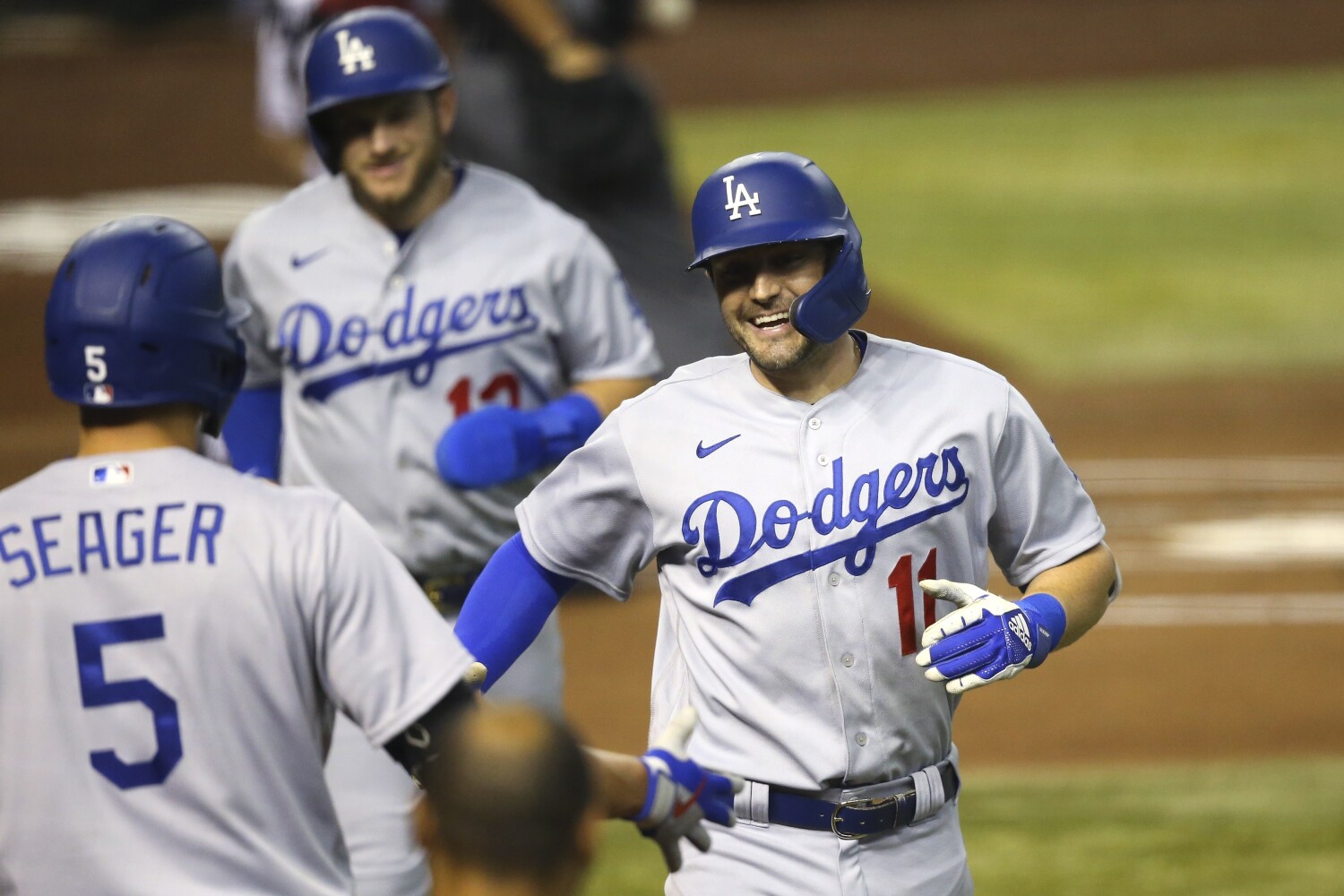 AJ Pollock tried to keep his newborn daughter still, gently steadying the shrieking and squirming 4-month-old in his arms.

His wife, Kate, had the hard job. After their infant, Maddi, had accidentally pulled out her feeding tube, Kate had to delicately feed it back through the child’s nose and put it into place.

“That was not very fun,” Pollock said Thursday, the Dodgers outfielder striking a typical new-father tone while describing experiences that have been anything but typical. “Holding a baby down while Kate is trying to feed the tube through her nose and she’s crying, it’s just a lot going on.”

To be sure, the last week has been cause for celebration in the Pollock household. After her three-months-premature birth on March 19, Maddi finally was discharged from the hospital last weekend. After 128 days, the Pollocks were at last able to bring her home in Phoenix.

“She’s been staring at the ceiling of a hospital for four months, so just seeing the ceiling in our house was overwhelming for her,” said Pollock, who began Friday night’s game, which the Dodgers lost 5-3 to the Arizona Diamondbacks, as the team’s early-season leader in batting average (.471) and on-base-plus-slugging (1.350).

“It was great,” he added with a soft smile during a Zoom call Thursday. “It was awesome.”

But it was also “chaos,” Pollock said. And how could it not be?

The biggest challenge for most new parents may be tag-teaming a diaper change. The Pollocks’ first day home included a mini-medical operation — a reminder of the realities that come with caring for a child that weighed just 1.6 pounds at birth (Pollock said earlier this month Maddi was up to 8 pounds).

“I’ve always had teammates that had a baby and they get to go home and their wife is pregnant and they see the baby and they go back; it’s a pretty planned, structured deal,” Pollock said. “For us, I had to go back, I had to learn a lot of things from the doctor before they let her go. So we did all that stuff. We had to get some things in order at the house.”

The fact that Pollock — who homered and doubled during the Dodgers’ 6-3 win Thursday over the Diamondbacks — has been able to keep his play in order at the same time isn’t going unnoticed.

“I don’t know how he’s been able to compartmentalize what’s going on in his life,” manager Dave Roberts said. “To come back and not miss a beat, it’s remarkable.”

Added pitcher Ross Stripling: “To get off to a great start after a stressful quarantine, having a baby [premature], it’s awesome.”

Pollock partially credits fatherhood for his hot start, which has occurred despite his two-week absence from training camp after testing positive for the coronavirus. It has cultivated a new perspective on his sport, placing his once all-consuming job into a more humble, balanced context.

“As a player, you think it’s more, ‘You’ve got to get your mechanics, you’ve got to do this and that,’” said Pollock, who played only 86 games in 2019 because of an infection in his right elbow. “Really, if you’re up there and feeling good, that’s No. 1. In some ways, maybe it just got me to say, ‘Look, keep it simple.’ I’ve got a lot of other stuff going on, so when I’m at the field, all this other stuff I used to do, maybe put that aside and really just focus on the important stuff.”

The 32-year-old compared it to playing pickup basketball — being able to show up and compete without overworking himself.

“You’re thinking the game, but you’re not getting stuck there,” Pollock said. “You give yourself the freedom to just play … use your instincts and not slowing yourself down.”

Pollock’s favorite baseball memory this season, however, happened from his couch. When he watched Saturday‘s game against the Giants from home, Maddi was in his arms. For a moment, everything felt normal. At one point, his daughter even cried.

“She just hasn’t really done that much in the hospital,” Pollock said. “It was a first for us. Just chaos.”

This time, it was the good kind.

The Dodgers sported a new piece of equipment Friday, with all eight position players wearing a blue face covering around their neck. The addition was one of several teamwide decisions amid growing concerns over COVID-19 outbreaks in baseball that reportedly could jeopardize the season.

“We’re going to have to be accountable,” Roberts said, noting that the team’s director of player health, Ron Porterfield, is serving as their compliance officer.

“Whether it’s guys on the bench, the ’pen, away from the field — all this stuff matters. We’ve come so far to get to this point. For it to be shut down because of people being irresponsible certainly is unacceptable.”

The idea for the neck coverings came after a Friday conversation between Roberts and third baseman Justin Turner, who later told SportsNet LA that the team would reemphasize rules about safety.

“You hear the commissioner putting everyone on notice,” Roberts said, referencing reports that MLB Commissioner Rob Manfred on Friday warned players’ union executive director Tony Clark that the season could be shut down if the sport doesn’t better manage the coronavirus.

“Everyone is motivated to keep going,” Roberts added. “But people’s safety and health has to be the most important thing.”

Clayton Kershaw will make his season debut Sunday, Roberts said, pushing Walker Buehler’s next scheduled start to Monday. … After optioning Josh Sborz to make room for Friday’s starter Tony Gonsolin, the Dodgers will be adding another player to their traveling taxi squad for next week’s series at San Diego. Roberts said pitcher Mitchell White is a candidate.